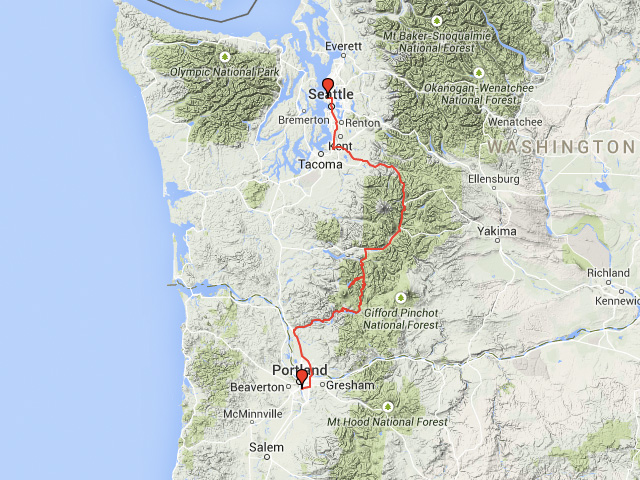 For a while now, I've wanted to visit Portland, OR. I'd heard it described as "Seattle's punk rock younger sister" – a playground for the artsy and experimental who flee the big cities to take a risk and do their own thing, enjoying Portland's geographic advantages, lower living expenses, and more pleasant living conditions. I heard it was a foodie town (say no more), especially with the farm-to-table movement. And guess what's along the way? An active volcano, woohoo!

Actually, visiting Mount St Helens was one of my favorite rides on this trip so far. The squiggly line on the map to Windy Ridge Observatory is a detour not to be missed. There is nothing, nothing, that feels as badass as riding up an active volcano. Carving my way through the shaded woods I couldn't stop thinking, She could go, any moment. Suddenly, you pass a line after which the forest turns to scarred earth from the last eruption in 1980. The massive sense of destruction is impossible to convey without being present, even 34 years later. A sportier vehicle passed me, and passed me again before I reached the observation point, but I did not care. I leaned into the curves as fast as I liked, blissfully lost in the landscape, happy to follow the twists wherever they took me.

The eruption severely changed the nature of nearby Spirit Lake, and a drainage tunnel was drilled to alleviate pressure from the new water pattern. At the rest stop for viewing the lake, a family lent me their binoculars so I could see my first elk. It was a tiny golden lump in the distance, munching on volcanic shrubbery.

I was staying with my father's colleague, Jake – another seemingly random connection, but I'm getting used to it at this point. Their kids were fans of the Guinea Pig Pet Shop Private Eye books that I illustrated, so I spent an afternoon making Shrinky Dinks with them.


I've never made Shrinky Dinks before. It was just as magical for me as it was for the kids, watching the plastic curl and settle in the oven.

The following day I was fortunate enough to have a tour of the Vernier offices. They're headquartered in a Lead certified building, exceptionally progressive, with fun details like the fireman's slide installed above (if I ever settle down, I'm definitely installing a slide). As a kid, I was inclined towards the sciences, perhaps due to my parents dispositions as an engineer and scientist. Growing up in a household rooted in rationality, I think I took left-brained thinking for granted. It was modus operandi, as natural as breathing. Sometimes I wonder if it had a direct influence on why I threw myself into the arts – a vastly different and unfamiliar puzzle. Touring Vernier made me nostalgic for my classically nerdy childhood of math puzzles and astronomy books. Science, exploration, and reasoning will always be the foundation of my approach to the world, even though my current job description reads "artist."

Besides, I have to cover up that I'm really bad at all that touchy-feely nonsense.

Portland bonus: I found Colin (underboning on ADV)! He's responsible for one of the ride reports that inspired me when I was planning my own trip. He showed up to the Tuesday night Twist & Play scooter club gathering on the Symba of the photos, the one that's been around the world. I could not have been more impressed. Totally fun guy, I was only sorry I couldn't meet Rebecca too.

We buzzed around the city the next afternoon, picking up goodies from Kim Jong Grillin for a picnic by the open reservoirs. Hanging out with Colin, I wondered if there are certain dispositions common to travelers. Perhaps a sum of qualities; a curious nature, quiet unflappability, openness to new experiences, tolerance for discomfort, and a thick skin for judgement from others for an unconventional lifestyle? In any case, it was great chatting about Portland, travel and food, which I learned was a common motivator for us.


Of course, no trip to Portland is complete without Voodoo Doughnut. Is that...breakfast cereal on a doughnut?! Something about the topping selection for these little fried pieces of dough seemed obscene, this coming from someone who enjoys foods like beef tendon and chicken hearts. Amused but intimidated by the zanier options, I selected a mild-mannered but still delicious lemon crueller.


We sat outside to consume our sugary treats, and found ourselves on the topic of extended travel logistics.

"I wouldn't mind if my storage unit burnt down. I'd happily take the insurance money to keep going." It slipped out from my frosting coated lips before I realized I said it.

"Hah, I'm so glad you said that," Colin laughed. He shared he'd often felt the same, and how he and his wife pared down to just enough belongings to fill a truck. "I mean, you've traveled. You've seen people with much less, you really don't need much." In the past they kept expensive furniture, but currently they're big fans of Ikea Poang chairs. Portable, affordable, comfortable, perhaps a better representation of what they look for in life and travel?

I'm certainly not attached to many of my belongings. The (dreaded) storage unit is full of things I mostly just don't want to have to buy again when the time comes to re-integrate (sigh). I keep books mostly so that I can lend them to interested friends, and I keep artwork so that visitors can have something to look at. A bed for myself, a desk and chair for work, and a few surfaces to place snacks and drinks just about covers the bases. A comfortable flat-packing Ikea couch for company, lamps for desk and bedside, and make do with whatever kitchen lands near me. People notwithstanding, that's plenty to make anyplace a home.

But it's people who make a place. It was great catching Colin while he's in one spot for a while. I hope he and Re continue to have fantastic adventures!


I spent much of my time cafe hopping with my laptop and sketchbook, stopping into food truck hubs if I happened to pass one. Portland is all sorts of alluring. The city limit keeps businesses close by, within walking or easy riding distance for sure. There's an active riding scene (Lambrettas in the wild!). Everything I ate was hand crafted, artisanal, overflowing with personality, or otherwise delicious. Coffee shops abound. Not only regular plain ol' coffee shops, but places like See See Motorcycles, a nexus where I can try on riding pants and have an espresso under one shop roof. I liked watching the bikes park in the motorcycle spots out front, carrying meticulously imaged individuals. On Tuesday, men and women wearing tutus kept passing the bar. There was no explanation, when I asked a local they just said, "There's always something going on." My love for cities stems around that feeling, that there's always something going on.

However, I definitely don't feel cool enough for Portland. I don't have enough tattoos, or scarves, or the right shoes. I wonder if I would have been ejected from more cafes were it not for a bit of red coloring in my hair.

In any case, I was rested and recovered during my stay with Jake and his family. Scoot on!
Posted by 250cc Superhero at 9:16 AM