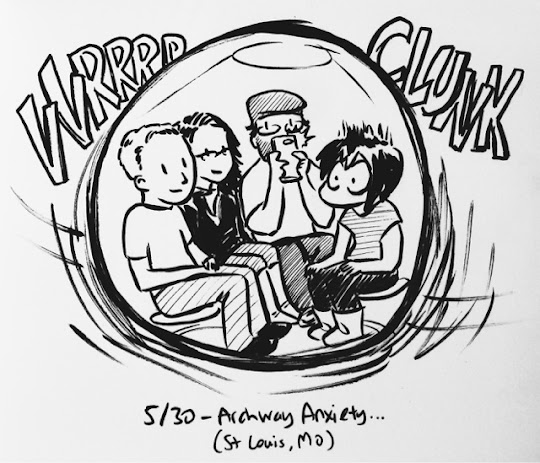 Remember Chris, from riding around the Ozarks? He picked up a bike in Wisconsin, and was riding home, conveniently via St Louis. Due to rain, Brittany, Myke, Chris and I piled into their car to go to the Arch, and then had some amazing BBQ at Bogart's Smokehouse. A brief stroll around the farmer's market and to Civil Brewery barely put a dent in the smoked meat. Myke's scooter friend, Tom, was playing at The Venice Cafe, which appears to be a what would happen if a flea market went drinking with an antique store and then threw up. It's awesome, there's so much to look at, to the backdrop of some awesome surf rock. I heard that Tom just bought a GTS...for touring! Bwa ha ha...
Posted by 250cc Superhero at 9:03 PM