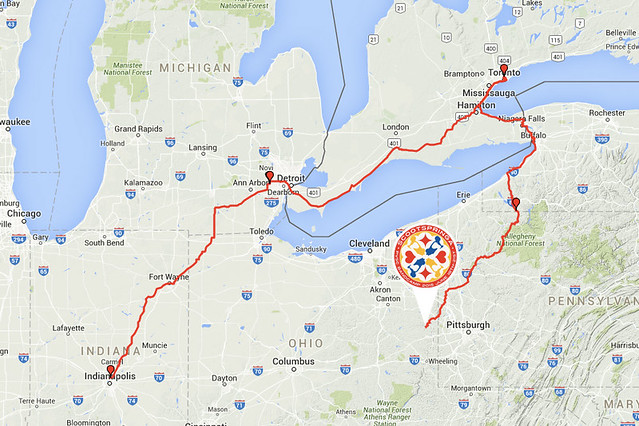 Prepare yourself for mud you only discover months later in places you didn't think were ever exposed, and shenanigans on small motorized vehicles. We're going Toronto, ON to Toronto, OH, with a crazy Milano and a Buffalo kid, and the answer is yes you drank that many muddy tiki drinks.


The ride to the AirBnb in Detroit was unremarkable, save that Davide and I proceeded with our usual goofing around and I discovered I could operate the scooter without hands (overcome front end wobble by going at least 60mph, apply throttle lock, lean farther to the left than you think...it's a self-driving scooter!).

We dodged between two storm systems and checked into our overnight destination just as drops started to fall. Did I mention the room was dirt cheap because it was unfurnished? Welcome to the magic of indoor camping, Davide. In further acts of magic, we ordered Thai delivery because it was still raining and we could spirit forth food without getting on the bikes. This is the life.

We arrived at the home of Wally, a scooterist who had reached out a while back, much later than intended; the Stanley Cup was on, but since there were no Canadian teams playing he was able to step away to let us in. Immediately after we hauled our damp, smelly, gear-laden selves into his cozy apartment, he handed us each a bowl of fried rice with lapcheong he had fixed. I still can't fully express the depth of my gratitude, except by shoveling all the food in my face. The rest of the evening was a comfy blur of Radlers (Wally's preferred beverage) and looking at Wally's photos from the Cross Egypt Challenge last year (scooter world coincidences!).


The other reason I took Davide into Canada as an alternative to a straight shot to Pittsburgh was that I heard that Gene and Neda of RideDOT.com would be in Toronto giving a presentation about their journey. I couldn't actually make it for the presentation, but Gene suggested a KTM demo day and a nearby Tim Hortons instead where we could also meet another ADVer, Brent.

I feared that there wouldn't be a machine I'd be able to touch the ground on, but I actually really enjoyed the Duke 390. It's great to be back on a motorcycle, especially one that I flat foot, weighs less than my Vespa, yet has twice the horsepower! They said no wheelies, but you know I haven't used a clutch in a while...

At Tim Horton's after (because, Canada), we finally got to hang out and chat. In planning for my own trip, I found Gene and Neda's blog (RideDOT.com) about their worldwide journeys, and have been following them...for years now. It sounds less creepy on the internet, really. It was surreal at first to meet them in person after reading about them and seeing their photos, but soon the afternoon slipped away to talking travel and exchanging stories. It was great chatting with them, and Brent too, who's also passing through on a solo long distance trip.


In many ways, it was affirming to hear some of the behind-the-scenes thoughts and challenges they faced and how they evolved, since they're a couple that has gone longer and farther than myself. From little things, like needing a portable hobby (needlepoint for Neda, knitting, for me), to more emotional things, like breaking the notion that it's all cocktails on the beach...and then reliving darker times to share on a blog. Then there's also the privilege and curse of travel fatigue. I don't feel so alone, for someone who primarily travels solo.

Good or bad, I feel it's my emotional capacity that runs out long before physical endurance, and there isn't as much a point of traveling for me if I'm not open to taking in the people and places I visit. It was a fun and encouraging meeting. Exploring beyond the North American continent seems daunting, but maybe more so because it's actually within reach.

It was a reflective ride along the 401 back into the city to meet Wally, and Toronto Scooterist Edward.

Ed reached out to me through the blog, and offered to make Davide and I brunch in his shop. This barely describes what is actually his 'shop' and a mere common 'brunch'. I was confused as we pulled up to the correct address, a storage facility, but the front desk casually directed us to where Ed rents the boiler room in the back.

Ed's shop is the kind of place you try to concoct when tasked with making concept art for some modern Renaissance salvage yard urban fantasy wood/metal/magic studio. There's supplies, hand-crafted items, and repurposed finds on every surface. It is literally tucked away in the boiler room of an operational storage facility. And it's a loft, with a suspended bike, and he's all set up with a hot plate, cooler, running water, and a ladder to the upper level. A lot of it is rescued from dumpsters. It's a fantastic jigsaw puzzle of a place, every shelf brimming.

Back at Wally's, he surprised Davide and I with an idea: Scooter food tour of Toronto.


I really can't say thank you enough to Wally. I'm coming to realize that any place a person visits can be vastly different, depending on who shows it to you. From our brief stay, I would say Wally's Toronto is a fantastic, diverse feast, a playground devoted to food and the good preparation of it, and he guided us through it like lost and hungry two-wheeled ducklings. But even with the delicious eats out and about, he already won me over with the first post-ride meal in his kitchen – it reminded me of something I might make at home, but better because it's been such a while (also because I didn't make it!). Foodies unite, thank you so much, Wally!


A whirlwind stay for a few days, the packed social calendar isn't done yet...

Davide knew there would be some trouble with re-entering the U.S. with his student visa, and he was predictably delayed at the border. I waited in the lot just past the Rainbow Bridge for him, and for a third member of our party to show up; I'd kept in touch with Jack, the guy I met in Austin. He was back in his hometown of Buffalo for a while, broken foot healed and reunited with his bike. It wasn't long before a DRZ400SM pulled up, with a familiar happy rider.

After an hour or so (I'm not sure, I was busy catching up with Jack), the crusty Beemer came through the gate. Davide pulled up to Jack and I, flipped up his visor, and in his clipped Italian accent said, "Well that took forever, but I think they missed the gallon of maple syrup I smuggled in a balloon up my butt. So, where to, guys?"

The bridge out of Buffalo was lost in fog so heavy that our bikes seemed to be floating motionlessly in white. It was eerily like Silent Hill. Wait, are we already dead?

If so, the company was alright. Even pitching our tents in the drizzle didn't bother me. Maybe because they also have to get up early to to ride, ha ha...

Again, the company helps in events like a breakdown. I didn't mind some downtime to hang out with Jack, and the skies cleared up just in time for us to be back on the road. We followed the Allegheny River part of the way, and when I saw a fun, twisty road ahead on the map I'd wave the guys ahead. Jack would pass me doing a wheelie, with Davide shortly behind. I'd find one or both of them waiting for me up ahead, and take the lead again. Then there was the train dancing...

In spite of the setback we made it to Bandcamp by 9pm, at least an hour improvement on last year! 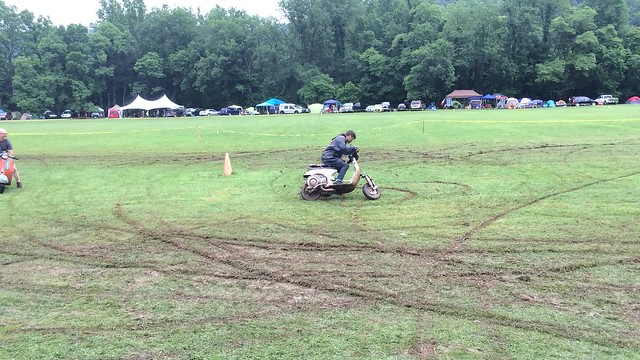 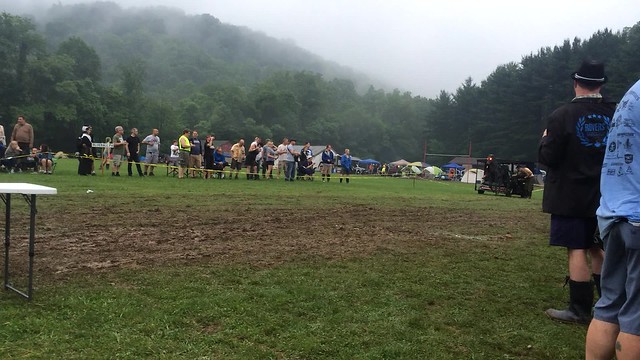 To this day, I cannot explain the appeal of a bunch of scooterists camping around a muddy field. It's held in a valley that traps rain and moisture that turns the 'track' into mud. The septic system isn't designed to handle such a crowd and gets overwhelmed, and this is especially problematic given the tendency to turn into a human cocktail. I won't even begin to explain the absurdity of games and prizes. Maybe it's just what happens without cell service nowadays. Every year demands human sacrifice, usually carted away in an ambulance. Sleep is fitful at best, especially this year as the only place to pitch my tent was on an incline. And yet, it will be the party that the other big scooter rally right around this time of year, Amerivespa, could never be (or want to be, I suspect).

Sunday morning, the field begins its transformation back to 'normal' but the rest of us will bear the scars. Once the school bus gets unstuck, it'll be like it never happened. You just have to be there for that special time of year when Bandcamp is Bandcamp.
Posted by 250cc Superhero at 1:48 PM