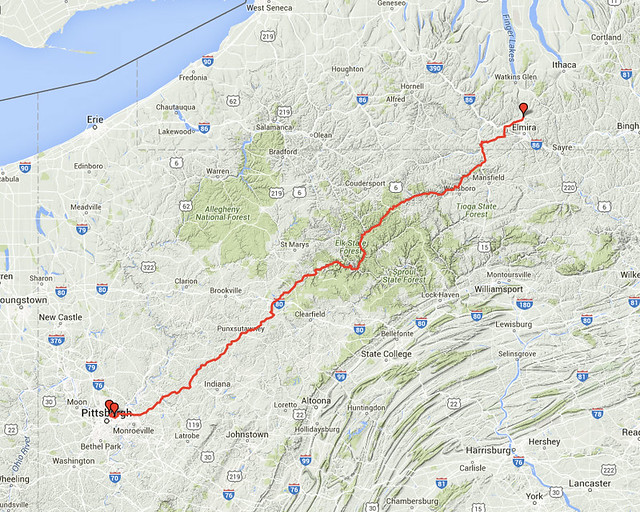 The red eye flight back east was predictably punishing, exacerbating the soreness between my shoulder blades that rafting failed to banish, but there were two things I was very much looking forward in Pittsburgh: Jack was back, and I'd soon be reunited with my own bike!


We immediately made tracks to Slagheap, but we'd caught Geoff at an off time and he wouldn't be in for another hour – a perfect opportunity to nap in a nearby park with Jack. I had the luxury of the entire day, since I'd be crashing in town with Eileen.

When we pulled the tarp off my scooter in Geoff's shop, it was the same sense of relief I felt after Serenity had been at the Vespa SF shop for weeks. Here she was, so familiar, exactly how I left her. I felt like I was coming home. An oil change and a milkshake with Geoff and Jack at the local diner later, and we were on our way.

Getting back on my bike after riding a spanking new 300 Super up and down the PCH, well... mine was broken in alright. The phrase 'well-churned butter' popped into my head, everything a little slippy, worn smooth, and soft in all the right places. Sure, the 300 Super might be all tight, shiny pickup and have more storage, and the ABS is a good idea (though I curse the traction control every time), but it seems when I ride other bikes it serves only to remind me how much I like my bike. I patted her headset, I would never trade you for a new 300, I whispered.

At the end of a full riding day playing in the forests (on one stretch, we went to bump fists in motion and had to grab the bars and swerve to avoid colliding, at another stop I went to pinch his nipple and he responded by jerking off my handlebar...good times, good times), I gave Jack the biggest hug and he turned northwest back to his hometown, Buffalo, NY. I would be meeting Tim again at his parent's place in his hometown, Horseheads, NY.

It's difficult for me to rest, especially because after all this time I wanted to see Tim's home turf (c'mon, sitting in a car, that's totally resting from the bike). Swimwear on, we breezed by Watkins Glen with plans to go for a dip in Seneca Lake. It's the deepest lake in NY state, maintaining a near constant, chilling temperature 39 F (4 C), a fact I'm fairly certain Tim failed to mention. He managed a swim, but I think I made it about calf deep before deciding I wanted to keep all my fingers and toes for the ride to Lubec.


There was still one piece of culture here I needed to experience before leaving: a tractor show!

Tim's mom stopped by a riverbed by one of Tim's dad's pick up points, to select some stones for her garden. I took the opportunity to find a nice round massage rock. The pain between my shoulder blades had only grown sharper since California, almost like a physical manifestation of the pressure I felt to check off my final corner. The ibuprofen flowed steadily just to function between the wincing. At night, I rolled the stone between the mattress and my knots, desperately trying to unravel what was probably bunched up anticipation for the full days of riding ahead.


Tim got me hooked on these tomato sandwiches: still sun-warm garden tomatoes on white bread with mayonnaise, salt and pepper optional. I think they aren't nearly as good if it's not from their garden, though.


Thank you so much for your hospitality, Tim, Tim, and Mary Jane!
Posted by 250cc Superhero at 6:45 PM