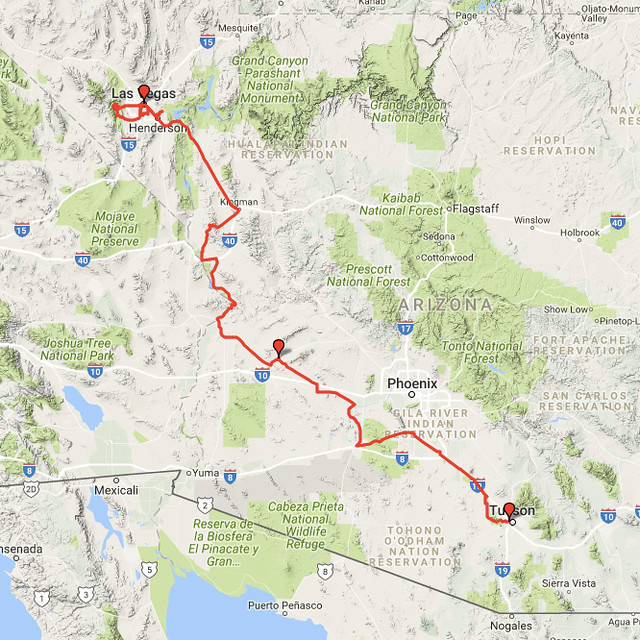 
It seemed even our slight turn northward resulted in a sharper drop in temperature as soon as sunlight faded, and our fingers were numb by check in. Our gear was unceremoniously chucked onto every surface so a hot shower could be attended to. It was swiftly followed by nuking some soup in the microwave, opening the beer, and pillaging our collection of Trader Joe's snacks for dinner. We ate in bed to the soft sound of reruns on TV, sharing an unspoken agreement not to go outdoors again for the rest of the night. It was like that, in bed surrounded by jerky wrappers and with the lights still on, I passed out confident that I'd demonstrated to Fred the finest scooter travel could offer.


I think left before we definitively found out how 'Salome' is pronounced (Wikipedia says 'Suh-loam'). Along the Colorado River near the Parker Dam were clusters of RVs and boats, but they appeared eerily deserted. Another stretch of just two scooters along a river, it felt like we were the last people on earth.


Fred, figuring we're close enough, opened the P200 engine wide and we flew over the Hoover Dam at 65mph. The brilliant orange sky faded to deep blue as we hit the first traffic lights of Vegas. We checked in under cover of nightfall, which is to say around 7pm.

And we were asleep by 9:30pm. This party is pooped.


A few stats for this leg of the journey: When we compared mileage, we discovered our counts were similar at about 2,200. From start to finish was 10 days total of riding, 3 days setup in Austin, 1 'rest' day in Big Bend, 1 rest day in Tucson, and 4 days remaining to rally rally rally. We rode in 5 states and 3 timezones. On the last day we crossed into California briefly in Parker, making it a 3 states day. We spent 5 nights with friends, 4 nights in motels/hotels (the first in Kerrville featured a Texas shaped waffle iron and patrons sporting black cowboy hats trying to negotiate the rate, reinforcing villainous or at least slightly sleazy black-hatted stereotypes), 3 nights camping, and 2 nights at a hostel. Including the group rides with LVHR, Fred used all 4 liters of 2-stroke oil. Breakdowns include one fuel line falling off (Serenity) and a broken clutch cable (GL).

And now, to rally!

An excursion to Frankie's Tiki Room was a given, but Fred claimed to have a novel way to make my tongue tingle if we're willing to go to the Strip – how could I refuse? We headed to the Chandelier Lounge in the Cosmopolitan for The Verbena, a secret menu cocktail. Instructions were to first chew the flower bud, a Szechuan button, then make like Alice down the rabbit hole and drink the drink. The cocktail was similar to a margarita at first, but after thoroughly macerating the flower I began to get a sensation like sparkling water constantly sitting on the surface of my tongue. It felt like my salivary glands were going full tilt, but actually much of the sour element of the cocktail was neutralized by the kind of 'numbing spiciness' found in mapo tofu. It made for a confusingly smooth and buzzy experience. Leave it to Vegas to turn mapo tofu into a margarita.

Also, that bar is beautiful.


We went this far without a flat, so why not get one at the Strip? The best part was how Fred was nearly arrested on the rescue mission, for 'stealing' a ramp from his friend's unlocked van – security looking on didn't know they were already acquainted. The ramp was returned safely after the GL was buckled in, nothing on anyone's records.

Lake Las Vegas had the authenticity of a movie set, so Cyd, Fred, Marco and I bailed in favor of a sign for Crystal Palace Skating Center on the way back...

There's a sadistic side of me that enjoys watching the varying discomfort levels when other's feet are replaced with 8 wheels. Cyd grew up in an era when this was just what kids did for after school, and Fred was a skater and thus natural on wheels. Marco, however, had never skated, and spent about an hour dragging himself along the outer wall before progressing to another hour of slow shuffle. I did my best to teach him to skate, but eventually the training wheels had to come off. At least he was enthusiastic.

As for me? It was exhilarating to be on quad skates again. It brought back memories of roller derby days, and I regaled Fred with various drills with did in PRD. Every so often Cyd would skate by and mime body checking me, and then pretend to flail and bounce away. I counted Marco as 1 point every time I lapped him. With wind in my hair and rumble beneath my feet, I began to wonder if I should cross the continent on roller skates. Apparently I like going around in circles, on all sorts of wheels.

If you think that dress looks familiar, you'd be correct: I wore it for Davide's wedding! I left a small flat-rate box with Tim Orton when I stayed with him in Herford, NC. As Fred and I closed in on Vegas he shipped it to the hotel concierge, who held it for me until arrival. Thanks to Tim, I have lady-clothes to flounce around in at the rally!

Until Sunday, I'd been focused on getting to Vegas and enjoying my numbered days with Fred. With raffle prizes allocated and scooterists catching their flights home, the question was, What now? Do I relent to travel fatigue, store Serenity in Vegas, and grab a flight to Boston with Fred? Do I ride on, in spite of exhaustion and longing, which is to say the same old for me? Perhaps I set the bike aflame and pursue a completely different path. I thought I was playing tour guide on this trip, but maybe I was the tourist in Fred's life. How would I know?

On the morning of February 29th, with a lump in my throat and a fist around my heart, I packed up the bike. The open desert road soothes all. By the end of the day, I'd crossed the mountains and could smell the Pacific again.
Posted by 250cc Superhero at 11:25 AM