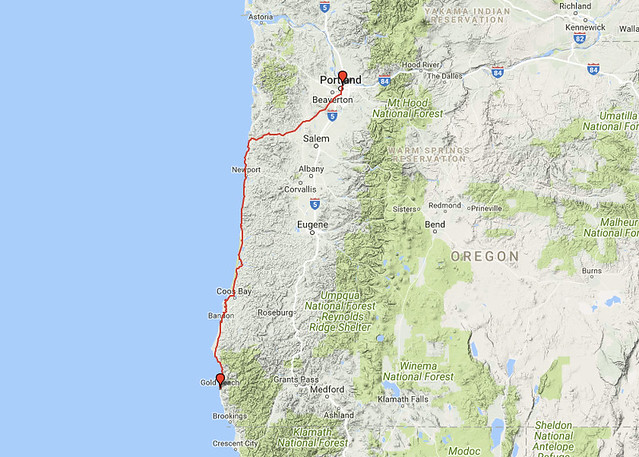 Time had come to part ways again. Pete had pushed his dog-sitters to the limit, and he would have to slab it all the way back to San Francisco in a single day (480 miles, blasting my day record out of the water on his first overland haul. Aw). I had a more moderate 300-ish mile day ahead of me to one of my favorite cities, Portland, OR.

In the morning mist, our farewells were brief and without fanfare; we were eager to tackle our independent miles. For my part, maybe I hustled a bit to get my gear on because in your helmet, no one can tell if you're crying.

True, I finally got to fulfill my long ride with Pete, and I knew he would make it home in one piece. I was finally pointing my bike at new adventures, and the coastline was ever majestic. I relish the freedom of solo travel, so I wasn't just choked up from parting ways. The road closures, spark plug issue, and most of all Pete's energy kept me blissfully distracted from a longing that had been clinging to me like San Francisco fog.

A part of me just... wished I could be making some of these fantastic memories with Fred. I wanted to say stupid shit on the intercom with him, like, "Ohh, that's beautiful," "Ow, watch that bump," "Those clouds look foreboding," and, "Next stop for a pee break," – inane, daily exchanges, layered between the spectacular. What becomes of a relationship when your most formative memories are made apart? We could Skype at every wifi opportunity, but what if the bulk of your best memories, and eventually your lifestyle, become things you never get to share? Without Pete or Moose, for the first time since San Francisco I was finally left alone with my thoughts, and they gnawed at me from inside my helmet. There was only static on the intercom, under a steely Oregon sky.

I made a mental note to add new music to my riding playlist.

Having opted for an inland route last time, this would be my first time along the Oregon coast. I figured I'd check out the beach camp where I'd originally planned to stay, a free site near Coos Bay.


If you drove past the Bastendorf Beach Park campground to the end of the Coos Head Road, there's a quiet, open area you can camp free for a night. With a nearby fishing town for sundries, for a moment I considered pitching tent...and then realized I'd just be moping about in addition to having to empty my tent of sand in the morning.

Besides, the illustrious Sara Ryan, my roommate from agency retreats past, was expecting me in Portland! And there would be food!


Getting a proper welcome back to the city, Sara and I walked to Grain and Gristle, one of her go-to neighborhood spots. Ah, craft beer, cocktails, charcuterie plates, and curled mustaches – the urbanity. Along our walk home, she also pointed out a corner that delivered all the PDX vices in one convenient block: a coffee shop, liquor, beer and wine store, and weed shop in one square. The urbanity, indeed.

I slept like a rock on their leather couch. There were a few Vespa things to take care of in Portland, but mostly I was here to see friends and eat food!


An unexpected experience came out of meeting Shannon and Justin for dinner: Justin worked at a coffee shop that was partnered with Float On, a float tank therapy center. He had unlimited free floats as part of the deal, and he and Shannon both spoke highly of the experience. I'd heard of the benefits of isolation tanks and was curious, but like bungee jumping, I just hadn't sought it out. Justin hooked me up with an appointment on the spot, because he's awesome like that.

My float appointment was up, and a soft-spoken host led me to my room. Float On had a medical-spa-meets-hippie kind of feel to it (they have float books and crayons for your to draw your... hallucinations?), and I was ready to give it a try. The standard float time was 90 minutes, with benefits of perceived weightlessness ranging from being able to slip immediately into a meditative state, to a release in creative energy, to muscle relaxation. The host gave me a short orientation and left me to my private room. I applied the orange putty to my ears to lock out salty water, undressed, stepped into the tank of calf-high water, closed the door, and turned off the light.

At first, it was just watery blackness. I still had a memory of the blue-lit room behind my eyes, and it's not that you can't hear anything – splashes are amplified with the earplugs – so you need to stay quite still. Once that was accomplished I had the not unpleasant feeling of slightly spinning, much like going to bed after one too many libations. Breathing was a loud, regular whoosh, and my heartbeat was the only other sound.

Thoughts drifted and I let myself become disoriented, until eventually, I started to feel uncomfortable. The buoyancy of the water meant my legs stuck straight out somewhat awkwardly, and if I moved them I'd hit the bottom. My shoulders felt like they floated right up to my neck, but every time I reached to check, they were in the right place. At least my boobs were not cold (something Shannon had warned me about), but anytime I moved I lost that sense of boundary-less-ness – I could feel the surface tension of the water, pulling at the edges of my face and hands. The water is kept at 93.5 degrees F to be skin-neutral, so you can't tell where you end and the water begins, but I could, and I just wished it was hotter.

More noticeably, I could feel whatever I had for lunch (it was pie, now that I thought about it), bubbling in my gut. It sounded like balloons were rubbing against each other in my abdomen, echoing in the watery chamber with the promise of future farts.

In the vacuum of other sensations, what was left manifested itself as pain. Pain in my knees, from holding still sticking straight out. Pain in my shoulders, which felt like they grew directly from beneath my ears. Pain in my abdomen, cooking up gas. I didn't think of myself as someone in regular pain, but with nothing else to focus on the pain became my world.

My breathing and heartbeat were the only sounds, and my heart rate was climbing. I tried to breath slowly, assuring myself this was an exercise in relaxation, but my rapid heartbeat betrayed me. It pounded against the pitch black walls that felt as immediate as my skin, and soon my saltwater slick hands were searching for the light switch in a void of space.

The room was plunged back into that eerie blue light. I sat still, semi-submerged, knees under my chin, panting. The warm, sticky air clung to the inside of my mouth. I felt nauseated. Opening the door delivered the cool burst of air I craved, but a glance at my phone told me I had only lasted 40 minutes.

I had plenty of time left, and decided to try again. The discomfort and emptiness pressing in came sooner though. The worst part, once I gave up and sat up, was that salty water dribbled down my face and into my eyes. The sting was like an ultimate, "You're doing it wrong! You're a failure at relaxing!" slap to the face, and I had to towel off my head and face between the tears.

When I finally showered and walked out to the front lounge, I was a little shell-shocked. I felt exhausted, disoriented, jittery, and my hands were shaking. Overwhelmingly, I wanted to curl up somewhere warm and comfortable and real, and feel the weight of blankets and the loft of pillows.

They gave me plenty of time to sit in the lounge and sip an organic ginger tea. I can't believe people fall asleep in these. I'm extremely grateful for the experience (thank you, Justin!), but I couldn’t help thinking I would rather have a massage.

Anyway, back in the physical world I had a dinner with Jenn and a bunch of cranky old Lambretta guys at Horse Brass Pub to get to. Save me some meat pie.

Somehow, it never registered that Rogue Brewery was based in Portland. A matter of blocks from where Shannon and I lunched, the Rogue Distillery and Public House, were at least two more breweries. It's a veritable avenue of fermentation. I'm not usually a beer person, but Cascade Brewing Barrel House drew me in for their dizzying selection of barrel-aged and tasty sours.


Sara had been swamped with work, so it wasn't until my last night in PDX that we found time together with her, Steve, and fellow BGL client, Jen Reese. As we walked down Alberta to Vita Cafe, she told me about how the neighborhood had changed in her 15 years of living here. It was great to see Jenn again, and talk would wander from current fandoms to local gatherings to industry...and for once, I found I didn't mind shop talk in my 'off time'. Normally my hackles are up to keep such a divide between work and the rest of who I am, but here were people who just flowed. It was refreshing and comfortable.

Sara made it clear I was welcome to crash on the couch as long as I needed, and the pull to stay longer was strong. It was comfortable and familiar here, and my creative friends and scooter friends were always near. I could just stay in cozy Portland, eventually find a place of my own. Why was I so eager to cast myself out, to far-flung places like Alaska?

I suppose I could simply say it's the 49th state, one more tick mark on a checklist to complete. But that would be selling it short.

Perhaps, travel changes a person, and I'm not the traveler I used to be. I'm certainly a different person from the first time I came through Portland on a Vespa. I've grown in experience, I'm more tired, and yet I still seek to feel 'out there' again. I crave further borders, to be brought outside myself, find wonder, and to share it with others. After so many solo miles I wish I could share it with immediate company, but seeing as it's just me I'll push for the next plausible thing: the frontier, something Alaska has a long reputation of delivering. Something like that.

I crawled into my last night on Sara's couch with a hint of melancholy, but felt ready for the next place. I guess I know I'm rested enough when I pull up Google maps and go Ooh instead of Ugh.


It’s a curious feeling, when your long awaited plans come to fruition. I’m much more used to plans being thought of as far in the future. It should be no surprise when they become immediate, yet when the moment arrives I still find myself caught off guard.