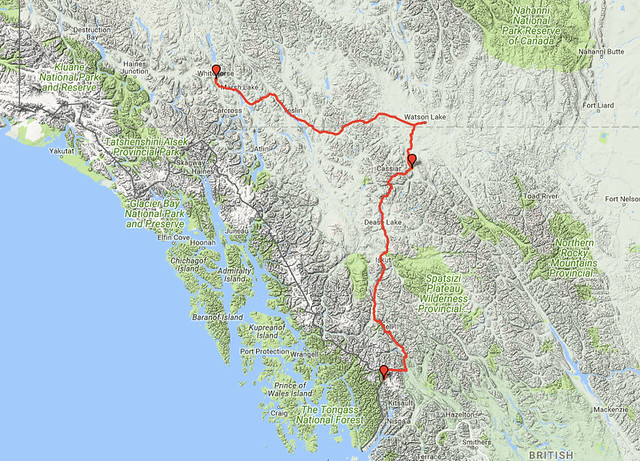 I had a few campgrounds (recreation sites, as they're called) along the Stewart-Cassiar in mind for the next stretch. I knew I would be riding through some remote places, and figured I'd just go until I felt ready to stop. It's a supreme luxury, the freedom to go till whenever, with no one expecting you anywhere, anytime. I suppose it depends on the person whether they find that freeing or concerning.

I was happy to wake up unmolested by bears, but mosquitoes were another thing. They were still relatively sparse early in the season and didn't bother me with gear on, but they were huge. The bloody spatters resulting from riding through a cloud of them would give Pollock a run for his money. The ride up Salmon Glacier road had coated the accumulated bug innards with dust, and it was time for a proper cleaning.


Hyder was a ghost town, but Stewart was still a sleepy community. They made up for it by being exceptionally welcoming. Temptations Bakery, the only place open for coffee, had so many stickers and handwritten iterations of "So-and-so was here," the scrawls climbed up into the beams. They provided me a Sharpie to add my own.

Everyone present seemed local, but a kind trucker struck up conversation over coffee. I did my best to decipher his very strong accent. Thank you for the coffee, accented Canadian man.

Everyone at Bell II (there is a Bell I but it's never on maps) was on their way to Alaska for seasonal work. The last thing resembling a community for miles was the Dease Lake gas station, where my bike decided to have difficulty starting. A couple instances earlier it seemed to hiccup on the road, or was that a gust of wind? Perhaps bad gas? When I checked the spark plug it hadn't budged. My red Loctite was on hand, but that freedom-fear scale made a brief tip in the other direction.

I passed many lakes that were still frozen or had old snow clinging precariously to the edges. Much like upstate NY, I read that glaciers had carved and fed the long deep lakes in this region.


The sun was still high around 7:30pm, when I arrived at Boya Lake Provincial Park. A soft twilight began to fall around 8, when my tent was pitched. I couldn't have found myself in a more perfect place.


I took a walk around camp with Gwen and Genevieve from Anchorage. They were driving a sprinter van up from Portland to Fairbanks. We chatted about Hatcher's pass, the ferry to Kodiak, and much more. It reminded me how much was ahead, and that I should pace myself. I'd bump into them again returning from Watson Lake!

In the absence of bear lockers, I attempted to be responsible and hang a bear bag. It was the most ludicrous thing I've ever attempted, and I'm glad no one was there to witness. After many snags and missed throws, I left my snacks and toothpaste hanging over a low ditch and figured the bears could have their minty snack if they wanted it so bad.

I loved arranging the tent so the window would face the lake and mountains. Looking out from between the giant mosquitoes settled on the mesh, I reveled in such good fortune that each night I get to set up a new home. But each morning I had to tear it down too.


Around 11:40pm I woke briefly, and there was still light in the sky. A loud splash echoed across the water around 3am, when a caribou decided to take a bath in the lake. The sky was already brightening. The extended sunlight was addicting, I was really going to have to work to pace myself.

On Highway 37, there were just enough bumps to keep me awake, and the constant company of snow topped mountains punctuated by emerald lakes. I wondered whether their beauty would ever become plain, like air that you simply breath in. When people here go to other places, do they find it terribly dull? A Sri Lankan guide once shared that travel was difficult for him, because foreign food tasted like water to his spice-acclimated palate.

A long stretch of gravel construction slowed me, but otherwise the pavement from the Stewart-Cassiar and Alaska Highway to Whitehorse was utterly tame. The highway rode a fine line between zen-like serenity... and boredom. The scenery was expansive but looked the same for hours, then you would come upon a small lodge of a town. A part of me wished I had a big bike up here, to eat up such great distances.


Whitehorse, with a population of 25,000, was the biggest city I'd seen since Vancouver. Rolling in, I felt giddy with the traffic lights and people and civilization. I needed a rest, and the Beez Kneez Bakpakers had bunks and blackout curtains.

This blue midnight sun is weird.
Posted by 250cc Superhero at 3:19 PM