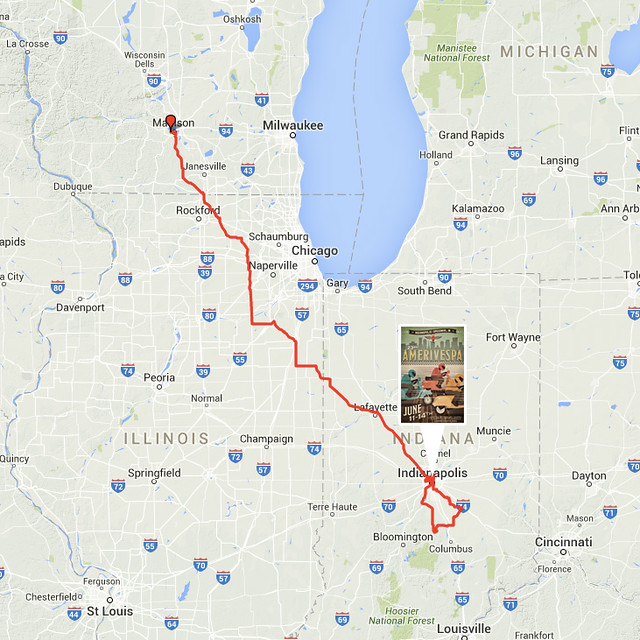 It's scooter party time! Skip this post if you're sick of seeing photos of a bazillion scooters, or Davide's face. Yep, it's round two of rally-to-rally riding with the crazy Italian on a Beemer. Besides seeing people, the big draw for me this year at Amerivespa was that we'd be allowed on the Indianapolis Motor Speedway?! Rally on...

It was great being back in Indianapolis – I actually sort of knew my way around, I could take friends to eat at Yats again, and I'm already familiar with the Indy Hostel.


Liability forms, rule sheets, and hours of anticipation later, the line finally started moving...we were going to ride on the Indy Speedway! Unfortunately, by this point it had also been made abundantly clear that there was to be no passing, no wheelies, no second lap, no shenanigans of any sort, and they would be enforcing a speed limit of...35mph. Thirty five miles per hour.

The flaggers waved us onto the track. The track itself opened wide, a huge expanse of beautiful tarmac, and at an angle steeper than I anticipated. It was all I could do to not immediately pin my throttle. I mean, what are they going to do, kick me off the track? I'm not coming back anyhow...

But I behaved on our 35mph scooter lap, and we filed off the premises like model citizens.

Which I sort of regret, but hey.

I'm actually not entirely sure what we did the rest of that evening. Not in an exciting way, Davide and I probably streamed Orange is the New Black at the hostel with more Prosecco.

There was a lot of waiting around this year at Amerivespa. Several sweaty hours in the staging area waiting for our turn, I had to find a restroom. I admit, I lied to the classy liquor store when I said I'd buy something. I just shat and ran. This is for the speedway!

The parade itself, once we rode it, was a great colorful party. Achievement unlocked: High fives down the line on a scooter.

Back at the hostel, we had a couple hours to nap and get dressy for the banquet. My shirt and bra reappeared on the dehumidifier, but I actually had an entire outfit in mind this time! After living on my scooter this long, I'm relaxing my survivalist standards of minimalism.


Another Amerivespa under my belt! With a quiet farewell to Jackie, Davide and I and peeled out of the official party early. We met up with Myke and Brittany at the Thirsty Scholar; a classy spot suggested by Addison, who I met working at the Indy Hostel my first time around. His buddy was playing live piano there. It was a lovely cap to the evening, and early bedtime.

To be honest, I was pooped, over socialized, and memories are all a bit of a blur between overlapping social circles, substances (mostly Prosecco, thanks Davide), heat and dehydration, and frequent naps at the hostel.

Good thing Davide and I are planning on just some low-key camping out (ha!)... on our way to the next rally, Bandcamp (ha ha!).
Posted by 250cc Superhero at 7:46 PM