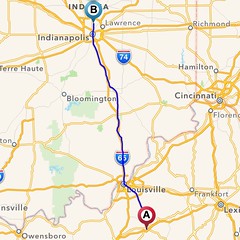 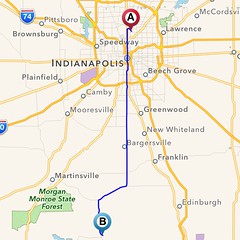 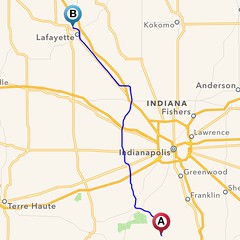 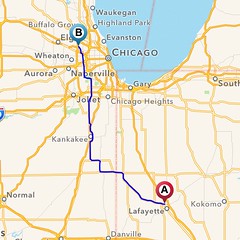 I never would have guessed, but this leg of the journey was all about familiar faces. The days were packed, which was unexpected for the Midwest - wasn't this supposed to be miles and miles of nothing, or something?

Approaching Louisville, KY stirred up that feeling in my gut as I approach any big city after miles of riding - time seems to speed up, and my heart beats double. I suppose that's why I like cities, and I can only presume it would be the same in Louisville. Ethiopian restaurants shared a block with Thai food, and a hip record store and coffee shop bakery on the corner. In fact, Please & Thank You was the shop in question, where I picked up my caffeine and some artisan baked goods for the ride. It's a shame I was merely passing through because I got the sense I would like this city, but I'm starting to feel like most cities are just variations on the same theme. It's a theme I know and love, but perhaps not what I'm riding for anymore.


First order of business was Indianapolis. I heard my friend from Providence, Nick, would be in town visiting family. I couldn't miss the opportunity to catch up with my tech guy (helps keep my NAS running) and good friend. As a former Indianapolisite, he showed me the local haunts before disappearing for dates and further familial obligations.

By Nick's recommendation, I'd stopped at Yats for dinner the previous night but ran out of cash in a cash only place. The man at the counter gave me this receipt, saying, "We just want you to come back." Since I knew I would be leaving the city soon, I returned the next morning to pay my bill and met the owner, Joe, a New Orleans transplant. I ended up chatting for a while, telling them about the Vespa and riding through New Orleans for Ameriespa. By the time we were done, I walked away with buckets of gumbo. My scooter was riding low, but my spirits were high. And delicious. Yats, go there because it's awesome.


Destination: Indiana Bike Week. Guess who's going to be there? Ten points for those who recognize that big top and said the Wall of Death. The same from back in Maggie Valley and some of my favorite people wherever they go.


When you're above watching the show in the Drome, you can feel the walls shake and give with the weight of the bikes whipping around inside, and the roar of engines fill the air. It's like watching an amazing living, breathing monster.

In the center though... It's a visceral, gut punching, eardrum bleeding experience. It's the heart of the storm. It's simultaneously calm and buzzing with barely contained energy. The planks of the wall rise to meet the illuminated big top, and block off all visual connection to the rest of the world. The belly of the beast is insulated, encircled by eager faces peering over the edges. When the bikes start up the sound is incredible, amplified, ricocheting up the boards. The air vibrates, and tastes like metal and 2-stroke smoke. The only world that exists when the door closes is the Wall, the bikes, and the riders, and maybe a lucky passerby who wandered in by their courtesy. I made myself dizzy watching the bikes go round and round, on an endless vertical loop. My heart beat in time with the RPMs.

Later that night, I camped in the Drome. There is nothing in the world like waking up to the wall and big top.

Indiana Bike Week raged on in the bar area, but my heart was still in the Drome. I spent the evening talking to the guys, and Wall E gave me a walk through of some of the bikes. I finally tore myself away long enough to accidentally win 2nd place in a hula hoop contest. I met some great people, but felt a little outside the action. This was the first motorcycle rally I'd attended since Laconia 2011 with my Kawasaki. I don't feel shy about attending bike rallies with a scooter, but perhaps the party wasn't in me that night. I wound my way back to the Drome while disco lights still flashed on trees up the hill, probably to another replay of Cherrie Pie.

The next day was as sunny and hot as the day before. I wanted to stay to help break down (as much as someone who doesn't know what they're doing can help), but eventually I'd need to press on to meet friends in West Lafayette.


My mind wasn't in the ride as I left the Drome that afternoon. Maybe it was lingering moonshine in my bloodstream, but blasting through the fields of Indiana I felt oddly disconnected. It was as if my movements were poorly lip-synced, and the spaces between the moving parts on my scooter were extra slippery. I couldn't shake the sense of how tenuous my connection to the earth was, just two tiny patches of rubber to asphalt, constantly in motion in an endless repeat loop, hurtling forward at 70 miles per hour. Without those two contact points, I felt like I might float away and watch the corn fields shrink to a patchwork below me. It was a disconcerting, thin feeling, leaving the Drome half-unpacked in the dust.

I mean that literally, too. There was a fine layer of white sandy dust on everything. Beanblossom sure is dusty.


On a less surreal note, I was headed for West Lafayette to meet up with former Providence friends. After a much-needed and rejuvenating shower (best decompressing process after riding), they took me on an evening tour of their new home. Steve and Amy/Lady Miss Iris are long-time friends from kungfu and roller derby, and I love how they get involved in their communities wherever they land. They always seem to find something special, a spark, in everything they do. I feel lucky to know people like them, and I have a feeling Providence misses them but Lafayette is enriched with their presence now.

It was also lovely to catch up and listen to them talk about their lives, since we already knew each other and I didn't need to explain about my trip, haha!


We toured Purdue, had some bourbon, and I never caught the ending of Teenage Devil Dolls (1955?) on Roku with them. A perfect, low key evening in the company of good friends.

I had an interesting encounter passing through Wateska, IL the next day. More than once now, gas station owners from India would strike up conversations. Often they'll say it reminds them of back home, but a scoot loaded like mine is uncommon here. We chatted a bit, and when we parted ways he told me, "Have a good journey." It seemed like a nice way to put it.

At least, certainly nicer than the guy who saw my gear and asked what I was riding, and when I pointed out the scoot he responded with, "Oh, it looked like you were riding something serious." I suppose I do approach any arrangement with a certain degree of levity.


The ride north to Chicago was bizarre, I'd never hit wind like that before. My scooter was pointed perfectly straight, yet I had to lean into the wind. It was the front of a mega storm, and I was glad to arrive at Dave (Bronco638) and Kasey's (also a scooter rider!) home in Itasca between the thunderstorms. They filled me with a fantastic slab of steak from the grill and bourbon barrel aged cider, while lightning flashed outside. The Vespa was safely tucked into the garage for the rain and hail. We chatted bikes and life for as long as I could keep my eyes open.


I was due for an oil change and the scoot had a few other minor checks and fixes piled up, so in the morning Dave took me on a supply gathering trip in the truck. Horn button was restored, brakes and rotary checked and bled, oil changed, and he even shined up my headlights and signal lights.

I'm constantly amazed and thankful for the good people I meet along the way.
Posted by 250cc Superhero at 6:37 PM