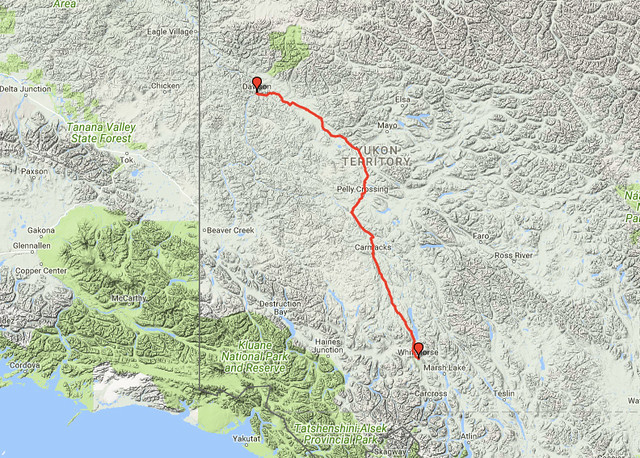 Dawson City is a destination in its own right, though the usual attractions – Klondike gold rush history, gold panning, cabaret, and other old mining town and frontier sales pitches – were not what drew me there. I wanted to ride the Top of the World Highway, which started at the landing point of the George Black Ferry.

But a stop at a historic mining town along the way was swell, too.


Embarking towards Dawson instead of taking the Alaska Highway to Tok meant embracing the unpaved surfaces ahead. I'd left the pavement before for Baja, but it was more a test of patience than technique on my overloaded Vespa. Before setting off, I pored over The Milepost's map for the Klondike Loop, trying to anticipate road conditions. I did this, in spite of knowing I'd only be ready when I found myself there.

Distances between development stretched even farther – the Yukon's test of patience for my Vespa had already begun. I just held the throttle open.


It's on stretches like these that my mind wanders, its latest fixation being to script whole conversations in my head with people I miss. How many hours I wished they could be with me, sharing the sights, smelling the spice of pine in the air, feeling the temperature rise with the sun. I explained myself to no one but the sky and the road, justified my actions to blue mountains on the horizon and an evergreen blur of trees flitting by.


Ahead of me in Haines, a ship waited to take me back to the mainland. I intended to reach it, but hopefully after a heavy dose of glaciers, ghost towns, and wild beauty because I also didn't want to get there. Arrival would set in motion the next series of events, culminating in a return ticket to Boston. Fred was settled there, but I remembered when I first returned to New England and realized it had become just one more destination – no more a home than another stop along the way. High speed internet had petered out since Vancouver, and every choppy FaceTime call was a disjointed reminder of another world. I hadn't seen Boston since last year, a lifetime ago. I wondered if Fred felt like he had a ghost for a girlfriend, my things alongside his, living in Cambridge even when I didn't.

Is home just a place for your stuff, or is it more useful to see it as a state of mind? I once had a vision for it, but it's obscured now, or multiplied, like a kaleidoscope.

Surely I was racking up sleep debt.


Drivers had complained of the frost heaves on the way to Dawson City, but I mostly picked my way around them. Mostly. While lost in made-up conversations in my head, at least one caught me unawares and launched me clean into the air.


It was a bit chilly to camp, but the hotels in a tourist town were expensive for a solo traveler. There were two hostels, one across the river and a new hostel in town. Nancy dissuaded me from the one across the river, so I pulled up to the Cat's Pyjamas.


At the height of the gold rush, Dawson City ballooned to a population of 40,000 – unimaginable, when a brisk walk could find you at the edge of town in less than 15 minutes now. The storefronts and boardwalks looked like a movie set to me, but unfortunately movies and Disney rides were the only things I knew to measure Dawson against.

Let's just say, the Cats Pyjamas made my freshmen dorm look swanky. Though the metal bunks were shored up with planks, mine required some acrobatic prowess to mount since it was missing some reinforcement. I managed to sleep a night without squashing my lower bunkmate.


"Drink it fast or drink it slow, the lips have gotta touch the toe." I'd missed getting Hyderized, but I guess I couldn't escape all the weird northern alcohol traditions.

At the recommendation of previous patrons, I had my Sourtoe Cocktail with Newfoundland Screech Rum. I believe the finer points of the liquor were lost to the spectacle of the little salami-like object plunked in my drink.


As I stared down into the glass, I thought for a moment I saw a little brown chip, like a toenail, that had fallen off and sat at the bottom. It was merely a reflection in the glass, but pointing it out satisfactorily grossed out my new friends.


Five dollars, what a racket! At least the good Captain will give your glass a tap if the toe gets stuck to the bottom.


Ryota was staying in the rustic hostel across the river. In keeping with Yukon authenticity, it skipped such luxuries as electricity and running water. That morning, he spent 3 hours making his own fire to cook breakfast. Guess I'll take the sloped, neglected hostel! Even though the oven looked like it was from the 1970s, and hot oil leaked out and slid across the slanted kitchen floor the last time a guest tried to use it, hey, "At least it's not the 1870s!"

The other couple, because they were two, booked the cheapest hotel room on the other side of town. Ha.


There was some talk that night about the lack of affordable housing for the seasonal workers in town, many from Europe. The next day, hostel staff walked to the free store on the outskirts of Dawson, in search of kitchen basics like a kettle and dish sponges.


I took my turn on the glacially slow ferry across the Yukon, to explore a paddleboat graveyard. 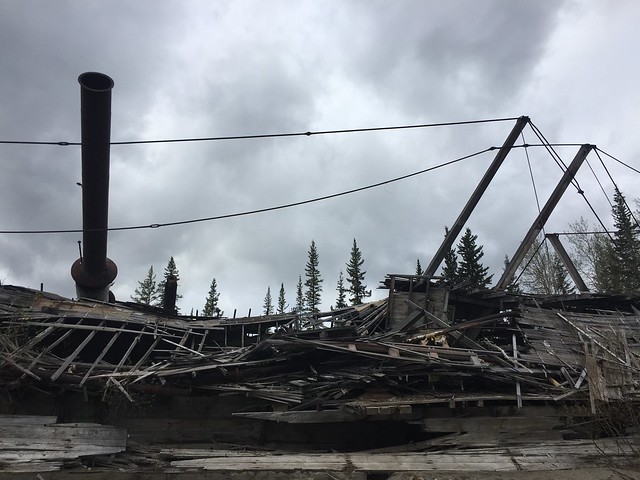 With no railings or guidelines, the paddleboat graveyard was neither safe nor child proof. It was so much fun!

I shared a table with modern surveyors over lunch. Panning for gold in the rivers was for tourists. Their team of geophysicists and small craft pilots analyzed vast swaths of land, providing consulting services for corporations on locations most likely to be rich in minerals of any kind. A fascinating turn in modern mining, but in true nerd form (I recognize my own), they had to stop themselves short of sharing proprietary techniques.

For those of who wonder how I can eat out so often on a budget: you're right, I could stretch my dollar farther by cooking my own dry goods. I do cook sometimes and always carry breakfast, but I very much enjoy eating what's available around me. For me, it's worth the extra expense, and with inflated American portions I seldom eat more than half a meal serving anyway. The other half I wrap in aluminum foil (indispensable on the bike, it also makes a funnel for oil changes), saved for another meal.

Yep, I make it work by hoarding food. My soft cooler instead of a camp kitchen works for me, and I'm okay with eating a lot of food cold. This also hopefully curbs the tendency to balloon up on fattening road foods. I mean, my potato chip intake alone has increased 1000% since embarking north...


I must admit, I was eager to put Dawson City in my rear view mirror. Since all the claims had been made it had the air of a far-flung reenactment camp, capitalizing on tourists and taking advantage of the good nature of European seasonal workers. The frontier was stocked with enough ice cream and dreamcatchers for the busloads, but the real frontier was the search for a dish sponge.

To be fair though, I can't call it a tourist trap – you're never really trapped. The fantastic, raw wildness of the Yukon was always right there, outside town.
Posted by 250cc Superhero at 12:31 PM