As you may have already gathered, Old Blue is up and running again! I want to say thank you again to everyone who chipped in for her rescue, but a few special thanks to:
I daresay Season 2 of Serenity wouldn't be possible without you guys.

Onward to the resurrection!

Mike sent a photo of old blue at his camp in Galbraith. She made it farther north than I did after all, and hung out there until Mike finished his job and hauled her to his home in Anchorage.


On August 8, 2017, through the power of uShip, Serenity arrived at the Ballard home of Tom and Gwynne (and Ollie and Cosbee).


After over 5 months of not seeing my bike, Denver James delivered her to Boston on November 12, 2017.


It was heart-wrenching to take in all the damage up close. This bike was -- is home for me for years now, my one constant through ever changing landscapes. However, a closer look revealed much of the damage to be superficial.

Through the scooter network, Fred had already sourced a donor: a 2007 GTS 250 with ~4k on the odometer. Winter lay before us, and I had little else to do (read: under-unemployed). I studied Robot's videos on how to remove an engine, and his GTS overhaul part 1, part 2, part 3. Below are my notes from the process.


- Inspected temp sensor before realizing it's the wrong one.


Dec 6, 2017
- Polished the fuck out of the headlight with NOVUS 3-step kit, thanks Shannon!
- Continued tearing apart donor. Gas drained, floorboard out, seat off, rear rack off.
- Found correct temp sensor and set aside.
- Set aside intact left side trim.
- Prepped headset pieces for paint.

Dec 13, 2017
- Removed floorboard. Hammered out dents on right side of legshield and replaced trim.
- Removed footpegs and internal pieces of crash bars.

- Replacement engine lined up for connection. 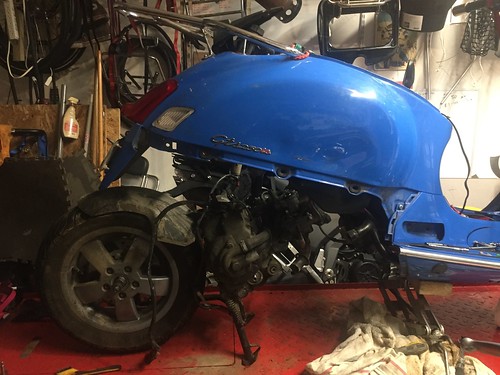 - Dropped fuel tank, waiting on dollies to bump out dent on right cowl.


Feb 16, 2018
- Banged out right side dent slightly.
- Inspected tear near footpegs. They are symmetrical and backed by subframe, decided not to weld.
- Replaced fuel tank and lines. Mudguard and taillight back in place.
- Replacement engine bolted in. Reconnected everything but intake manifold, coolant, and large hoses (out of hose clamps).
- Rear brake caliper in place, but it's grabbing. Will adjust tomorrow.

April 11, 2018
- Plastic parts are in from the painter! Plus extra blue paint for touch up.

April 13, 2018
- Swapped buttons over from old headset. Starter button is a bit broken. 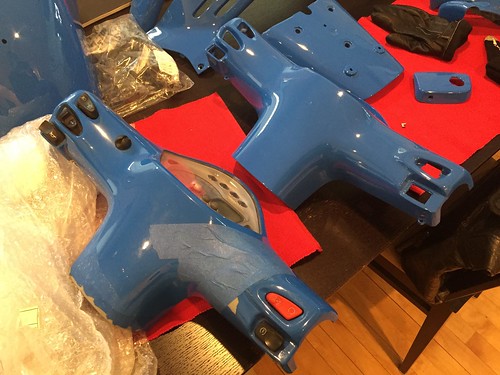 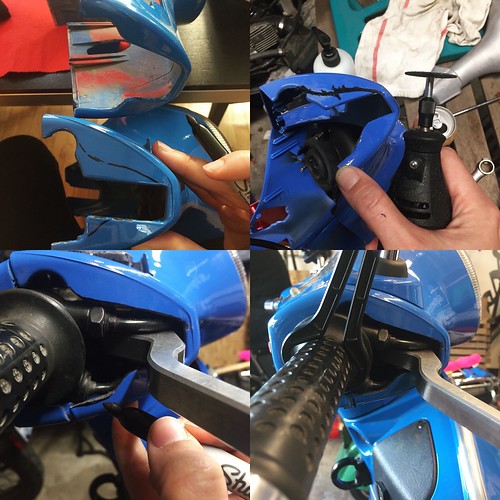 - Still waiting for new starter button, so it's dangling, but we're nearly there.
- Front rack back on. 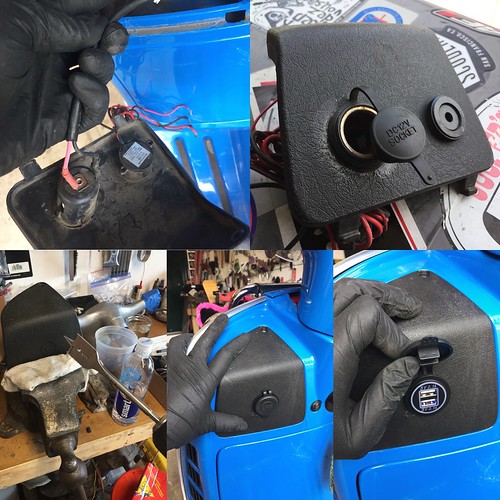 And that's about it for now!


She survived her run to the Poconos for Whiskey Dick 7 (after a new belt), alongside Fred's black GTS! This was great news, because we had plans for the summer...