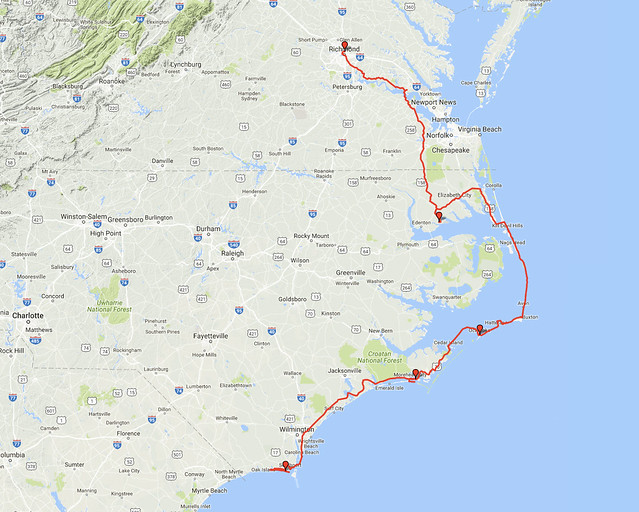 When picking routes, often I start by opening a map and looking for nearby geographical features or land masses, especially new ones. North Carolina's map revealed a series of long, narrow islands flung far to the east of the main body of land. I would discover later they're called the Outer Banks, a string of barrier islands and peninsulas connected by ferries, promising a very different view of the state than the mountainous Blue Ridge Parkway.


After the accident, I was feeling pretty down. I was in quite a bit of physical pain, and had legal followup to take care of. My freshly assembled PX lovechild was fucked, and along with it my spring riding plans (Furthest Ridden at Dogwood Classic 13 was going to be mine! At least I got to ride an epic 283 miles CORSette with Fred). What is life without a bike? Going from being highly independent and mobile to being beholden to the schedules of other people, buses, and trains was not to my taste. After some court dallying back in Atlanta, I flew to Boston to burrow myself at Fred's for the indefinite future. I had paying work to take care of anyway.

I resigned myself to just getting used to feeling a bit lost and numb, when I got an email from Danni. She was asking if I would join the team for another Gudetama activation, San Diego Comic Con this time. A spark flickered. How will I arrange it? Can I get Serenity there? I texted my go-to folks in SF, Pete and Moose, to bounce some ideas around and responded shortly after. The spark had caught. Yes, sign me up!

When I broke the news to Fred, he mentioned he would be in Vegas for a convention around the same time. "I usually have a whole room to myself, want to join me?" Double yes!

The last piece of the puzzle was the BGL agency retreat, which would be held in Burlington, VT this year. A scant 219 miles from Fred's, I had intended to arrive by bike. A quick check on the calendar confirmed that I could fly back to Boston in time to ride for the retreat. By then, the Rally 200 might be assembled, or the PX would be repaired...

The fire was back. July and August will be ablaze again for me. Here's where you might find me:

**August 6th, Fred and I catch the redeye to Boston**

I have a November book deadline that may keep me from extended overland travel for a while (plus, I need time to cook up new plans), but you know I'd never be able to leave Serenity alone for long.

Email ThisBlogThis!Share to TwitterShare to FacebookShare to Pinterest
Labels: planningnplotting


Rally time! I landed in Richmond International Airport, full of nervous anticipation to see people, the rally, and my bike again. Fred surprised me at my gate, having landed just half an hour before me. It was all I could do not to jump on him, but with all my luggage hanging off my shoulders I thought perhaps I should spare him the additional inertia.

I don't remember if we caught an Uber to my bike for pickup, but in a blink Fred and I had gear in hand and my old familiar bike was under me again. We hit the road 2-up to the rally kickoff at Seven Hills Brewing Company.