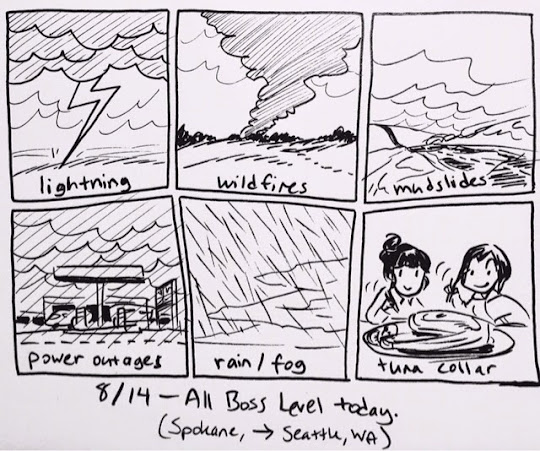 The finale to the epic scooter ride through eastern Washington rose to a crescendo with Steven's Pass. If hitting the pea-soup-thick fog made a sound effect, it would be, "PHOOWF." The fog could have lasted a minute or forever, there was no way to tell. Just an unending silvery white, an Apple store's dream. For a second you think the ground has dropped away, but actually it's because you've cleared the summit and have descended out of the clouds on the other side ("WHOOMF"). And it's beautiful. The trees are different - greener, more lush. The air smells like a good gin. It felt like I'd just beat a boss level, saved the forest, and now pixelated little forest animals were going to come party with me.

Or y'know, my childhood friend, Gwynne, would be waiting for me with izakaya intentions.

I have to admit, the tuna collar defeated me. I forget how big those fish are. There might still be leftovers in the fridge. It's not over yet...
Posted by 250cc Superhero at 6:00 PM