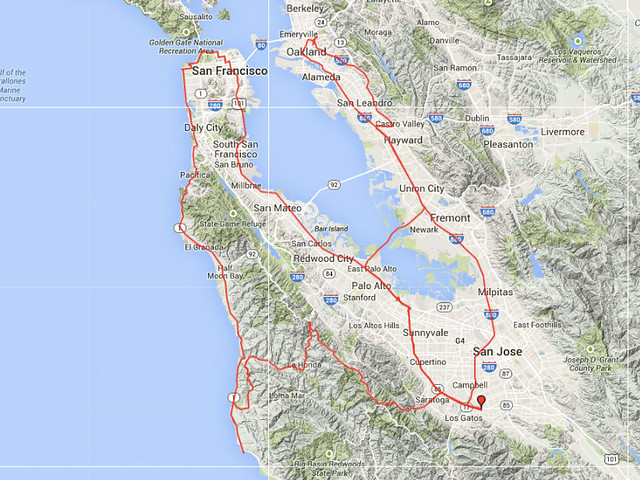 Just to clear up any confusion: Fear not! This is not the end of my trip. The Bay Area is a convenient place to pause to finish leftover illustration work for a chapter book (ah, remember that?) and maybe rest up a bit. Much of my extended family on both sides calls the Bay Area home, and I have disjointed childhood memories of shivering at Fisherman's Wharf and driving through the dry hills of Fremont. Actually, most of my memories of the Bay are of being ferried around in family cars, often heading to or coming from Costco.

I'm pretty sure there's more to the Bay than Costco, so let's check it out.

Since I was planning to stay for a while with my cousin, Kevin, I talked him into signing up at a rock climbing gym with me. One of the things I'd missed the most on the road was a regular gym. Riding had replaced my usual participation in martial arts (this is the longest I've gone without a school). Now that I'm not planning on riding as much, I thought I would seek out the punchy-kicky again...or perhaps, inspired by all the cool climbers I met on the road, try an indoor rock gym.


Aside from family in the Bay Area, I discovered some friends were already here! On Facebook, I reconnected with Peter, a middle school classmate from years ago in Beijing. He had been posting photos of his bike rides, so we got together for Hawaiian poke and motorcycle nerding out.

Some of my favorite people, Lisa and Erik, had settled in Oakland after two years spent living and working from around the world. I found Lisa through her blog, and met them both when they were passing through Boston last year. We headed into the city for a cat-themed evening at the California Academy of Sciences. Ahhh, city life.


If you ask me, a good haircut is worth splurging on. Say what you will about 'roughing it' when riding across the country, a well-executed haircut goes miles (literally, plus at least a couple months) for feeling like a civilized human being, even with minimal maintenance. Lisa kindly suggested her stylist, KC, and at Manifesta the magic happened. Nice detail I haven't seen before: they lend you a t-shirt so that your own doesn't get itchy.


Someone asked me once if there was any food I craved on the road. I'm pretty happy to eat whatever is cheap, convenient, and not terrible for me (that last part fluctuates with hunger, cold, and tiredness). In general, my food path saw a steady evolution from biscuits and BBQ, to burgers and breakfast burritos. I don't recall any specific cravings, but by the time I reached the Pacific I was ready for something edible from the ocean, and food varieties that I believe the middle may describe as 'ethnic'. Breakfast burritos, while delicious, do not qualify. Thankfully, like many big cities with long immigrant histories, San Francisco's got that covered.

Early on, I had an appointment with Vespa SF to see about that front end wobble. We decided to replace the front tire and switch to Power Pures, which seems to have helped plenty. While there, Pete invited me along to their monthly group ride. At the meet he called out my Vespa from RI, and I felt a bit like a rock star the rest of the ride. We paused for a meal at Half Moon Bay, but I barely ate for all the excited story sharing. It was great fun getting to know other riders, and to hit some of the coast with a bunch of Vespas. The clouds threatened in the afternoon, but never delivered. Our modern, urbane bunch buzzed its way south as far as Pigeon Point before turning towards Skyline Drive, where I parted ways. Hopefully I'll catch them again another month!


So I did some climbing, working, friending, and general life maintenance. After the second round of sketches were sent in, it didn't take long to get antsy. Fortunately, I found a perfect excuse for a 'little' 2,000 mile Vegas and Grand Canyon loop while I waited on revision notes. Stay tuned.
Posted by 250cc Superhero at 6:18 PM