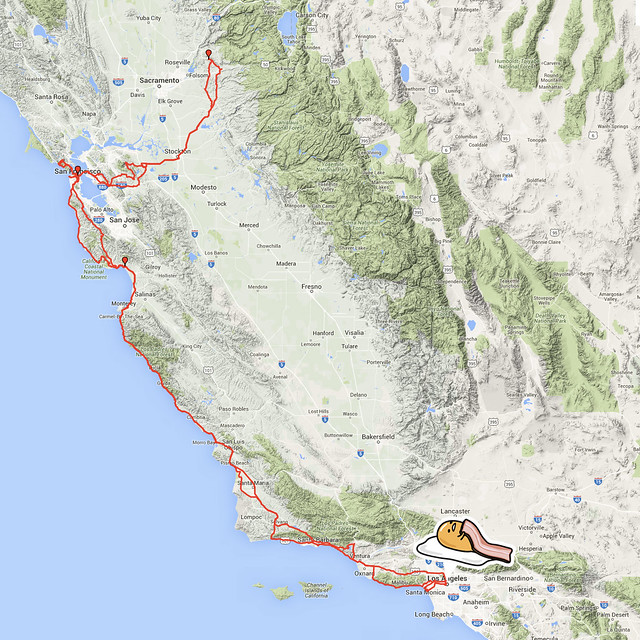 If the DR-Z has a reputation for being a hooligan bike, the 300 Super is pinkies-out civilized. Smooth, quiet, even power delivery, with plenty of room for passenger and luggage. I wouldn't even know if it's on if I wasn't flying down the highway at 70mph. They're like apples and oranges, but still the best bookends for a flight.

I'd be getting to know the 2015 Super a lot in the coming month. Pete was loaning me his new baby (fresh from its first service) for my journey to LA, for a job riding...more 300 Supers.

I still haven't found the will in me to do the SF-LA run in a single day. Why would I, when I could take an extra day to visit people like Jim? We chatted about his new motorcycle of desire, which I believe it the BMW R nineT (?) – Tai Li and I were both more about the Duke 390.

In the morning, I realized why the dogs seemed extra excited as I bustled around packing: they had found and finished my remaining Polish deli treats from Pittsburgh. Easy way to make friends!


I arrived in at my family friend's Los Angeles home just before dusk. She was away in Italy, but had kindly allowed me and my Boomchikapop Vespa colleague, Tigra, to house and cat sit. Waiting for the house key to be dropped off and Tigra to arrive, I picked up some groceries, tamales for dinner, and sat on the steps watching the sun set from the hilltop home. The sky turned brilliant behind silhouettes of palm trees, and I thought, Maybe I'm ready to be back in LA.

In any case I'd be here for the next two weekends, working with Aisha and Tigra again in a team of six riders. This time, we're introducing Gudetama from Sanrio, at Anime Expo (think Hello Kitty, but weirder, eggier).

Like Boomchikapop, the job is to be highly visible living billboards, riding circles around the convention center surrounding the event, answering questions, handing out giveaways, or being filmed for...whatever purposes Sanrio has. The hours are long, often in high congestion, questionable air pollutant count, and with the July sun above reflected back up by the concrete below. And yet, even after a 12 hour shift riding the Gudetama bike, I'm still quite pleased to hop on Pete's Vespa for the commute to my temporary home.


Bonus that the non-event day ride routes followed densely touristed places – many of the 'LA must see sights' that I usually skip, we blanketed them on the Gudetama bikes. Probably the best way for me to check those off my list.


Days disappeared under the blazing sun, boiling my brain and melting the hours together like a Dali. We'd open the windows to my friend's home in the evenings, and play with the cats inside or have dinner outside. Tigra took some of her days off for a car trip, so I indulged in the non-vegan food scene.

Working within the team became my daily routine and my note taking became spotty, so looking back it's especially a blur. My Gude-family was fun, but in time it felt like I couldn't escape crowds, cars, strip malls, sprawl, or aggressively self-made men and women and plans to 'make it.' The sun seemed to release a reek of snake oil from between the cracks in the pavement, probably 100% vegan (I suppose promises don't have to be made of animal suffering, just human). Perhaps I'm becoming too numb to experience travel. On days off, I'd hide in the shade of coffee hops to blog or draw, but Lubec called in the back of my mind, and I swear the price of kombucha was rising by the minute.

Back in New Orleans, I had a chance to tour the set for the new Terminator movie with stunt coordinator, Hank. It seemed appropriate to spend my last day off to watch the film at vintage movie theater, The Vista. It struck me what incredible effort and coordination it is to bring to life a film. So many people have to share a delusion for months, years, to create 126 minutes of entertainment for you, the viewer. I can't decide whether it's magical or insane, or whether it makes a difference as long as it's a sufficient balm for the drudgery of everyday existence.

...The insular LA concrete is getting to me, it's high time to go!

Hollywood hustle fell away to calm coastal and mountain riding, while still acknowledging the magic of shared delusion that puts this city on the map. Leave to John to show me a completely different side of what it means to call LA home, further proof one should really just stick to following locals (or those who know) around. An urban sprawl like LA seems especially apt for chameleon qualities, hugely dependent on who shows you their experience of it. I like John's version, it was fun sharing the road with the Norge again.


396 miles later in Santa Cruz, Quin Lin had told me about some crazy treehouse off of a hiking trail. The rumor is that some college kid started it, it doesn't have a ladder, you just have to climb up the right-angle limbs of a redwood.


I would have sworn I was seven stories up in the treehouse, but Jim tells me he puts it at just below three. When you're half way up with no idea what to expect at the top, it seems much higher. The first few step-through loops to climb up to the lower limbs were the hardest, but they weren't the reason I had to stop for a break. After all, I'm a competent climber...indoor rock climber. With a harness, safety line, padding, and plenty of people around with cell phone service to call an ambulance if needed.

No, the curse of adulthood is the wisdom/idiocy to look down, gauge how high up you are, how many branches between you and the ground, and imagine how many bones it would break and how difficult it would be to continue to ride to Lubec in a full body cast. The strength went right out of my legs, a wobbly quality great in custard desserts and not great for my present situation. I guess I just won't fall then, I told myself after a deep breathing exercise. This was only about a third of the way up, Jim was still shouting encouragement from just below my feet.

At the top I'm recovering and patting myself on the back for completing the mission, when this kid, Peter, shows up all young confidence.

In San Francisco again, Pete and Verna are amping up for a launch party for his new SF scooter club, the Post Mods. I followed Pete, stapling flyers to parked Vespas around town, but my thoughts wandered.

In contrast to my usual ultra-flexible comings and goings, I'd finalized a route plan to reach the easternmost point in the contiguous US states. This was in part because I had to pick a date for my return flight to Pittsburgh. The other part was I wanted to celebrate reaching my goal by staying at a proper Bed and Breakfast, which required making a reservation far in advance for a fixed date.

This was it. The final approach to Lubec was laid out before me, just over a week away. For the days leading up to the July 23, I knew exactly where I should be, how many miles I needed cover each day, which day to rest, and where I would be staying each night.

It should have been a comfort, but I felt anxious and unsettled.

At least there was one more California ride to plan.

So Tigra, Boomchikapop and Gudetama colleague, also works as a river guide in Coloma, CA. She invited us to stay with her at her camp and go for a private tour, so scooterists are taking to the river!


Because it's just Tigra, us, and a PCT hiker going by Daytripper, we could pull up anywhere we want. We feasted on wild blackberries as we went, and explored a little island. I think everyone fell out of the raft at least once, except Pete who deliberately jumped out for a swim (brr). The weather cooperated beautifully and nobody died, I call it a success!


There's still a party to throw, so after the rapids in the morning we hustled back in the afternoon – another nighttime arrival for the Banhmi Bandits, and one night to sleep and treat sunburnt knees and bruises. I bombed my immune system a shot of Emergen-C, echinacea, antihistamine and ibuprofen, then commenced scrambling to gather the last few things for the Post Mods launch party.

I'm antsy to go back east for my last corner, but it's always bittersweet leaving. Of all the places I've visited, I spent the most time in the Bay – long enough to form friendships, have familiar hangouts, fall in love. Even if I've stopped shopping for homes, in small ways I've found many anyway, all across the United States.