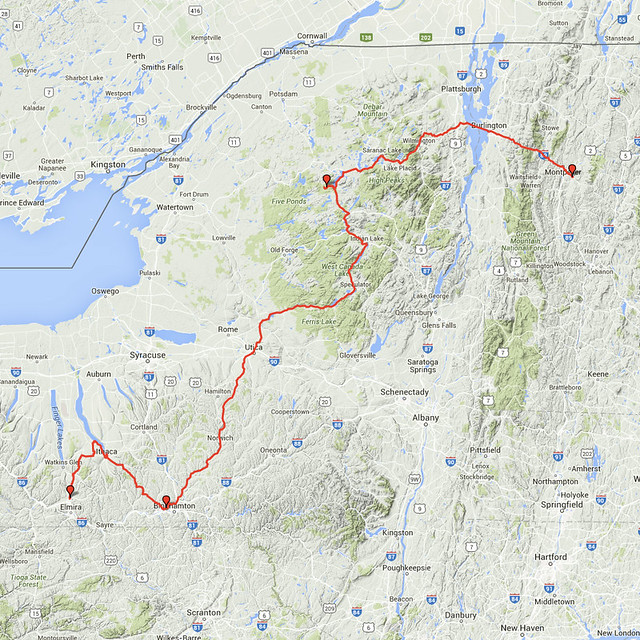 One of the silliest hobbies for a live-onboard scooterist must be rock collecting. However, I quickly regretted leaving my massage rock on Tim's dresser, as the pain in my shoulders showed no signs of responding to anything but the firm hand of Vitamin I. Oh well, I have scooterists to meet!

Bernadette, fellow artist and Vespa rider, had reached out to me from her home in Binghamton, NY long ago when I first set off. Unfortunately, my route immediately took me south and away from NY state, but now over a year later, I finally got to pass through her neck of woods. We picked Ithaca Scooter & Cycles to meet (I could use some parts too). The vintage scooter community in the northeast is small and I poked around the garage with the owner, Anthony, reminiscing about rallies past until Bernadette and her scootering companion, Jim, arrived.

The skies drizzled but we had falls to see! Ithaca is gorges, as they say. With endless options for stops to gaze at natural beauty, Jim and Bernadette huddled to discuss options. We eventually settled on a slightly shorter, relaxed route – score another point for slow travel.

After all this time, there's still nothing as utterly pleasing as tearing around town in a little pack of scooters.


The shorter route gave us time to drop by the Blind Tiger Pub and meet other local scooterists. With the itinerant drizzle, I was happy to let the afternoon expand in a pleasant blur of new people and ride talk at this homey bar. However, the evening was still young, and Bernadette had a special meal planned back at her home: spiedies!


Jim joined us for dinner, and we wholeheartedly embraced the custom of eating, drinking, and sharing life stories into the night. I peered at Bernadette's watercolor paintings with some envy –  I would be fine if publishers never asked me for watercolor work, it's not a medium that inspires confidence in me. Bernadette has a subtle, trained eye, and plenty of travel stories of her own, as well as aspirations for extended scootering. Jim eventually retired, but we chatted on easily, the way you may imagine between two kindred spirits just meeting. My head was swimming with falls, scooterists, marinated meat, watercolors and wine before I admitted defeat to tiredness. From the safety of her tasteful studio/guest room, I couldn't help feeling like I wouldn't mind if I found myself something like her someday.

Bernadette also keeps a blog for art and travel, and has an entry about my visit. Thanks so much for sharing your fantastic slice of life with me, Bernadette!


Riding up through Utica and into the Adirondacks, the air itself seemed to start smelling familiar. I've been through this land, I thought, though much earlier in my long distance riding career. After so many miles of constantly pushing boundaries, this was the beginning of finding myself in territory I was already familiar with.


Amidst my fuzzy green nostalgic reverie, I had another scooterist-blogger to meet!

Months ago, Jim Mandle and David Masse had reached out with a plan to set up a meeting of like-minded scooterists in the northeast. A lazy egg and other happy life circumstances intervened, so Jim and David met for a run around the Adirondacks on their own (see David's post here!) until I found myself in the region. We all have roughly the same class of Vespa, but compared to their daily mileage I seem to just crawl along.

Anyhow, in spite of a minor coolant event, David had ridden down from Montreal and was waiting for me at the Adirondack Museum.


Jim has a long history with the Adirondacks, so David roughly followed his lead in the role of 'local' guide. After pitching tents at a free primitive campground, we scooted unburdened to Jim's favorite spot in the park: a small tucked-away piece of land with a peaceful view of small falls. I carried a meal of cured meats from a Polish deli in Utica, cucumbers from Tim's family garden, leftover cheese from Bernadette, along with my usual cheese stock. From a perch on Jim's spot, David and I passed a tiny Swiss army knife between us to slice off bites, sharing a meal with someone we'd each only met a few hours ago.

I was suddenly taken up in a wonderful feeling of convergence. Somehow, the inexplicable forces in the world seemed to have come together to put me in this exact time and place. It was almost as if I was sharing a meal with everyone who contributed in some way – Tim, Bernadette, Jim, even Matt who reminded me that Polish delis are awesome places to stop for snacks – and the meal with David was more delicious because of it. A past-self, a faraway person now, had struggled with acute bouts of loneliness and self-doubt setting out. Over time and distance, perhaps as more these moments revealed themselves, I found I rarely felt lonely anymore. I have come so far, I can't be grateful enough for this charmed life, I reflected, munching away. It's a beautiful feeling.

So beautiful, it almost made me forget about the clouds of hungry biting insects intent on joining our dinner. David and I, both full disclosure urbanites, had forgotten to purchase bug repellent before our camp outing. It's also why I only had the tiniest Swiss army knife. After all this time, some things don't change.

Anyway, we feasted to the backdrop of falling water and accomplishment between insect swatting, then scooted back to Mosquito Junction (as dubbed by David) to chat through the mesh of our respective tents. Being the brave outdoorsy person I'm not, I filled an empty water bottle with some whiskey Jack had given me, unzipped the mesh, and rolled it over to David's tent for pickup before quickly zipping the tent closed again. Thanks, Jack, for a little non-insectoid buzz at the convergence party.

Honestly though, this is the kind of magic that keeps me going.


Over breakfast in Tupper Lake, David revealed to me this was only his second time scooter camping! I feel a bit guilty, like I tossed him in the deep end.


Lake Placid is one of the larger villages in the Adirondacks, with a history hosting winter Olympics. We passed time with a snack and a chat with other motorcyclists who'd spotted us at breakfast, but there's nothing like full-time riding to make a rider check radar maps like a hypochondriac checks for lumps.

Sure enough, I'd noticed an angry orange blob on radar moving directly across our intended route, but it appeared to be passing. My waterproofs had become less-than-waterproof over time, so when the drops started to fall I pulled over to tell David to put on his proper working rain gear and catch up to me at the next place I could find something resembling cover.

My pants soaked up some rain and made for a chilly seat, but thankfully the squall was short and fierce and the worst passed while I was huddled under my tarp/groundcover. David reported staying nice and dry though, and seemed thoroughly impressed with my godlike weather prediction skill. Amateur meteorology: bonus hobby for people who learn to ride in New England (though let's be honest, you pack all the layers anyway).

I felt very dramatic waving goodbye to David as the ferry for Burlington pulled away, and even got a bit teary-eyed. We'd only just met and barely spent a couple days together, but there is something to be said for those you share the road with.

You can read his accounts of our scootings on his blog in four parts, starting here, now part 2, the penultimate, and the finale. I enjoyed seeing his perspective on our shared miles! He did an interview of me a little later down the road, too.


I was back in Vermont! Burlington is a cozy college town, where you'd see a man with a delicately curled mustache playing guitar while coasting down the street on a skateboard. I might have stared a bit, because it was a pleasant but sudden change from the rustic charm of the Adirondacks. I actually encountered other motorcyclists there too. The fully luggaged F650GS rider who stared, mouth agape, as he passed my comparatively piecemeal loaded scooter at the stop light stands out in my memory. I raised my water bottle in salute.

There are still adventures to be had, but that night I relished a burrito from the local place and rested in the privacy of a quaint, quiet room.

Sometimes, you rush. Sometimes you sit back and let things unfold. After this rest, I was pushing for the easternmost point in the contiguous US: Lubec, ME. I felt if I didn't push now, I'd never reach it due to distraction. After so many miles, I'd come to realize (to my joy) I could circle the continent endlessly finding new things, meeting fascinating people, being pulled around by jobs, attending rallies, and following twisty roads. But for months now, I'd been feeling too full of experiences, and time expands oddly to fill the road. I'd finally arranged it so something of a final destination was in sight. I chased the end and feared it in equal parts, for the bittersweetness of completion that's necessary to proceed to the next thing, and the anxiety for whatever that may be. The knot of the unknown sat painfully and unrelentingly between my shoulder blades. Something had to be done.

After Lubec, I'll have officially exploded the last semblance of framework in my life.