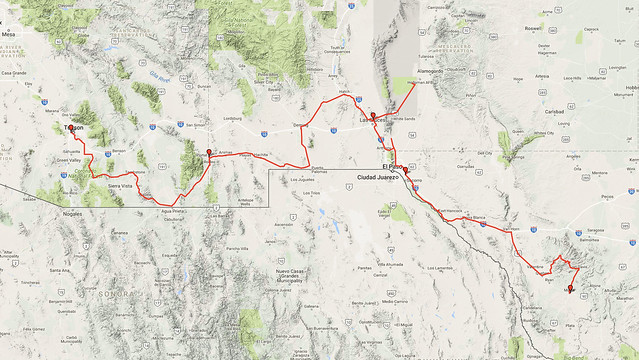 
A full day on the GL is somewhere between harder and much harder than on my GTS, and we hadn't had a non-riding rest day yet. By the time we pitched camp I saw in Fred that mix of high-strung delirium and fatigue that happens after hours of guiding an exposed vehicle down the road – a mirror of my own state, but amplified. Our schedule was pulling us ahead, but we needed to decompress on our only night in Marfa.

In the longstanding tradition of gathering around a campfire with drinks, we made friends. Most of the other patrons were RVers, and our Vespa expedition generated curiosity.

"You're riding to Vegas?"

"I want to hear your version of our lives, it's going to be way more interesting that what I have to say."

That particular circle around the campfire was eclectic, and included a photographer who recently broke up, bought an RV, packed up her life in LA, and took off. We called it a night before we could take a tour of her RV, but took her up on it in the morning.


I guess I'm just not the romancing type, it hadn't even occurred to me that people might interpret our trip to Vegas as a crazy wedding scheme. It almost made me want to stage some fake photos outside a chapel once we arrived... almost. Maybe the scooters can get married. Is that legal in Nevada?

Marfa is surprising for being a slice of cosmopolitan lifestyle dropped in the middle of nowhere. It seemed like everyone, regardless where they're from, walked slightly off the beaten path and walked it with a sophistication more typical to a large city, not a dusty town. Here, a beat up old RV is beat up in just the right way, and the residents are probably brewing kombucha in there, or at the very least are part-vegan. And yet, the harsh landscape demands some level of hardiness and determination that would keep away those who don't dare break out.

I mean, Marfa, a town of less than 2,000 in the middle of Texas, was anticipating the opening of a slick new Vietnamese restaurant called Marpho. In case you're uncertain where I stand on this issue, I would eat there.

I hope to pass through Marfa again someday. If not for pho, then to look for the Marfa lights, which we skipped due to the GL's malfunctioning headlight and being tired.

This was perhaps the hardest day. Once we picked up TX 90 it was flat and straight, and Fred would only hold it open around 50mph for fear of blowing up his engine. We zipped by the Prada art installation with tunnel vision, and I saw Fred's head whip around but we didn't stop. Rough feelings simmered as we waited for road construction, but it was superficial and smoothed out with a hug at the next rest stop. The day was not done though, and we'd spend the next several hours turning around, chasing threads of a frontage road for I-10. When we finally hit the Rio Grande again, we combed the edges of industrial scale farmland for miles before hitting the sprawl of El Paso/Cuidad Juarez. Our plan get to Las Cruces for the night were extinguished with the sun, and subsequent drop in temperature. The reacquaintance to moisture in the air from the river seemed to make the cold more piercing, and Fred made the call: He found the nearest hotel.


I suppose I'll always take it as a bit of defeat, that I couldn't plan or otherwise procure accommodations before resorting to hotel costs, but it was clear Fred hit the point of no-longer-having-fun. Even if I would have pushed myself or planned to take longer, I must admit the hot shower, privacy, and large bed to ourselves was hugely restorative.

While El Paso was somewhat concentrated, the twinkling orange lights of Juarez stretched out in a massive blanket that hugged the land. In my mind's eye I saw the entire city grid laid out with stop signs, a surging concrete maze. I taunted Fred with the option of crossing the border just to do it, maybe get breakfast in Mexico (he said no, after looking up crime rates and recalling Voni's story about why their hotel had fresh lobster in stock. Hint: Cartel).


In the morning, Fred looked at the bed longingly as we packed our gear onto the bellhop. He didn't have to say anything, it was written on his face, Can't we just stay for a bit longer. Ah, how many soft sleeping surfaces I've given that look. But we have a rally to get to.


As a small consolation, we called it an early day and checked into Las Cruces. With luggage dropped off and the GL parked at the Super 8, we both hopped on my GTS for one place I didn't want to miss: White Sands National Monument. I hit wide open throttle as we made the long, slow climb up the Organ Mountains and accelerated to 70mph on the other side, rushing to make it to the park before closing. Admittedly, after doing 50mph for most of Texas it was exhilarating to open up my bike, even 2-up. We squeaked in just as the gates closed for sunset, and the rangers gave us an hour to wander.


On the other side of the mountains, I pointed out the campground where I'd stayed last time I was here. It was covered in snow. We gladly scooted back to our warm room indoors at Super 8.

Fred said he was glad for the GTS because the GL would have died on that climb, but I think if you had more time it wouldn't matter...

In our effort to stay off I-10 we took TX 9, the most remote road we'd ridden so far. I drank deep the peaceful spaciousness of the desert, completely oblivious that Fred was riding nervous beside me. He told me later he was going over in his head what he would do if the bike broke down. A few breezeblock shacks and border patrol cars were the only signs of human life for miles. The desert scrub could have looked like this 100 years ago. Judging from the man with only one tooth at the lone gas pump in Animas, maybe dental care was just as dated. The pump closed 5 minutes after we filled up.

Bisbee and Tombstone were along the route, but neither of us were feeling like the Disney Wild West and our needs for civilization were topped up before long.

Moreover, I'd started to notice a disturbing trend in interactions with strangers. As a solo curiosity, there was only one option for questions. As a duo, Fred would always be the one addressed. Naturally, the vintage Vespa with a comically oversized pack stands out, and I certainly don't need to always be the center of attention. But I began to also suspect something else...

In traveling with a male counterpart, it's presumed I'm following along. Fred does a marvelous job of giving both our backstories and is not a man prone to ego, but I still don't know if he noticed the subtle, unspoken assumption of authority. Overwhelmingly, I've ridden more miles solo than with companions of any gender, but as those small moments stacked up I realized: the day I choose to ride with a boyfriend, in the eyes of the average person I'd be assigned the role of accessory. The bitter reality is my individual journey would be undermined, unless I worked extra hard to be heard. The motorcycling world puts solo female riders on a pedestal, but in a stunning display of hypocrisy forgets that same woman was noteworthy the moment she's chosen a partner for the road. Like riding solo is the only way to be a real woman rider. I'd think it's more remarkable to have found another person who's willing to take the road alongside you, but hey maybe they all just have sour grapes.

I hadn't needed to deal with those assumptions on a regular basis until riding with Fred, and admittedly I felt a hint of resentment. Of all the potential challenges I'd worried about facing together, I'd imagined scenarios like losing tempers when hungry or tired, arguing over which way to go, or becoming frustrated at the unique limitations of our bikes. I hadn't anticipated the predicament of becoming invisible, nor that it would sting so frequently. If I'd like to travel more with a significant other, I'm going to need to develop tools to handle myself and others in such situations, without too much cursing. Maybe I'll go with the cursing for now – Hey, this was my fucking idea too!

This is by no means to say it spoiled travel together. For now, it was actually a relief to let Fred be the magnet for inquisitive strangers. I'm many thousand of miles past that heady elation that consumes you when first escaping daily doldrum for the open road, but in him I saw that kind of NRE – New Road Energy. Where I may have given a more deadpan response depending on whether I'd had a snack before being accosted with, "Do you need a license for that?" (for the millionth time), Fred was always animated, and it was refreshing to see him share the excitement.

Laundry and miles had piled up, and we were overdue for a rest by Tucson, AZ. We booked two nights at the hostel, eschewing the world-at-your-service rates to mingle among the weirdos, crazies, unsocialized, or merely free-spirited (and boy did that hostel deliver). We also needed to find an urgent care clinic, to determine whether Fred's sore throat was strep. Dammit, riding hard is hard!


Thankfully, Fred's throat threat was downgraded to merely tonsillitis, probably exacerbated by the dry climate. After a Trader Joe's picnic lunch at the hostel, re-knitting our paracord bracelets that had been used to line dry our laundry, we watched Deadpool in the type of theater that brings food and drink to you in your big cushy recliner. And then had Sonoran dogs. And then had donuts and whiskey for dessert.

I think it was at Good Oak the day before, tucked into the polished and tastefully lit heart of the restaurant, Fred mentioned, "On this street, in this restaurant, you could be in any city." It did seem ironic to ride so far, merely to immerse yourself in an environment not dissimilar to Boston. I suppose for myself though, this one rest day in Tucson was a wistful taste of the other side, of 'normal life'. Would this be what it's like to spend a Sunday with Fred, if I settled back into working weekdays in a fixed location? If life is like a pendulum, was mine swinging back towards dormancy? I still hadn't decided what I was doing after the rally.


Cleared of strep, clothes afresh, we had one more overnight till Vegas.
Posted by 250cc Superhero at 11:23 AM