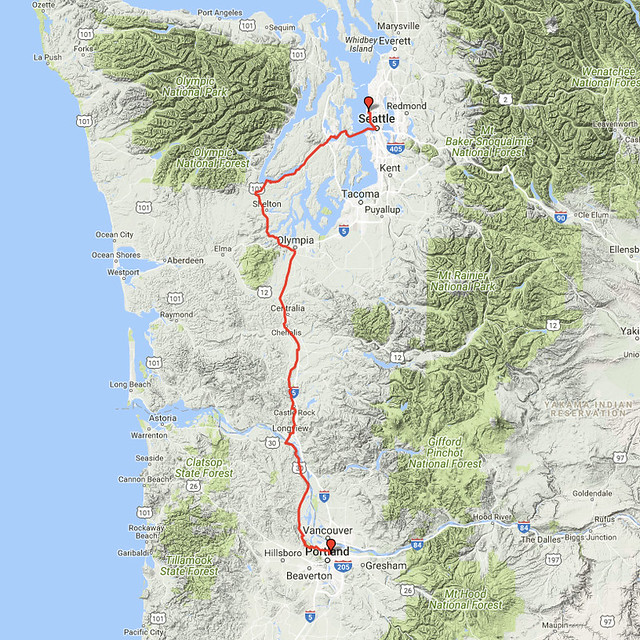 It's a straightforward ride along I-5 from Portland to Seattle, but I'd find a way to dress it up. I hustled out the door early to give myself plenty of time to meander and catch the Bremerton ferry.


The skies were clear and after so much cold and dampness, the day was gloriously warm. At Union, WA the road narrowed and hugged the shore of an inland body of water. Between the trees, the homes facing the bay were all beautiful, unique, lavishly maintained, and festooned with sports cars and boats. All of them had a dazzling view of the Olympics directly across the water. It was a pleasure to ride through, even though my presence was probably bringing down the property value.

I arrived with twenty minutes to spare in Bremerton, a town so wholesome and agreeable that I was at a loss for what to do but treat myself to a celebratory soy latte. I mean hey, I'm in Washington.

Around a green bend, the Seattle skyline appeared with Mt. Hood rising behind it. At the front of the ferry, a photographer had set up next to my bike to capture it. A few others stood around simply admiring the view. I was reveling in nostalgia to once again be approaching Seattle by scoot and ferry, when a father struck up conversation.

"Going cross country?" he nodded towards the loaded bike.

"Where did you start?"

"That’s a long way! You camp along the way? When did you leave?"

"I left 3 years ago as of tomorrow. This is my second time through Seattle, and I’m headed to Alaska next." About now was when his face turned from friendly awe to Oh shit I’ve started a conversation with a crazy person. I changed the subject, "Are you from Seattle?"

"Oh... No, we’re just going into town for the Mariners game," he said, almost weakly. "Well... Safe travels." Then he shuffled his son back towards the safety of their car.

Gwynne already had a place in mind for our first Seattle meal: a new cha chaan teng in the International District, A+ Hong Kong Kitchen (name sounds authentic!). They had all the classics, like curry fish balls, pork chop rice, and condensed milk on toast that Tom is munching on above. I was impressed, and happy this style of eatery made it to Seattle – maybe locals finally got tired of going to Vancouver for HK food.


I did my best on the bucket of spicy noodle soup before me, but even the leftovers filled a large takeout container.


Landing at a Siak home is like being with family, we grew up in Atlanta together. I suspect we sort of regressed to our childhood states: eating comfort foods, playing videogames, admiring rock collections. Tom and Gwynne had taken their agate collecting to the next level, with a rock tumbler! This rubbery black tube had been going in the basement for weeks with increasingly fine sand. When it was opened it looked like stones floating in a milkshake. Once washed off, the resulting stones were shiny and smooth. I spent the next half hour fantasizing about how to attach a rock tumbler to my rear wheel, to make shiny stones as I rode. Yes, think of the dead weight I could be lugging in rocks...

My old tire had enough tread to be carried as a spare, but I loathe the job of changing tubeless tires without a machine. Hopefully the new one Brandon put on would get me to the ferry in Haines.

We kicked off the weekend by graduating to our teens: watching Guardians of the Galaxy Vol. 2, coffees and cookies in hand, then perusing Comics Dungeon for Free Comic Book Day. The afternoon passed reading our new comics from the hammock, or at the picnic table in the sun. I dove into Guy Delisle's new graphic novel, Hostage*. With sunlight still clinging to the edges of the sky at 9pm, the day felt infinitely long – this latitude's summer gift, and the gift of happy, easy company. A grocery run later, Tom put on a record, and Gwynne fixed a Korean dish for dinner. We streamed Crazyhead as per Megan's suggestion, but I fell asleep before the end of the second episode. I couldn't remember feeling more at peace, at rest.

* It was a haunting and powerful read. I know him for his autobiographical, slice-of-life travelogues, but was eager to check out this departure from his other work. It was a maddening 15 years in the making... consumed in 2 afternoons. Gah, comics.


Seattle is easy to love on days like this.


Hopping from trunk to trunk, only once did a log turn underfoot and I splashed in some shallow water. Waterproof boots passed the test.

Morgan's birthday cookout was a slice of another life, one that made our party look like poster kids for arrested development. Emily was at the bursting point of pregnancy, bearing the very real possibility that Morgan and their baby would soon share a birthday. Toddlers ran through the grass while their mothers laughed about how they now dress like their mothers, and how maybe their daughters will someday dress like them. The various flavors of abstinence that thrive in the developed world were well represented (glutards, vegans/vegetarians, teetotalers... as a lactard myself I'm not exempt, I've certainly reached a point in life where I value future comfort over the immediate pleasure of mozzarella). It was enough to make me wish I snuck my flask with me.


There was one last adventure in town: Back at Motorcycles and Misfits in Santa Cruz, I'd caught wind of an all-women motorcycle tour of Pakistan being put together by Liza. Two women in Seattle were interested as well. I was going to meet Dionne (4Art&Adventure) and Ruth (Global Moto Adventures) for a tour of Dionne's Ballard studio, and to exchange thoughts on the trip.

I managed to catch Jackie for a quick happy hour at Kickin Boot Whiskey Kitchen beforehand – she was neck deep in Amerivespa organization drama (alas, I would miss it this year), then it was a quick ride over to BallardWorks.

Clearly, I need to find a way to keep a makespace, but still vanish for months at a time to ride... Dionne seemed to manage it.


More on the Pakistan tour later, this northbound adventure still lay ahead.
Posted by 250cc Superhero at 10:27 AM