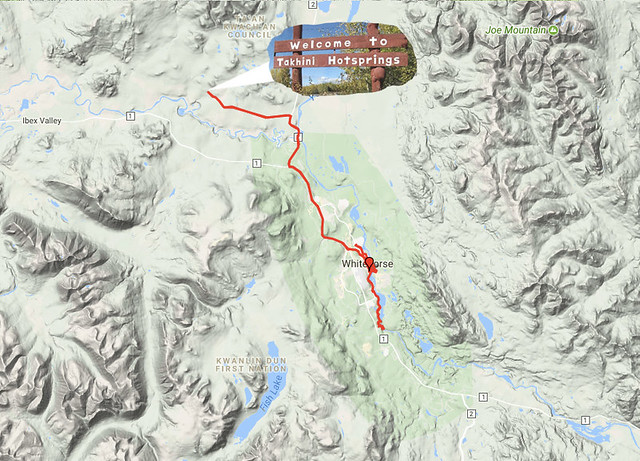 Nothing in Whitehorse is more than 10 minutes away, because if you've gone any farther you're pretty much in the wild. The town was just big enough to have what I sought: a large grocery store where I availed myself to some produce (and gasped at the prices), and a cozy hostel with blackout curtains.

Nancy, a most remarkable woman who manages the hostel in town, informed me that the ferry at Dawson City was operating and the Canadian side of the Top of the World Highway was open. However, no one was staffed at the U.S. Border Patrol yet, so I wouldn't be able to cross. Rain was in the forecast for the next few days as well, so I took this as a welcome invite to spend my days reading in the common area and chatting with other hostel guests.

When I wanted a break from the indoor life, Nancy recommended a mini adventure to Miles Canyon just outside of town.

There were a number of hiking trails and what looked like fire roads, but the gathering rain clouds gave me an excuse to hustle back indoors.

Anyway, I had an appointment with Roberta from the hostel to tour Yukon Brewing.

For the remainder of the afternoon, I settled into a large couch by the window with my book, a handful of raspberries, and a warm buzz (the espresso stout and haskap berry liqueur were my favorites). The chatter of Spanish climbers at the table mixed with whatever was playing quietly on the sound system: Nancy's choice. Roberta worked on her laptop from the opposite couch. It was everything I needed.


On Nancy's day off, she invited Alex and I to join her for her first skydiving experience. Bill came to pick us up for the drive to the launch site near Atlin.

"I think I'm allowed back at the Atlin Inn," Nancy remarked as she threw some warm layers and a 6-pack of beer in the car. Over the course of the day the beer would magically vanish, though I only saw her pound one of them when we refueled at Jake's Corner. She was nervous about the jump.

It was a ragtag family outing. In the car, we could cover distances that would otherwise be exhausting for me on the bike. Along the drive, we paused for scenic views, or for Alex, from Australia, to get out of the car to chase wildlife with her point-and-shoot. The car had a CD player and we found one CD of an artist I didn't know, but Nancy sang along. She would point out things to Alex and I, like the 'free store' on the other side of the road: a cabin where people drop off their extra things, and other people pick it up. Or the origin of the names for nearby Snafu and Tarfu Lakes.

Years ago, I was lucky enough to join a daring friend to go skydiving in New Hampshire. It was several hours of waiting, leading up to about 7 seconds of full adrenaline dump. Optional followup with beer, attempting to chill the fuck out again.

This would be Nancy's first jump. While she waited for the skies to clear, she convinced Bill to take Alex and I for a drive to Warm Springs.

While looking for a bag to hold Alex's watercress, Bill instead found a pair of spare underwear in the center console. Ha, Nancy.

In the end, the skies never cleared enough for even a helicopter ride. We picked Nancy up from the airport for a consolation drink and pot pies at the Discovery Saloon. "That's socked in, eh," she intoned, looking out the window at the stubborn cloud cover.

We took a different way back to Whitehorse, for a brief visit to Carcross.

Adding to the growing list of people way more hardcore than me riding a scooter to Alaska: Cyclists, kayakers, hikers, and alpinists of any variety.

For me, I had hardcore rest and relaxation plans at the nearby hot springs.


Their cafe was more than I wanted to pay for, but it's pretty wild to savor a snowy mountain view while soaking in steaming mineral water.

Flushed and with a relaxed heaviness in my limbs, I found an eagerness to feel the cold tickling the edges of my face through the helmet vents. I was ready for the road again.


News came in that U.S. border had opened on Sunday. A fresh group of guests arrived at the hostel, and the consensus was to go to Dirty Old Bastard for a night on the town. It was a surprisingly hipster kind of place but our party befriended local patrons, and not long into the Whitehorse bar scene a women introduced me to the Burnt Reynolds shot. It arrived on fire, and with instructions to drink it like this:


In an ongoing series of "you had to be there" moments, a very drunk man invited me to pick mushrooms with him (morels were lucrative and in season) before sliding off his seat, and I found a mummified cat before the end of the night.


Our party ended up staying out till 2am and walked back in twilight – a fitting farewell. I was sad to part ways, but the nature of a hostel, as any gathering of travelers, is fleeting. The regular cast of waywards in the past few days – hitchhikers, students, climbers, cyclists, kayakers, seasonal workers, or someone just looking for a home –  were a colorful insta-family after so many miles solo, but after I left there would be no one to share this tiny slice of mutual history in Whitehorse.
Posted by 250cc Superhero at 8:42 AM