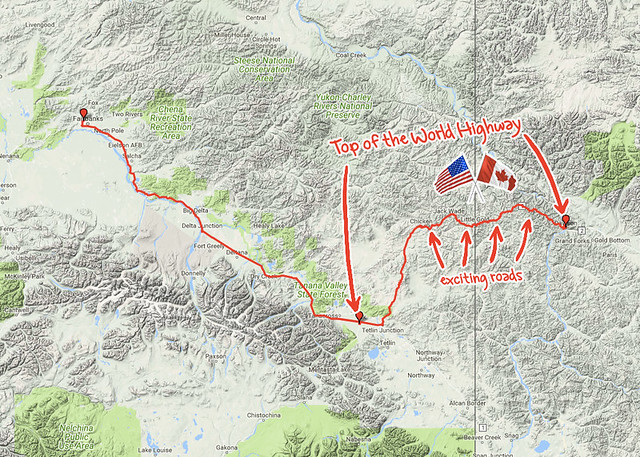 From the Midnight Dome Viewpoint, if you looked on the other side of the Yukon River you could see a pale line etched into the green hills. It climbed in a straight line up the river-facing side of the mountain, then turned in a squiggle that wrapped the crumpled terrain like a dropped a piece of spaghetti. That was my first look at the Top of the World Highway, and that was where I was putting my bike.

'Yukon Time' is a phenomenon similar to Baja Time, in that it's completely divorced from any hands on a clock face. Safe in the knowledge that you're far from urban bustle and next-day delivery of anything, you simply take things in stride. Relax, take your time, take things as they come.

The George Black Ferry operates on Yukon Time. I think the ice caps melt faster than this ferry.

Naturally, I had plenty of time to adjust and made myself comfortable onshore. The ferry eventually arrived to spill out a meager sampling of walk-ons and automobiles, and I found myself sharing the return ride with a single other vehicle:


On disembarkation, the entire ferry tipped like a seesaw. Planks bowed and clattered as the truck pulled itself onto the muddy shore, digging up some fantastic troughs along the way.

And then there was me, skipping along up the hill, on to one of the most northerly highways in the world. 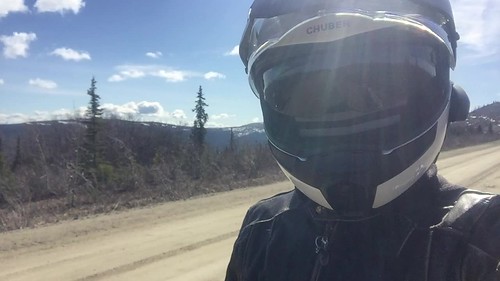 Distant banks of snow splashed like mercury on the dark hills, and a few times I passed an old snow bank melting in dark, glittering rivulets across the dirt. The road itself took wide, sweeping turns, each one revealing a vista into a valley that was a slight variation on the last. I didn't climb to soaring altitudes but crawled along the crests of perpetual hills. They stretched to the horizon in all directions, an unending bumpy landscape that echoed the bumpy gravel beneath my tires. Steady, crunching rocks, under a magnificent lonely sky.

Photos hardly capture the experience, so I didn't take many.

It was 57 miles of well-graded Canadian dirt to a log cabin border crossing, and a cheerful officer stamped me back in. Then the road was beautiful, smooth tarmac.


At least, it was tarmac for 25-ish miles, then it continued in alternating patches of pavement and dirt. Like it was trying to make a good first impression and then gave up.

Oh well, I was still bumping along on Yukon Time anyhow.

Actually, there is a timezone change into Alaska, and I needed to swap my wallet out for this funny green currency too.

The Taylor Highway was narrow enough in parts to slow down for an oncoming vehicle. It dove and soared, taking me from being buried in trees to riding the mountaintops. I passed a small campground on the riverbank at Walker Fork, then the road climbed again for a spectacular view of the snaking river below. Utterly glorious.

The most scenic views seemed to have settled down by Chicken, AK and the road turned to dust.


The cafe had pies on the counter worthy of a Pavolvian response, and stickers that said things like, "For the record, there is not a single mosquito in Chicken, Alaska. They're all married and have raised very large families." I was merely interested in buffalo chili and hot coffee.

...And admittedly maybe sort of chatting up Trevor, a guy from Iowa about my age who was working behind the counter. It had been a while for me, okay? Besides, I was legitimately enjoying bantering about the logistics of seasonal work, travel, and life in remote places. I only considered dry camping in the field behind the cafe for a hot second, a small fantasy within an already fantastic lifestyle.

I hadn't seen a moose yet on my ride, but was recommended to check the pond by the airport – mothers liked to bath there with their young (though I shouldn't get too close). There were no moose, but I found two moose surveyors, about to take flight to count the local population.

The road west of Chicken was more challenging than the Canadian side. It was a rough patchwork quilt of broken pavement, undecided whether to be all one or the other so it was both, poorly. Big rigs had pushed mud in the powdery earth into giant heaving ruts. As the road descended from the hills and became more exposed, the wind blew more dust sideways across the gravel and up my visor.

But it didn't last long. The highway steadily became more solid, and was smooth sailing by the time I picked up the Alaska Highway at Tetlin Junction. All told, it was only about 90 miles unpaved.

The last 15 minutes into Tok were easy and dull, compared to most of the day's miles.


Thompson's Eagle Claw Motorcycle Park had been recommended to me for overnighting. It's an awesome, cozy camp, built with love. There's even a shed with tools for fixing your bike (I left a sticker for the toolbox).

After settling in and touring the grounds, I scooted back around the corner for a hearty dinner (with more fries) at Fast Eddy's. 2000% increase in french fry intake.

It was a bit weird, using American currency again.


Vanessa put the outdoor sauna on for me and the only other guests at camp that night: the couple whose sidecar rig I saw in Dawson City! I ran into them in the bath house, and muddled through my very limited French and her limited English. They had taken a year off to travel around the world, and were currently headed to Ushuaia. Cool!


The cabin I chose had four bunks with a lawn chair pad for each. Since it was only me, I channeled some Princess and the Pea and rearranged the furniture. In the end a legume didn't disturb my slumber though. After shutting the door on the midnight sun, it was the high-pitched whine of a single mosquito in the cabin that kept me awake all night.

I narrowly dodged making a rabbit pancake on the Alaska Highway leaving Tok, but the last stretch of miles into Fairbanks were fast and easy. A metal bridge over a frozen river here. A fill-up at Delta Junction there. My only trouble was that all coffee businesses seemed to be drive-thru, and after hitting some passing rain I had no place indoors to warm up. Outside temperatures dropped to 4 C, and I was shivering uncontrollably by the time I finally found an indoor restaurant. I poured hot coffee into my insides and pretended my chicken tenders were ptarmigan.

It was deceiving out, sunny and bright, but so cold. The road had no more surprises for me though, only the shock of returning to a city.


I was recommended to Sven's Basecamp Hostel, and they were friendly and cozy, but it was too cold for me to stay in their outdoors-style camp. Billie's Backpackers Hostel was full, but I must have looked worn out and Billie kindly rented me a couch at a discounted price.

That evening a violent hail storm blew in, but I was indoors and warm. A younger group visiting from the Anchorage military base turned up. They had bottles of wine for national wine day, but no opener. I volunteered mine, offered my bottle to the mix, and guided them through a tasting. They were all cheap wines, but that's not what matters here, is it?

It was still bright when I went to bed at midnight.
Posted by 250cc Superhero at 2:19 PM