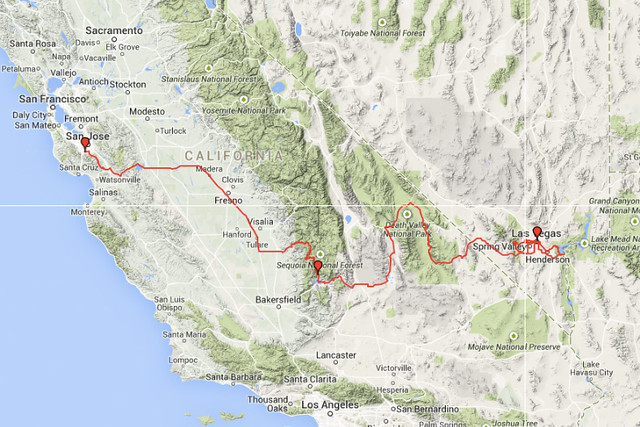 Picking up where we left off, I'd arrived just in time for the last night of the Las Vegas Bike Fest. My friends, Sash and Steve, already had a room at the Downtown Grand – it was going to be Motorcycle Camp again, but ritzier! They'd been working all week, so it was time to go out. Unable to just sit idly by with the party right downstairs, I rinsed off, recharged, and joined the leather and bandanna-clad fray (or not clad, for some).

Feeling a bit super the next day, the three of us hit the new strip for Sash's birthday dinner: Brazilian BBQ.

It's about now that Rob and Kath texted saying they woke up to frost on their bikes. Here, I'm frolicking around in a summer dress. Ah yes, going from all the layers to as few layers as possible, within the span of one riding day.

So after two days of 'Vegas' old strip and new, this desert feeling was sort of getting to me. I had a powerful craving for a fresh banana, any fresh fruit actually. Still tired of riding, I wandered the daytime streets by foot in search of the elusive fruit, but was only met with drinks specials, cheap tank tops, and pizza. After three gas stations, a couple restaurants (buried in casinos), and a hopeless search for a grocery, any grocery, dehydration was setting in. I finally stumbled into an enormous Walgreens and loaded up on coconut water, a green apple, and the much desired banana. As soon as this headache goes away, I'm getting the scoot and pointing it to a Trader Joe's. This fake plastic town caters to impulses and overindulgence, but people do live here on a day to day basis. I'd just need to scratch deeper to find low key spots.

Rob, whom I met at Bikefest, invited me over for some tooling in his garage. I was more than happy to get away from the density and lights. He apologized for lack of excitement, but some unstructured downtime with scooter folk was just right. We capped the night with waffles (mine with fried chicken) at Blueberry Hill with his family.


Having found my bananas, replenished my cooler from an actual grocery store, and rested up from distance riding, I left the city for a couple day trips to see the sights, as they say.


On a sidenote, I hadn't realized that prior to Vegas, I had my longest unbroken streak of nights camping (5 nights, rallies notwithstanding). My soft urbanite soul may wield a tiny titanium spork yet. That being said, I'm already exponentially more appreciative of the magics of a soft bed and climate control. Every night at the Downtown Grand, I sank into the most deep, delicious sleeps.

Sash came out of the bathroom laughing, "You're going to give the cleaners a heart attack!" I'd left this ostrich egg in the sink to soak, trying to remove the dirt in that one spot on the towel.

It came from Rachel, NV, when Mark and I dropped his uncle off at home. I darted inside to use the restroom, and discovered a hoarders nest. Mark had warned me, but my bladder persisted. This home was like an antique store that manifested a will of its own, and shed junk instead of dead skin cells. Business done, as I picked my way back to the front door my natural curiosity got the best of me. The egg caught my eye. "Do you know what this is?"

He just responded, "Do you want it?"

And that's how it came to live in my saddlebag. It's certainly one of the more odd things I've carried.


You know there's no way I could resist taking the tallest slide. It's actually quite terrifying. You have no idea which way you'll be thrown in the dark, and it's an unnervingly long ride. It really is an adult playground here, and not in the adult way most people were probably thinking!

It was a shame that Sash fell sick shortly after her birthday, and we didn't get to hang out as much as I'd hoped. In spite of that, I'm truly thankful for her and Steve tolerating me sharing their personal space for as long as I did, and letting me see them not at their shiniest. They both lead incredible lives, but often I suspect people just see the flashy side (especially Sash – seriously how does she carry such a fabulous wardrobe on her bike, saddle bag of holding?!), but don't see the pain and well...the other, less glamorous side. They form a nomadic team, playing to each other's strengths and accommodating for weakness, to make this live/work/ride thing work. I am a Padawan.


Death Valley is a fever dream to ride though, hemmed in by mountain ranges. It was a far more intimate experience from the seat of a bike than a car (go figure). It felt like all the roads were new, yet the routes were already familiar to me (sweet, because I didn't pick up a map from the east entrance!). Distant glinting cars crawled like beetles along the roads, which blurred into sand at the edges. I hit a long stretch of gravel construction outside the park. The sheriff's car followed behind me for a while, then blasted past in a cloud of dust when they lost patience with my cartoonishly plodding pace. The town of Trona, and a series of other empty, unfortunate towns were strung along the state highways like burnt out Christmas lights.

In an astounding contrast that just seems to be California's thing, while I was still contemplating the desolation of the desert it turned into hills and forest. The Sequoias greeted me again.


I overnighted at an infuriatingly expensive campground in the town of Kernville, a saccharine tourist blotch in the otherwise lovely Sequoia National Forest. Drat, I knew I should have stopped earlier at Lake Isabella. The riding was so lovely though, I rode till the curtain of darkness dropped around me and my options were limited.


Again, there is nothing redeeming about the middle of California, except possibly this fruit stand by the highway. I bought some sweet plums and the guys at the table invited me sit with them in shade while I ate one. I didn't speak Spanish and they didn't speak English.

It's always harder for me to 'come back', but Kevin's guest room does have a soft bed. Back to Bay Area for now, and settling in for winter.
Posted by 250cc Superhero at 5:22 PM