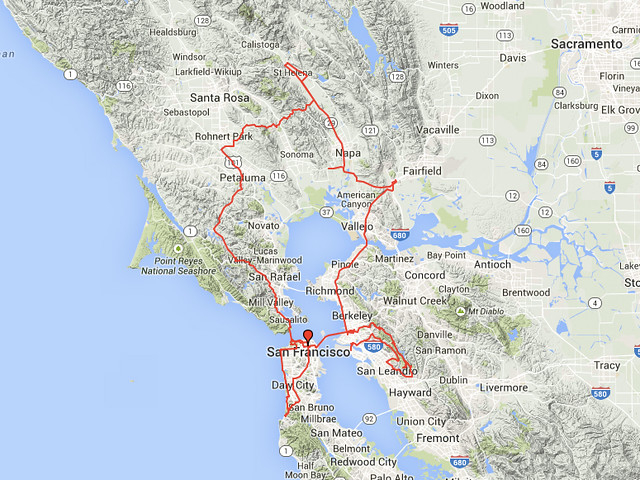 Welcome to the last installment of the Bay Area posts. In total, I will have been bouncing around this motorcycle paradise for about five (5!) months.

I recall the locals referring to 'a storm' one evening, in California winter. The air was buzzing with a need to buy milk and bread. Riders hustled to park their scooters in the lee of cars.

In the end, I think it was kind of windy and it rained a bit, but several places throughout the city lost power. How cute, California, I thought in contrast to the nor'easters of uh... the North East. I guess I better go before I get soft, as they say.

Harnessing the power of the Vespa extended family, Pete and Vespa SF had been putting together a raffle for weeks to help outfit my ride back east. At the inaugural first group ride of the year to Sea Bowl, we held the drawing for prizes and he presented me with a box full of things like the fanciest merino wool hoody ever (I've been stealing Pete's all the time), smartwool tights and socks, a silk sleeping bag liner, and spare fuel bottles. Thank you all so much, and to Pete for putting together the gift box! I'm so touched... Bonus, terrifying the streets with the local Vespa mob again.

Serenity's back from the shop! Funny, I didn't realize it but I had a feeling of homelessness, until my own bike returned. Not only was my scooter back, but she was riding fantastic. Tom did a number on her at Vespa SF, including a complete fluid flush, new speedo cable, repacked the front fork bearings (seems to have reduced wobble), installed a new rear tire, adjusted throttle (woo, tight again), replaced belt, variator, and rollers, new spark plug... the list goes on. It was an epic service, and the most amazing part? Piaggio stepped in to pick up the tab! I am the happiest scooterist alive and I cannot say thank you enough!

Back at Lisa's birthday party, I'd heard of a hillside in Napa called Glass Mountain. It was a unique geological location for naturally occurring obsidian. Cobbling together bits of information from the internet, I had the opportunity to put together my own tiny group ride to find this elusive mountain. Part of the agenda was to discuss future group ride plans for modern Vespa gatherings in the Bay Area. It would be just me, Verna, and Pete for this jaunt though. I gleefully shirked work to chart a 162 mile route, complete with coffee breaks, fuel ups, and everything from goaty roads (nods to Rod) to Interstates, all tailored to the scooterists' range.

It rained intermittently as we left the city, but cleared up by midday. The three of us rolled through picturesque hills, dramatically lit between the receding clouds. Temperatures were perfect. When we turned off the more traveled roads, I paused at the end of the pavement. Beyond was the canopy of dark, looming trees, shading a twisted obstacle course of muddy potholes. If we were in Middle Earth, I would check Sting for a blue glow.

"Hey guys, I know I said there would be some goaty roads. Are we good to continue?"

I believe Verna gave the verbal equivalent of an enthusiastic fist pump. It's so awesome to know other people who will take their urban-rooted vehicle way beyond its comfort zone.

Also, it seems Napa is dotted with perfectly spaced towns for scooter hopping.


GPS indicated that our destination was somewhat awkwardly around a bend in the road. No matter, bikes fit neatly in a pull off just past the hillside.


Before I left the Bay Area, Lisa wanted to paint my portrait for her watercolor series at Manifesta Salon. Pretty cool to have the artist tables turned, and always great to see her even if in part to say bye. Check out her process and end result on her blog! I think I appear surprisingly fierce.

Also, if there's one thing I splurge on on the road, it's my haircut. KC cut my hair particularly short this time 'for longevity,' which was much appreciated.

As I descended the bridge back to the city, a call came through my phone. It was an unrecognized number and I couldn't answer while riding anyway, so it wasn't until the next exit that I pulled over.

"This is San Francisco General Hospital..." I thought I heard her say. I had to listen to the voicemail again.

There was only one person it could be about. Pete was in a motor accident. I called back and a social worker apologetically told me, "He said something about the dogs," and to ask for "Trauma, India." Fuck you, you're not leaving me your dogs, I thought as I punched in the address and sped to the emergency room. In my head, I knew that as a rider there's a certain amount of risk you must come to terms with being on the road. Any infraction with a car is unlikely to end in your favor, regardless of who's fault it was. In my heart though, I had anger and fear. I raced through the city, Please be okay, we're going to ride to LA together. I braced myself for blood, bones, even last words.

For a traumatic care unit, they seemed rather buried in an impenetrable, maze-like building. The police officers seemed irritated by my urgency when I was unsure where to park (come to find out later, they were present due to a shooting the same night. Yikes). Pete was conscious, though woozy, and getting x-rays when I arrived.

"Oh hey, you're here. I wasn't sure if you left yet. I thought you were in LA, or Mexico," he said when I appeared. I cried a little inside but knew he must have been on some good stuff.

I stayed with him as he was shuffled to different rooms. Around 2am, he was released with a concussion, and fractures on the right side of his face framed by a brilliant purple shiner. The next day he would be called back to address more fractures in both wrists they hadn't spotted before. Pete has no memory of the collision, only headlights and waking up in an ambulance. EMTs had used his finger to unlock his phone to reach me.

Time stopped for me for the following week. I passed the hours with him waiting for tests, remembering to feed the dogs, following up on the police report number that was left in his wallet, and picking up the Super from the tow lot. A part of me felt like he'd been stolen from a more tragic fate.

The elephant in the room was that we had been planning to leave the city together, he would ride with me on the Super as far as LA before turning around. I could share just a little taste of my style of distance travel. We knew it wouldn't be possible with his injuries, but the topic remained unspoken.

I couldn't tell if he was remarkably upbeat because I was near, or if he needed help. I admire the quality of not letting things slow you down, except in those instances you need to heal from, oh, stopping a car with your face. Finally, I found a worse patient than myself.

We had a farewell lunch date with Toni, from Vespa/BMW San Jose. Stubbornly, we decided to go two-up.


It was a fun outing, good to see Toni (badass rider), and even great with Pete pillion. He was my first passenger on the Interstate, and also on twisties. On the ride back, I felt him lean into the curves, which just made me go Aw yeah! and lean harder. I scraped the left kickstand and almost forgot the reason he was on the back in the first place.

I don't know how much of his boisterousness was showmanship, or his usual personality peeking through – his affectations generally begs the question of how many coffees he's consumed in the past hour. However, hospital paperwork duly informed me it can be over a year before concussion patients finally feel back to normal. I would be here this week to help, but my journey would take me elsewhere soon. Accidents don't care about your plans.

There was no way he would let this stop me though, and I wouldn't have it another way. During his frequent naps I was busy contacting relevant parties, gathering supplies, and organizing shipping.


In matters of the heart, I could never deny mine. My heart wanted the road. I worried for his post-concussive state, but knew that the right course of action was to return him to the wild – his support network, the one that existed before I scooted into town.

Besides, both of us like being single too much (I feel I'm committed to my bike, does that count?).

It was time to leave, and let our relationship take its next form, whatever that may be.
Posted by 250cc Superhero at 8:45 PM