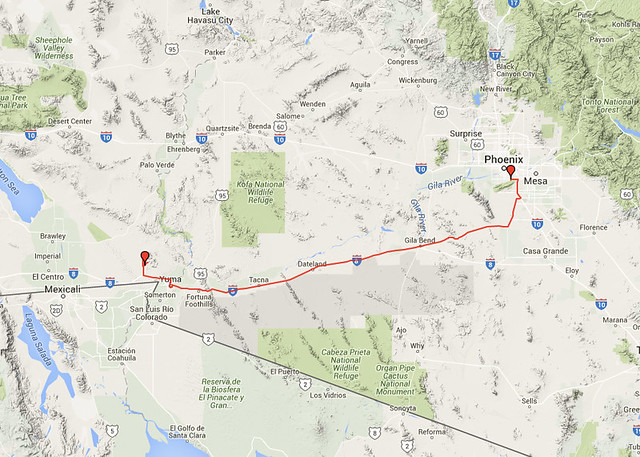 This map is a bit misleading.

Part of the press to turn north again was to meet up with Tim (previously referred to as the Giraffe) for a southwestern road trip. The map above doesn't cover car territory – this is partly because I'm more concerned with scooter tracks, but it's also because we only had one charger in the car and I couldn't keep my GPS running all the time. In any case, this would be a bit like a whirlwind vacation from riding for me, a rest from the emotional intensity of Baja as well as catch up time with a dear friend. So, less talk and more photos now?!

The desert doesn't know borders, but I suppose it was sort of a relief to be back on US soil – I had cell service, in spite of setting up in the middle of nowhere.

Outside a market before I set up camp, a rider with a mohawk helmet that matched his yellow Honda sportbike pulled into the gas station lot next to me.

"Where you headed?" I responded that I was going to camp outside Yuma about 15 miles west. "Oh, I live in town. Just got back from a 40 mile ride from the east. You come from east or west?"

"I left from Ensenada this morning."

And conversation kind of halted. "You... must really like riding," I think were his parting words.


Before I left my desert campsite though, I had a ghost town to check out: Tumco. It's one of the earliest mining towns in California, and it's still being mined today.


Due to being sick in Ensenada, I would only be pausing in Phoenix for a night before taking off with Tim again. As per usual, the mileage and pace demanded a rental car. Waldo, whom I met at the Las Vegas High Rollers Rally, graciously housed my scoot and took us out to an Ethiopian feast.


Although touristy, Tombstone, AZ was actually pretty cool. I got the sense the locals and actors just want to preserve the history that put the town on the map.


With the persistent rain, Tim and I bailed on camping the first night and stayed in a motel in Nogales, AZ (where he repeatedly got lost and kept pointing the car towards the Mexican border, without his passport, but that's another story). Although I'm perfectly happy to split motel costs when I can, he was determined to use the camp kitchen he hauled on the plane with him so we found a nice spot in Aguirre Spring.


We only had time for a drive-by of Albuquerque, which was enough to determine the city is trapped in the 70s...in an awesome way. I loved the old neon, and the general aesthetic, against the backdrop of desert scrub. Also, please put green chiles on everything, I am definitely okay with this.


In three short days, we blasted through places Bisbee, Tombstone, Nogales, Douglas, Duluth, Asheville, Holbrook, Payton... I don't even remember in which order, I only remember the names in my notes. Tim was on a timeframe, and I was along for the ride. On the last day, he drove 635 miles back to Phoenix to catch his red eye back to Providence, RI – an unthinkable distance for me.

I settled back into Phoenix to rest at Waldo's. It was good to be reunited with my scooter again, and chill with Waldo. I felt ready to explore the southwest on my two wheels.