Navigation is an entirely personal process, but I've been asked often enough about my system that here's a post about it!

As far as picking where to go, I've come to plan around fixed-place dates (weddings, graduations, rallies), friend's places, work deadlines, and climate. Then I fill it in with anything else nearby I hear is worth a visit, or want to see!

Before I set off, I sit down with my laptop and fire up Google Maps to get an overall view of the territory (there's usually coffee and snacks involved here). I pick a few waypoints, and get an estimate of distance and time. I like to look for interesting geography to follow, like rivers, mountains, or parks, or sometimes roadside attractions. If I have a chance, I'll ask whoever is local for things to check out.

Generally, I plan to ride about 200 miles per day – I've found that it's just enough to cover distance, but leaves room for things to come up along the way. However, this number is closer to 300 miles in the Midwest, and as little as 100 in dense regions like the northeast, or just places I feel like taking my time. Speaking of rest, I try not to change locations more than 4 nights in a row without taking a rest day. It took me the state of Florida to figure this out, but it's just the pace I enjoy!

Once actually on the road I primarily use my smartphone for navigation. I rely on three apps, plus some paper and whatever locals tell me. 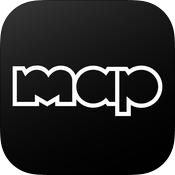 Mapquest is the only app I've found that allows you to drop pins and plot waypoints. This is great for getting a fairly accurate total distance and arrival time estimate, for finding gas stops (great to use as waypoints), alerting hosts, or timing arrival for just before sunset. Unfortunately, the app was a bit buggy for a while and crashed often, meaning if I find myself in a place with no cell service I've lost my route. I've found it's good practice to memorize the cities I intend to pass through, as well as route numbers. Assuming some of it sticks, even if I lose a route I can follow signs, like they did back in the old days. Once set up though, this is my favorite app for just zoning out and letting autopilot do its thing. 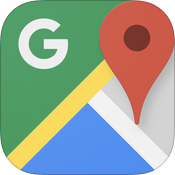 For local navigation, I use Google Maps – caveat being that I don't necessarily follow it. I take both freeways and surface streets, and find the all encompassing 'Avoid Highways' option doesn't always give me a route I like. However, I like the detailed lane diagrams and find the interface most intuitive, so if I'm in a region that I'm confident of cell reception I'll request directions only to the next city along my overall route, highways or not. Upon arrival in the city, I plot a new map for the next leg. Alternately, I'll just take the route I memorized beforehand or a locally recommended route, and ignore Google until it reroutes to my preferred path. Google also seems to be most reliable for things like traffic and road closures, but I would still take it with salt. 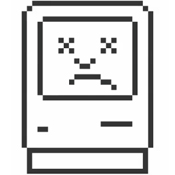 The last app is called GPS Kit Free, which is sadly no longer available (this is all I could find of it). All it does is show you a map and draw a line where you've been, glorious in its simplicity. This is my favorite for exploring, and often what you'll see on my screen. I've followed many a twisty little road just because it showed up nearby on the map. Because you can pre-download the map, if you lose signal or are outside cell reception, you still have a useful app. All of the maps on the blog are tracked with this app, then exported via email to myself and plotted on GPSvisualizer.com. I also use it for total miles tracked. In Canada and Mexico, this was the app I used in addition to verbal instructions and notes. I'm terribly disappointed it's no longer available, and taking suggestions for a similar app. 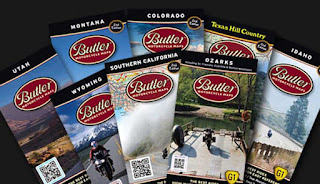 A few people have turned me on to Butler Maps. These are fantastic and motorcycle specific, but you need one for each region and I changed regions too often to justify buying so many maps. That being said, if you're hanging out in one place for a while, or can borrow one, this is the map to get.

I had someone at a truck stop recommend a road that turned out to be the Kancamagus Highway in New Hampshire, and followed motorcyclists to ride The Snake in Tennessee. I highly recommend to leave room to get a little lost.

In other notes, before I left I downloaded the ebook version of the Rand McNally Road Atlas as a redundancy, since it doesn't require cell service to use. It's simply a digital version of their real media atlas, which I felt was too bulky to pack (wise decision actually, every paper book I've carried has been destroyed by weather, but I keep my iPad in two levels of waterproofing and carry a spare battery, so digital books are working out). However, I have yet to use this in a pinch. I'm just more likely to ask for directions, and less likely to find myself somewhere so remote.

I've also found Glympse useful for letting those expecting me know where I am, and whether I'll be late (likely, it's scooter time after all).

All of this may change when I find myself without a data plan, but this is how I currently get myself around the U.S. and some parts of Canada and Mexico. All of the above apps are free, too.

Final note: Although I primarily use my phone's GPS for navigation, I certainly appreciate the ability to read paper maps. I seem to be on the cusp of a generation where this knowledge is dying out – those a few years younger than me are less likely to know their way around a paper map, those a few years older are uncomfortable or just don't like using GPS. I have a distinct memory of a childhood road trip from Atlanta, GA to Houston, TX, when my father taught me how to read an atlas. While I find the sheer convenience of GPS hard to beat, I still value this knowledge today.
Posted by 250cc Superhero at 4:18 PM