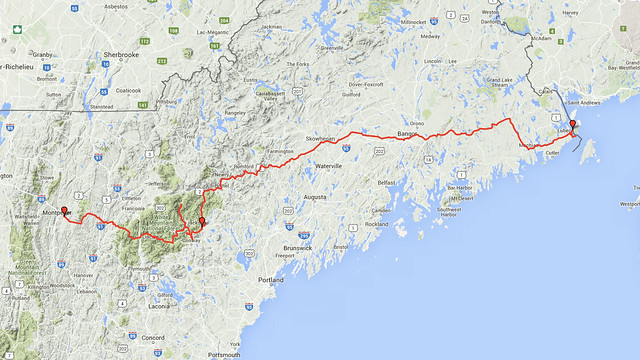 New England is a creaky floorboards kind of place, home to history, turned wood furniture, quilts, and closets that make me wonder if monsters dwell within. There's something a little magical here, but it's a salty, old-world kind of magic. It's where a younger version of me first found romance, which I followed to break free from the inertia of New York City. It's where I first experienced anything close to a 'real' winter (and then proceeded to endure 7 iterations of it). It's where I learned to ride, and attended my first rally. It's coastline and woods and winter. Now that I was full of the tastes of the rest of the country, I'd come back, maybe in part to see if that magic still held.


At an enormous truck stop outside Woodsville, NH, a man dressed in flannel and white stubble (the prevailing style these parts) struck up conversation as I geared up. After the usual Where are you headed/Where have you been exchange, he revealed himself to be a native and expressed his love for his simple, rugged home. "When I want running water, I fill a pail and jog around the yard," he waxed on poetically. As we parted, he advised, "Take the next right after the Walmart, it's a road motorcyclists really love."

Those damn understated New Englanders. I had no idea he'd just directed me to the Kancamagus Highway.


Finding the Kancamagus Highway by accident was like stumbling onto Cherohala Skyway by chance, but deeply forested instead of sweeping mountaintops. I was blissfully lost in good fortune and trees, and didn't take any photos.


The day was young, and soon the road bid farewell to the close embrace of forest and returned me to open mountainside. I remembered a peak I'd climbed in a car and cog train some years back: Mount Washington. New England's own record-holding mountain may not be known for height (6,288 feet above sea level is modest compared to the west, and I'd already scooted Mt Mitchell's 6,683 ft) but for extreme weather and early American tourism.

I figured I'd make a go of the Auto Road while passing through, but was met with rude gatekeepers and layers of bureaucracy. Apparently some years back, an idiot rider cooked their disc brakes on the way down and either died or lived to sue, and since then only geared motorbikes were allowed to make the climb. I hung around the visitor's center parking lot for several minutes finding exceptions to this rule on my phone, and spoke to a few higher up who were overly concerned with the make of my vehicle somehow being exceptional rather than the driver not being an idiot ("Is it a Burgman?" was thrown around a lot, and I almost wanted to say "Yes"). Eventually, I would have had to await the judgement of my ability by one more higher up, who of course wouldn't be in until tomorrow. I think it was a relief to everyone at the toll center that the two-wheeled potential lawsuit decided she'd rather make it to Lubec on time than wait another day.

After all, it was just something in the neighborhood. It does beg the question of why I'd want to climb a freezing, windy mountain at all, but why else would you have a bike except to go places?

So here's some video from the observatory at the peak. It's pretty crazy up there.


I was feeling slightly frazzled by my war against the gatekeepers, but getting back on the bike and riding fixes any bad mood.

Matt (BCCMatt) on ADV Tentspace texted to suggest to meet me at the Walmart in town. I've met countless awesome folk from all walks of life through the Tentspace signup, but was surprised when what appeared to be a teenager rolled up in a Forester. The goodness of hosts united by love of motorcycles has been proven to me time and time again, but I couldn't get a read on this lanky youth. He was friendly but said very little, except that he needed to pick up a laundry basket. In my experience, it's a boy's duty to be aloof or even obtuse for the teenage years, but I felt a little wary to be following one into the woods to stay overnight. He seemed at ease though, so I texted a few friends my location and reckoned I'd assess the situation as it unfolded.

"There's an easy way to our house," (oh good, a house is a structure, 'our' hopefully implies parents and not a Boxcar Children setup?) "But there's a shortcut I like to take more. Do you like steep, twisty roads?" Matt asked before we set off.


Of course, I had nothing to be nervous about. Matt's father, Tom, welcomed me in ("Did she like Hurricane Mountain Rd? I like her already!"). Over a spaghetti dinner, it was revealed how Matt found himself associated with the ADV crowd even though neither of them had bikes – Matt had a bike before, but now found a knack for photography at rallies and races. True to form, shortly after dinner he disappeared to his screens, to edit photos into the night. Not unsociable, just focused.

Tom told me about the his family and the history of the county, how he moved to NH for the seasons, the climbing, cross country skiing, canoeing; "Granite in the summer, ice in the winter." His outdoorsmanship was inspiring even for my espresso-and-sushi bred blood and fed into my earlier fantasies of touring the country again, hitting climbing spots this time the way Jack goes to skate parks. There are so many ways to understand a land. In his kid's old room, I reflected on how Tom had built this timber frame home himself – how cool is that? I didn't grow up around work so tangible, which must explain why I hold such a wonderful romance for physical things and objects crafted by skilled hands.

I think I fell asleep next to my new massage rock.


Logging and lakes dominated the scenery until Bangor, after which the landscape suddenly emptied of human activity entirely. I poked around some derelict summer rentals, but mostly I just rode and rode. The sweet smell of pine forest floor turned cold and picked up the tang of salt, filling my head with visions of the sea. It was exquisite, and pulled me forward like the proverbial carrot on a stick.


Embarrassingly, I was so excited I think I have about 50 photos of my bike by the Lubec sign, and I hadn't even reached the easternmost point, West Quoddy Head.


It's difficult to capture the entirety of my emotions as I pulled into the lot of the lighthouse – excitement, accomplishment, not to mention awe at the natural scenic beauty of a lovely day in Maine (I got lucky!). I knew that even though I'd reached the fourth corner, the journey wasn't over. Tomorrow, I'd get back on the bike and keep going, doing the same thing I was doing the day before. It's completely arbitrary when we decide to end a narrative just for the sake of narrative.

Overwhelmingly, I felt free. I'd set out with a goal and framework and put myself out there. I put everything on the line, and doubted myself regularly. To my utter amazement and pleasant surprise, the world received me positively, and so many people pushed me along and helped me keep going. When I began I needed the structure of visiting the four extreme corners in the contiguous U.S. to give me direction. Pulling into Key West was marvelous, because I didn't know it was within me. By the time I found myself gunning for West Quoddy Head point, I was already confident in arrival. 34,488 miles and nearly 15 months later, I'd found much more than four corners. Checking the last one off felt less like a finale, and more like a graduation: this sets me up for whatever is comes next!

It seemed too fitting that a rainbow appeared as I rode back to town to fulfill my B&B reservation. In my happy reverie, I pulled over to take a photo. The road was narrow and somewhat traveled, so I left the bike on its side stand instead of center stand with the engine running, in case I needed to hop on for a quick getaway. I backed up for the shot, and went to adjust the handlebars...and accidentally tapped the throttle rocker. My bike shot out from under my hand, and landed on its left side a few feet away.

So now that I've checked the easternmost point off my list, I can dump the bike, right?


Lubec, ME may just be the epitome of adorable New England summering, and I found Water Street Tavern & Inn easily in the tiny town. The owners greeted me warmly and were excited about my story, showing me to the most luxurious room I'd ever booked for myself on this trip. The meals at the tavern below were beyond my price range, but I felt full enough on an earlier jerky bar and settled at the bar for a glass or two of red wine. I stuck out like a sore thumb among the more elderly clientele, but I didn't mind listening to their debates as to whether to sell their powerboat in Florida, or which parts of Italy were their favorite to vacation. I was taken in by the warmth of the wine, and the the view of the bay as the sun extinguished itself on the opposite horizon.


I wouldn't have had the wisdom to set out looking for it, but somehow in all those miles I found something good for myself.
Posted by 250cc Superhero at 4:09 PM