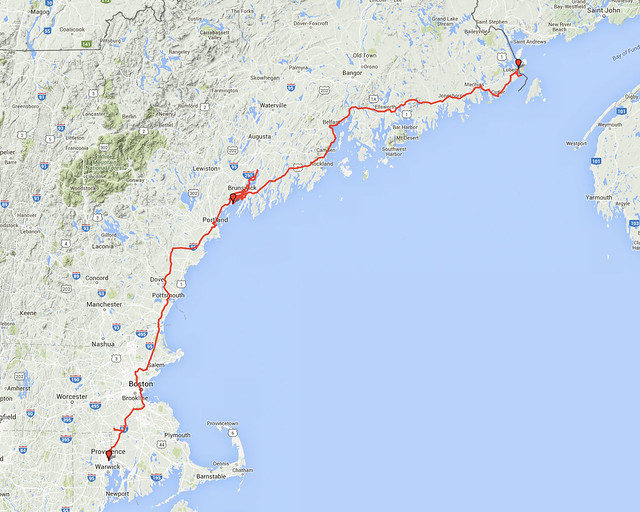 The morning came too soon. I wished I could stay longer to celebrate, but life for this full-time scooterist is rarely easy. However, it's rarely dull, and often it's beautiful and fun. It was a new day, and I had many miles to cover for an appointment with a new rear tire in Brunswick, and a scooter rally in Topsham!


It was difficult to tear myself away from the luxury of crisp white sheets on a king size bed, but the pampering had worked some magic: the knot between my shoulder blades seemed to have released somewhat. As I emptied the room to load my bike, I looked over the big, now vacant space that I had spent a night. Fine, tasteful furniture and fabrics. A big bathroom and shower with endless hot water and lofty white towels. More couches, armchairs, and seating than I could find occasion to sit in. So many pillows that I immediately tossed on the ground (they're blocking the bed!). A flat screen TV that was entirely ignored in favor of staring out the window, lost in the colors of the bay changing with the sunrise. I knew I needed that night to take care of myself, to rest, recover, and pat myself on the back for finishing what I set out to do 15 months and a different person ago, but... the luxury seemed like such a waste for one night.

The name of this blog started as a joke, when a friend called me a "50cc superhero" on my first scooter. When I acquired my 250cc ride, I upsized the name by extension, though any actual acts of superheroism were irreverent.

Now, it struck me if I truly had a superpower it would be this: I'm willing to go without, for a long, long way.

People have asked if I set off because I was fresh out of school (a natural transitional point), or was stuck in a dead end job (no, though it felt like it plenty), or if some sudden tragic event befell me (thankfully not). No, I cultivated a career, friends, hobbies, romantic interests. I'd played the good domestic game, assembled a comfortable nest, understood the value of a kitchen island – I owned a salad spinner. I was willing to give it all up to pursue... what is it I pursue? I never set out as a vacationer. Was I seeking a broader understanding of the world, its people, and my place in it? Was it so grandiose, or did I simply need to upset my life?

What do you do when you realize what you're really, really good at is being uncomfortable?

In a reflective mood, I finished loading my bike and punched in directions for Tri-Sports – the first thing to do was get my two-wheeled home a new rear tire.

I may never understand the reason for so many pillows.

I cast a wistful look out towards Canada before turning south. Even after I got a new tire, I had a work comittment coming up that required me to stay put for a while again. With accommodations in Portland, ME rising for the summer season, staying with friends in RI and MA was the natural choice.


Apparently, in my emotional state the day before I'd completely missed the "Easternmost Point in the USA" plaque at West Quoddy, so I went back to poke around some more.


Two years ago at the Maine Comics Arts Festival I spotted a poster advertising a scooter rally in Topsham, ME. I'd never heard of such a thing, so Ski's Shrimp Run 2013 became the first scooter rally I ever attended. I didn't know anyone and was outstandingly unprepared, but I was hooked. It seemed fitting to bookend an epic trip with the same rally, two years later. Time for the real party!

"If that ends up on my bike, I'm burning it in the campfire," I made it plainly known. It's all well and good if you'll just shove it in your car and take it to your home where it'll live in the corner until the next rally, but every square inch of real estate on my bike was measured and valued.

Subsequently, someone thought it would be funny to jam it onto my floorboard. Let's be real, we know who's responsible for this. It was Kyle (you may remember from the Las Vegas High Rollers rally).

By the next ride stop (lobster rolls!), I was ready to make the bear a sacrifice to the rally fire gods, until I spoke to the previous owner. A sweet older gentleman, he'd dressed the bear in a hi-vis vest for the ride to the rally in his passenger seat, and had named the bear Target. Great.

I was really starting to stress about this giant bear as we approached camp and its imminent doom, because I knew the previous owner wanted it passed on. I'm glad someone volunteered to adopt it for their niece, rescuing it from a more fiery fate. I can only assume Target is living out it's days in a suburban Maine household as a trampoline for a small human child thing.


Saturday night shenanigans stayed relatively tame this year, perhaps since we were asked not to return to the other campground after what happened two years ago (campgrounds are so hoity-toity around here!). Just some fire and drinking with good folk. In a nostalgic daze, I admitted to John, another attendee of the inaugural rally, how nervous I'd felt showing up that first time. He was surprised, apparently I'd hidden it well. I suppose it always seems like everyone else knows what they're doing at these things.


After packing up on Sunday, Kyle caught up to me in Portland at The Holy Donut. We decided to wait for Novare Res to open at noon for one more road beer. As soon as the doors opened we sidled up to the bar and the bartender slid two coasters out.

"I need something to help me drive to Boston today," Kyle announced.

"So, something low proof, a session maybe?"

I'm pretty sure he ended up with some ultra-malty coffee-porter beverage, versus my fizzy tart choice. Rally never dies here.

Tim had driven from Rhode Island to share Rt 1 down with me, and we crossed paths just south of Portland. Along the way we rolled into Zo's place outside Wrentham, MA where Jim was tooling on his old Volvo. Many of these people I hadn't seen for months, or since I left RI. It felt like the band was getting back together.


I hadn't planned on finding myself in RI again, but it was great seeing friends I hadn't seen since leaving what felt like a lifetime ago. It was a welcome change to navigate by instinct instead of GPS. Now that the last framework of my life had been exploded, the question loomed larger: What do I do with my time on earth now? I was tired (more tired than I knew), the longest commitment I'd made to myself outside of formal education was behind me, and I had a work deadline coming up. Maybe Providence felt like just another stop on the road now, but it was a welcome respite to crash back at Tim's place while I figured that out.
Posted by 250cc Superhero at 12:59 PM