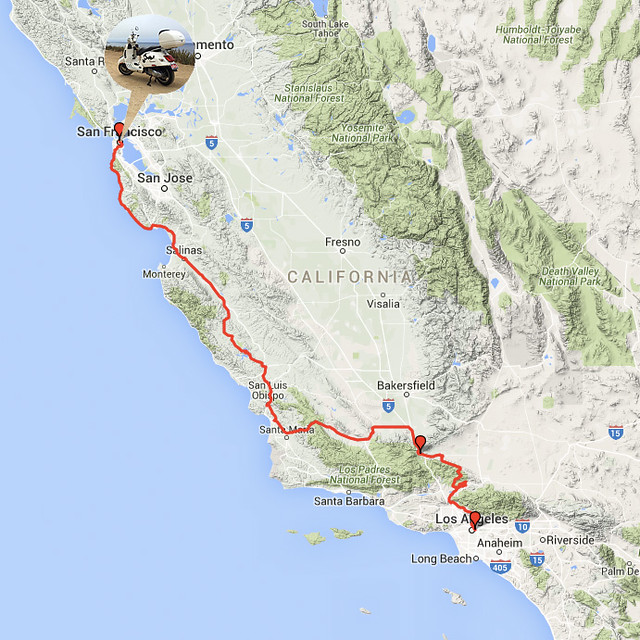 It was time to return Endy2 to his keeper in the city of fog. I rarely like to double back, but fortunately, for those with time it seems there are endless ways to slice the LA-SF run.

Notice how the first leg of this is quite short compared to the haul to San Francisco. I guess I discovered that November is not the ideal time to be riding in the mountains, but more on that later.

John (jdgretz) was up for some weekday tooling around, so we met at a gas station before swinging by my chosen sightseeing stop: Vasquez Rocks. It gave us time to link our Senas, which made for a nice in-helmet narrated tour.


Of course, once laying eyes on the actual rock formation, I had to go up it.


From the tip, the landscape was a heightened surreal. Dark patches of shadow crawled along the scrubby hills like living creatures, mirrored by the heavy undersides of the clouds that cast them. The constant wind current pushed them along, alternately bathing me in cool diffused shadow and glowing sunlight. I would have liked to stand triumphantly at the top, but the wind was quite strong and I also would like to not die by falling off the movie picture rocks.

I followed John to our next stop, his pick this time. On quiet roads over the intercom he mentioned that his wife couldn't believe he could ramp down to my preferred speed. He said he enjoyed riding with me because I moved slower, poking around and exploring. With the Norge, he had plenty of power to haul ass back home.

Over lunch I'd noticed a disturbing patch on the radar, but was hoping to ride through it to my intended campground. What I didn't realize was that I had chosen a camp at altitude where temperatures would drop to near freezing at night, and backup camp was past a twisty mountain road. It would have been a beautiful ride among the pines, but somewhere along I-5 the drizzle began. Temperatures plummeted as we climbed, and on my borrowed setup I was dreadfully lacking in rain gear. John was equipped for all weather and offered to turn around, but I was determined to remain chipper – it's only one wet day. Around Gorman, the skies truly opened up and poured. John's voice crackled in the intercom.

"Have you run out of your fun meter yet?"

Temperatures were in the single digits now, and rain was seeping in between my zippers. I pulled into an overhang by a closed antique store, defeated. Shaking with cold, I called the closest Econolodge and bade farewell to John. Let it me known, it was the first time I'd ever emergency checked into a motel.


Being cold on a ride creeps up on you, because you can operate a bike so you think you're okay. I didn't realize how bad it was until I couldn't hold the pen to sign my name for my card. My first task after unloading the bike was to stumble into the restaurant next door, seeking a cup to heat up water with the in-room microwave for tea. After downing the entire cup, I took a long, hot shower. Countless cold rides in New England had already taught me the pain of returning from numbness and subsequent delirium, but this time I felt particularly leaden. My warmest layer was a cotton hoody, which was still damp. I made more tea, with whiskey this time. There was nothing open in this town, but they had wifi so I called Fred from under the covers – emotional warmth. It might've been around 8pm when I fell asleep, just barely convinced that the rumbles of 18-wheelers along I-5 resembled crashing ocean waves.


Now that I've put about 1000 miles on the Gel Solo Sport Seat, a brief review: the gel material is comfortable, but not noticeably more so than my sheepskin, or what I've tried of an Airhawk. The extra inch or so of seat space for sliding was wasted for a shorty like me, and the claimed inch lower profile just seems to match my stock 2009 seat (after 2015 the seats were made taller for more storage space). Mostly, between the rounded Vespa topcase and solo seat, I missed having a flat surface to temporarily place my beverage upon while I geared up – a job the stock passenger seat was quite adequate for, when not occupied with a passenger who could hold my coffee anyway. I suppose it could be nice for looks or a tall person who always wants to ride alone, but not for me for the price.


On my first trip along the Pacific Coast Highway, I'd pulled off on Nacimiento-Fergusson Road to make camp. I noticed a lake by the same name on the map, and a small road that snaked between it and its neighboring lake, appropriately named Interlake Road. It turned out to be a lonely but refreshing and curvy patch of green in the desert, but blink and you'll miss it. Alas, nowhere to pull over for photos until the ruins of Dutton Hotel in Jolon, CA.

The brief scenic pause fed into a determined haul up CA-101, and the familiar waypoints along Route 1 – Half Moon Bay, Pacifica, Daly City. 402 miles later, I gratefully rolled up to Pete's apartment, took a hot shower, and had some belly-warming miso soup before falling into blissful slumber. I can't express how much I appreciate that he opened his home to me as a launchpad.

The next few days would be occupied with recovery, food, blogging, and one fashion party.

One of the best things about being in the city – the heart of a city and not city-adjacent – is how quickly you can make plans for an unending parade of establishments. Moose suggested a breakfast spot he loved for braised duck leg wonton noodle soup, and I met him there in 15 minutes. It reminded me of places I frequented in New York City, when I'd just started college and missed Hong Kong.


In the same on-the-fly vein, it turned out the coffee shop I'd picked to work for the day, Cafe Enchante, was in Moose's old neighborhood. Not half an hour later, he was off work and met me there. When I'd reached a good stopping point on my work, we paid a visit to his old local tiki bar, Trad'r Sam (damn scooterists love tiki, and I'm trying to find a middle ground but...just give me a daiquiri, I guess). The compactness of the city is both fantastic and baffling; how is it that I can make plans for 15 minutes away, but people still suffer from flakiness and it takes half an hour to go 2 miles?


Pete, being of fancy-man stock, was included with high end fashion folk at the Emporio Armani Vespa 946 line launch party (he was responsible for the two designer bikes on the floor, after all). Somehow, I snuck in with him to score some free drinks and try on gloves to laugh at their price tag. Accustomed to having a seat on any Vespa I see in Pete's showroom, I struck a pose on their floor model before realizing that the center stand was barely attached. Security very nearly threw me off the $10.5k bike. Pay no heed to the French 75, guys, I do this all the time!

Honestly though, thanks goes out once again to Pete at Vespa SF, for lending me Endy2 for another California tour.

When I was working in LA, I counted the days until I could smell the cool San Francisco mornings again. The morning of my flight back east, I woke up before the alarm with anticipation. Perhaps there will always be a part of me looking forward to the next place, a counterbalance to the act of riding which works excellently to keep me in the moment. Pete delivered me to the airport as always, but this time my legs dangled awkwardly off the hump of the solo seat. I'll miss the brisk chill of San Francisco, but my bike was waiting for me in Richmond, where there's a rally with a boy.
Posted by 250cc Superhero at 8:25 PM