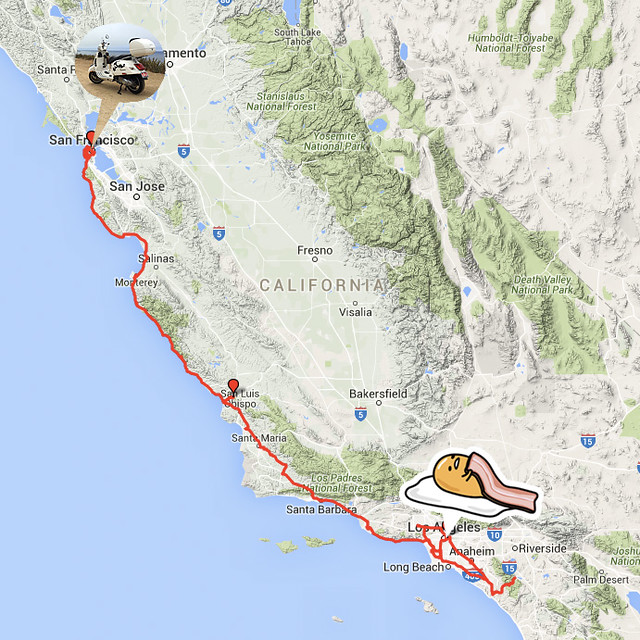 Another elaborate logistical dance of airplanes, friends, work, and borrowing Pete's bike was about to go down – you know, the regular drill now. By the end of it, I believe I'd be responsible for about 3/4 of the mileage on Endy2. I count myself extraordinarily fortunate to be able to get to know the Pacific Coast Highway so well. All in the name of working for a lazy egg... Or just a great excuse to visit friends in California!


On the list of things I wanted to take care of in town, Pete mentioned he knew a fantastic leather worker who could repair (read: replace) the pockets of my riding jacket that were ruined beyond my ability – to be expected after a couple years everyday use. It was a quick scoot to Johnson Leather on Polk, and they even gave me a loaner jacket while they worked on mine.

With so many familiar faces, being back in the city was a bit like coming home. Between catching up with friends like Lisa and Ivan, getting a haircut, repairing things, going for a jog up to Fort Point (mm, sea spray stinging my eyes and nose, but what a view), and making steak with Pete, of course we had another dog park birthday party to attend. We didn't throw this one, or get everyone wasted by 5pm like last time.

Remember the Cross Egypt Challenge gift certificate Matt won in raffle and gave me at Amerivespa (back in June)? It turned out I'd be working that weekend, so I passed it on to Pete. He was actually on his way to the airport a day before I headed south, and would return a day before I got back to SF – he'd be riding a rental across Egypt while I took his bike to LA, ha!


Part of the reason for installing a Sena on Pete's helmet was because this time I had a riding buddy to LA! Moose is an LA native and much of his family is still there, so he makes the haul all the time...on his custom yellow GTV. He wouldn't be able to ride the return leg with me, but I was excited to share the road south.

In addition to being a GTV long haul rider, Moose is a food industry guy who recently got into cooking directly on fire. He wanted to see how much of his cook setup could travel by scoot. I'm only too happy to volunteer to be part of this test – free-camping off a quiet road with some jerky before crawling into my sleeping bag is one thing, but this is way tastier.

A campground mixup meant I had to ride solo back into town for cash for the site, but it gave Moose time to set up his picnic-table kitchen. The fire was well on its way by the time I returned.


For so many miles, my helmet was a private, intimate space for internal wanderings and introspection, where no one judges my music or singing. With the Sena installed, it was jarring at first to have Moose's disembodied voice booming what felt like directly into my thoughts. However, it was extremely useful to be able to discuss routes on the fly, suggest lunch break options, or to share stories on boring stretches. It was like chatting with your friend in a car on a road trip, but you're both on your own bikes.

Clearly, I'd been getting accustomed to the shared headspace when, along a quiet piece of desert, I heard Moose ahead of me go, "Gah!"

Not moments later, I saw the enormous desert spider. It was at least the size of my hand, languidly crawling leg over leg across the road. It might have stood halfway up to my floorboard. Naturally, I swerved to avoid it. And filled the intercom with the girliest screaming.

Sena (and maybe I) redeemed herself, after taking CA-154 to soar over Cold Spring Canyon Arch Bridge. I remembered John (jdgretz) led me along some smaller, squiggly roads in this region, so I kept an eye out. On the map, I noticed a road full of switchbacks leading into Santa Barbara coming up on our right. At the press of the button, I asked Moose his opinion on switchbacks, and said to slow for the next turn.

N San Marcos Road turned out to be a twisty, narrow, unpainted piece of pavement the drops you from Los Padres National Forest to sea level. There were no guard rails and no traffic, we passed only a few wealthy private residences that faced the sea. With no place to pull off and the crazily angled road demanding full attention as it spilled down the mountainside, I didn't take photos, but I promise you the view of Santa Barbara as you descend the mountain is fittingly phenomenal.

Also, speaking of lunch, Moose knew of a taco place in town!

Once in LA, we met up with Moose's childhood friend and another GTS rider, Joe. The two of them were planning a Seattle trip, which meant Joe also had a Sena. We linked them up before riding to Shinsengumi in Torrance for yakitori dinner.

So, the voices in my head are multiplying.

Also, they're not always intelligible, which is how the keyword for, " Let's single file for lane sharing on the highway," became, "Tiramisu! Now!" Having intercoms for three riders had much the same chaos of herding cats, now given microphones. We made it with much hilarity, and they extended an invite for their Seattle trip. I can only imagine.

I think Moose was concerned for my wellbeing because this time Tigra and I would be staying with my manager, who is vegan. Actually, about half the team is vegan. No worries, I'll be digesting this meat for days, like a snake.


With all this company, it felt fanciful that I found myself solo for dinner again. This being LA, my first thought was a ramen bar. Last time, this led me to fantastic spicy tonkatsu. This time, a Yelp search turned up Tsujita Tsukemen Ramen, something a bit different. The menu included instructions: Dip noodles into soup until 1/3 of noodles is eaten, squeeze lime over remaining noodles, and when noodles are finished you can add sour soup wari.

It'd never crossed my mind that lime and ramen could be friends.


Midweek on my day off I quietly turned 31, my second birthday on the road. I'd made plans to meet Paul, who had finished his moto trip after we parted ways in Colorado Springs and returned to Orange County. After a beautiful ride along the Ortega Highway, I crossed town again to catch John again for a pizza party with LA Bikers at Bas' place in Malibu. I rode 220 miles all over LA, some city, some mountain, listening to music in my helmet and spending time with friends old and new, to come back at the end of the day to FaceTime Fred from Aisha's air mattress.

A perfect way to ring in another circle around this sun.

No one else was comfortable riding on their own to pick up the repaired bike from Sherman Oaks, so I had a sweet little solo ride through LA on a rogue Gudetama scooter. I joined up with the main group just in time for lunch at Lassens. Best job ever.


According to the warnings, LA was at risk of burning, flooding, and blowing away all on the same day. Not to be dramatic, or anything.

An old Beijing highschool classmate, Kathy, lived and LA now and had reached out with an invite to a house Halloween party. I met her and her friends at their home as they prepped and we caught up, and they even loaned me a costume.

There's something amazing about appearing at a party where I know no one, and have no intentions. Something liberating, something to the tune of I Give Zero Fucks. I'm not self-promoting or networking, which seems to be de facto in this entertainment town. I'm not a sexy version of anything or a clever twist on a standard; not seeking a hookup, nor to impress, which should be abundantly clear by the readymade oversized shirt under a leather jacket with a full mask. The whole effect is only amplified by alcohol, and no, I really don't know or care about most celebrities lives.

I had a pretty good party.

Check off another round of Gudetama, time to take Pete's bike back north!
Posted by 250cc Superhero at 10:34 AM