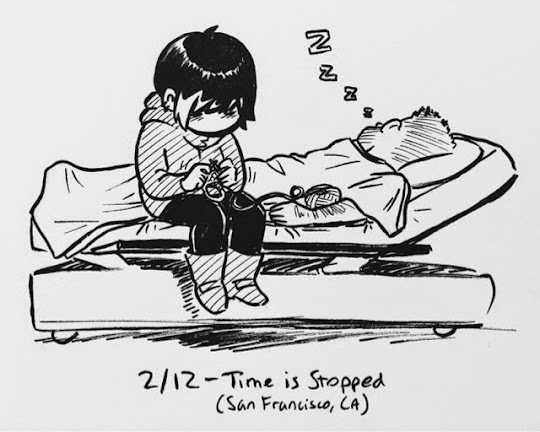 Last night as I returned from Oakland, I got a call from San Francisco General Hospital. I had to listen to the voicemail twice. Pete was in a motor accident. "He said something about the dogs," was all I could get from the social worker, before I punched in the address and sped to the hospital. I braced myself for blood, bones, even final moments. In my head I know that as a rider, risk is an unavoidable reality and accidents happen regardless of poor timing or other plans. In my heart, I was worried and pissed. We're going to ride to LA together. Please be okay.

He's stable, and was released around 2am with diagnosis: mild concussion and fractures on the right side of the face. They called him back in today for further imaging on the bruise on his brain, and a splint for a fracture in the right wrist they hadn't spotted before. I sat with him while he napped between tests, feeling like I had stolen moments from a far worse fate.
Posted by 250cc Superhero at 5:53 PM