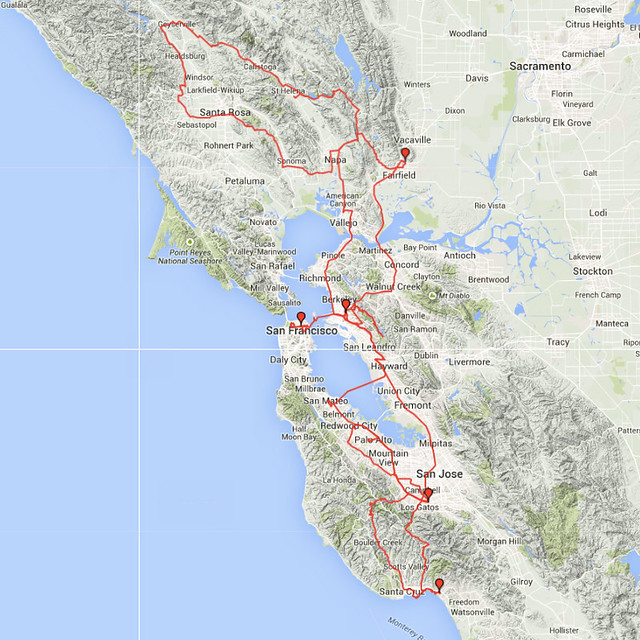 In the months to follow, I'd become so familiar with I-280, US-101, and I-580 that I mostly stopped tracking it. Actually I'm pretty sure I crossed the US without doing as much freeway riding as I have in the Bay Area. Oh well.

I did manage a few trips beyond the sprawl to meet ADVers, or see a familiar face...


The first order of business was cat-sitting while Lisa and Erik were out of town. Lyapa kept me company in their sun-filled Oakland apartment, which reminded me of my art school days – something about the high ceilings, open loft space, Lisa's watercolors taped up along the wall, and the quirks of an old building. Like their keepers, it oozed personality and coziness.

Heinold's First and Last Chance Saloon shared the waterfront with a phalanx of touristy, party-going establishments, the type accustomed to volume. Maybe it's me, but I feel like when a Ben & Jerry's moves in it's the beginning of the end. The saloon, however, is creepily real. The 1906 earthquake unsettled the foundation and they gave up trying to shore it up, opting instead to just shave off half the table and chair legs and lean into it (ha!). The bar slopes at a crazy angle, and much of the interior is original. It's a bit of an unnerving reminder from the past, of dry counties and sailors not returning. I feel like there's a Decemberist song in there somewhere.


Life settled into a string of cozy restaurants and climbing. Dmitry and I became regular partners at the rock gym, and I had a go at some aerial acrobatics (I've always wanted to try!). Days bled together, filled with the ebb and flow of work, socializing, sleep, and eat. I felt a bit like I was recreating my pattern in Providence. The riding weather was far, far better though.

Oh yeah, I had a birthday. I turned 30. I think it's supposed to be a big deal or something. Anyway, I did some trapeze at the SF Circus Center, ate some mussels, and wandered around the city with my cousin. On the day of, I scooted to Oakland to have lunch with Lisa at A16, and work at some different cafes.

It was great meeting Rod (rodr on ADV) and Lucy, and going for a ride with Joel! Super grateful they let me crash overnight too. They were unsure how many miles I typically fill a day with, and figured a roundtrip from San Jose wasn't a big deal for someone who crossed the country... Actually, my daily mileage is pretty weak (~200 miles is typical), and the scoot tires me out quickly at freeway speeds. If given the choice, I don't do much nighttime riding either. It's amazing I got this far, really...

That being said, it was fantastic riding with both of them! Rod even got some video of the ride. I credit him with the phrasing of 'goaty roads' to describe those narrow, winding, questionably paved roads common in wine country. Quiet, beautiful, and a lot of fun. Much thanks for putting that ride together, Rod!

It was lovely to ride solo again, and reminded of crossing the country instead of just doing a day ride. With Rod's suggestions, I managed to pick a 5 hour and 127 mile route between Oakland and San Jose, all on a single tank of gas. On the road though, time loses meaning and I just take the miles and match them with endurance. I don't pause long enough to ask why it works for me.

I received an invite from Jim (hdawg on ADV) to meet his family in Santa Cruz, and happily took the scenic route down there. We chatted about worldwide travel and a suitable starter bike for their older daughter, who already has her endorsement (what a family!). I'm super thankful they shared a bit of their world with me. Santa Cruz is like a little paradise, people walking around in bare feet and short shorts in November...Pah!

Yes, I found Ruckus Mike! He was headed south after his scoot to the Arctic Circle, so we met up at the classic biker spot, Alice's Restaurant. This time we sat down for food, but it was hard to find a moment to chew between all the excited chatting and stories to tell. I hadn't seen him since our brief encounter in Shady Valley, TN, but it turns out we started around the same time, and amazingly have roughly the same mileage. Routes and rides are different, but we shared reassuringly similar experiences on the rhythm of the road, small displacement style (though really, my bike is a hog compared to his). The way that some travelers go, I have this feeling our paths may intersect again in the future, and we'll both have more stories to tell.


In the coming months, I would find myself taking Skyline Blvd from San Francisco to San Jose countless times. The pattern: haul ass to the city on the freeway for the weekend, and then a quiet, leisurely Monday morning ride back through woods and mountains. Part of the reason I kept making the SF-SJ commute was...


Pete (of the food trucks and Treasure Island jaunt) very smoothly asked me out again. It just so happened I was thinking of going to the city that weekend already, for the Dirtbag Challenge. We agreed to make a weekend of it, and my stay in the Bay Area was starting to take an unexpected turn.


I would disappear for a couple weeks on a family trip, but I had plenty to think about. Work was slow, and it was clear now that I would be waiting out winter in California before the return east for that last corner (Lubec, ME). Family would soon descend upon the Bay for the holidays, which brings its own mix of required fun (I love my family, but as with many things, when critical mass is reached things can get hairy).

The soonest I would realistically set off again would be January. It was an uncomfortable place between not quite long enough to settle in, but long enough to require a somewhat settled routine...and become involved in the lives of locals.
Posted by 250cc Superhero at 6:33 PM