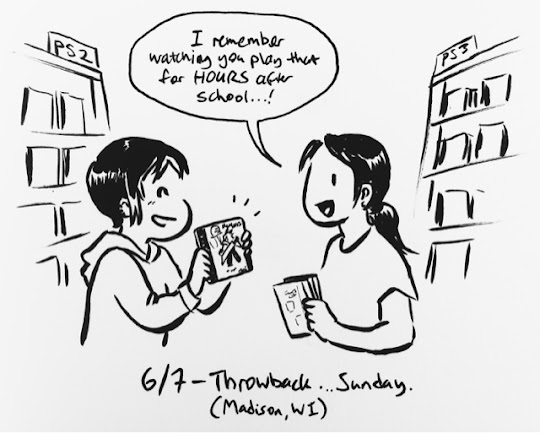 I followed Ben and Moni on shopping errands (Menard's, Target, and Pre Played: a used videogame store), and got some drawing done while thunderstorms passed outside. I couldn't help but wonder when, or if, an errand Sunday would be in my life again? Days of the week already lose meaning to a freelancers, and take on even less significance on the road. Shopping for supplies is limited to only things I can carry onboard, and without the structure of the standard 9-5 forcing you to lump your errands together on the weekends, I just pick up supplies as I go.

My sister and I took a trip down memory lane at Pre Played. It reminded me of the musings below, cut for extreme nerdry.

A little while ago I was explaining how my life sometimes feels like an RPG. I wander into towns, explore the local inns (mostly in Mexico, in the US it's too expensive and I have to research a place to stay beforehand), talk to locals (NPCs), pick up supplies (food, potions, weapon/armor upgrades), then eat and spend the night (restore HP). The next day I may explore further, or my party might move on (see World Map). Other playable characters join my party sometimes, but so far we eventually go separate ways on difference quests. Every time I explore farther, my World Map expands – maybe someday it will all be revealed. Instead of random monster battles I battle weather, road conditions, and the budget beast. I pick up skills along the way, and only occasionally I'm poisoned (damn dairy). It's hard to level up if I stay in the same place too long, but there will be times when level grinding (paying work) is necessary (poorly designed gameplay here, if you ask me).

I can only guess that those games I played in adolescence left a deep impression on my psyche, because it's startlingly easy to understand my life through the filter of a game. I only wish I could wield a sword on my bike to mow down some beasties, and gil for gas would pop out. But no, my beasties are different. Life is an infinitely more complex MMORPG, but I still want to level up. This is what drives my pursuit of martial arts, and hours at the gym. This is why I learned to ride, to camp, to read a map and start a fire. This explains everything.

The only thing lacking now is the larger quest, to save the world from a malevolent alien and her crazy half-son, or somesuch. What is my world quest?