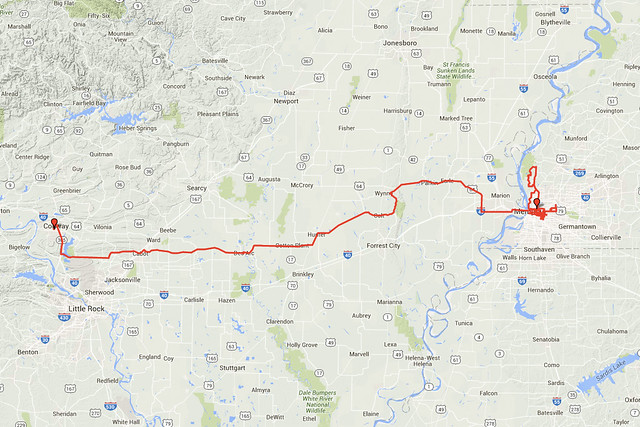 Prepare for food, scooters, and wrasslin', because that's what's happening in Memphis. I reached out to some folks at Memphis Kings SC for things to do and a place to crash, which is how I met Cassi.


I've come to enjoy the stretching and compressing of time over distance, watching as cows and horse-lands give way to Dollar Generals and Subways, but I still feel a bit of whiplash coming into town. At a gas stop in Des Arc, AR, a man drawled at me, "Tha's a naice rahd you got there, son," but maybe he calls everyone that. Soon enough the Memphis skyline was rising before me. I'm back in Tennessee!

We wasted no time at Cassi's. She single handedly runs Pink Diva Cupcakery, and I was handed a sample upon entry. It was mostly gone before she mentioned all her food was vegan – score, no dairy repercussions for me. We had a dinner date with the other Memphis Kings, so we grabbed a few cupcakes from her shop and headed out to do Memphis-y things.


Alas, Cassi's friend wasn't working in the hotel that day. Next tourist destination!

Jay led us down the kind of small forested road where moonshiners might feel at home, but I didn't come across any white lightning. Just steaks and history, and fried pies?!

Anyhow, it was a lively evening seeing these guys again (I met some of them back at Amerivespa, or was it Bandcamp?). Just in case I was in a dearth of calories, Cassi presented me with this for breakfast:

Cassi explained to me Memphis' fascination with building new convention centers, but dilemma of what to do with their old ones. Today's event had plenty of supporters for not tearing down the Coliseum. She also explained that Memphis, while not a huge city, experiences a constant stream of events – there's never a shortage of something to attend.


With the a good chunk of the Kings, we continued Memphis-ing around (right after all five of us followed Cassi for a cupcake delivery, which must have been amusing for the recipients – cupcakes delivered to your door, xoxo your local scooter gang).

The next day was frittered away at a vegan brunch with Cassi's friends, Republic Coffee for work, and the Central BBQ that eluded me before (it's pretty fantastic). Cassi and I decided that after a productive day the evening demanded homemade Bloody Marys, but there had been talk of a tornado watch.

We thought, Nahhh, Kroger is only a few miles away, we'll pick up supplies real quick and make it home in 15.


I should have known the clouds would be hanging low in precisely the direction back to Cassi's. Within minutes of pulling out of the lot, the sky turned a sickening hue of yellow. We hit a curtain of rain, and visibility dropped to just a few feet. In clearer patches, you could see sheets of falling water blow in waves across the street, making ripples in the rising inches of water. The gusts pushed the bike across the road like a marble; Cassi had a cheap 50cc, I couldn't believe she was holding it straight. The sky lit up blue with lightning, thunder cracked. We were drenched, but at least there was no hail...yet.

Back at base I changed into a borrowed bathrobe (see I do wear pink, there's just no photographic evidence of it). Cassi flipped on the news to discover we caught the edge of this:


The light from the window alternated blue and yellow for hours, but we had Netflix and a pitcher of Bloody Mary – mine soon to be garnished with about 50 pickles and olives. Does this count as having ridden through a tornado? Maybe just a tornado watch?


Thanks for the welcome, Cassi! I have a feeling I'll catch up to her, Jay, and Lettie again, but that's for later.
Posted by 250cc Superhero at 12:18 PM