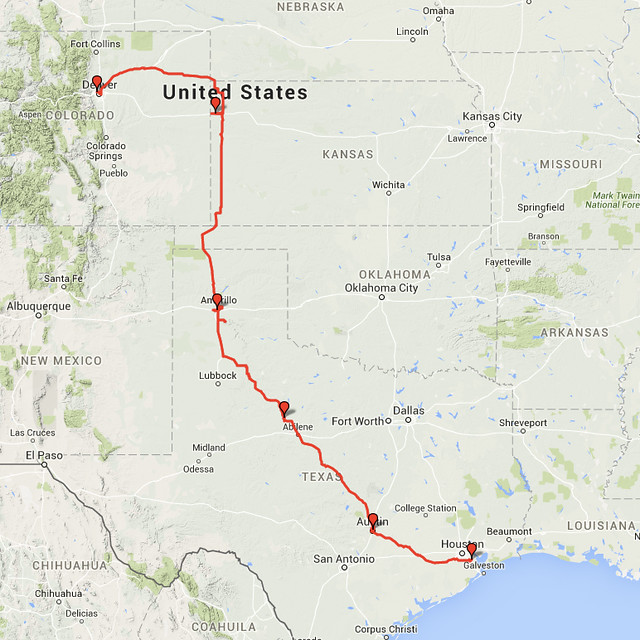 I'm making tracks! For those wondering how I chart a path, it's roughly planned around a few fixed dates, and locations where I know I can hole up for a while. In this case, I had a motorcycle event I wanted to attend in Austin, and an impending work deadline that would require a stable location, Houston.

The content of the 4 days it would take me to ride to Austin blur together in my mind – wake up, pack up camp, and point the bike down the road. The landscape was mostly vacant yet I never felt lacking; ah, the duality of the open road.


The wind was incredible for the entire journey. I was barely able to pitch my tent behind a barrier at the Travel Info Center without the air current snatching it away. Otherwise, I was actually pretty happy with camp; restrooms, free coffee in the morning, an outlet for my devices, and earplugs blocked out the noise of the 18-wheelers' generators.

Unfortunately, the morning revealed a heavy fog, and something I'm still getting used to after months in California: rain. Oh, the rider's best frenemy.


Many people have asked if I've ever been in a bad situation on my travels. Hunting for a cheap motel on the west side of Amarillo wins the distinction of being the one time I felt unsafe enough to leave. Something about the demeanor of reception, the bulletproof glass, and the few patrons I saw floating around convinced me it was worth an extra $10/night for a room by the airport, and my scooter intact when I emerged in the morning.

Yep, I do stay in motels once in a while, especially if it's bookended by free camping.


Besides, Amarillo had affordable rates...probably because there is nothing else redeeming about this city. When picking routes, it was either going to be Wichita and Oklahoma City, or some alone time with the road and the Cadillac Ranch. My social life had begun to feel like a train station recently, so I was looking forward to solitude and the quiet simplicity of riding all day and sleeping in a private space, even if it's a field, at night.

Actually, I revise my statement on Amarillo. At the Cadillacs, another traveler offered me some spray paint to tag the cars. Some chatter later and with nothing to lose, he offered that he would be at the local Hooters for dinner if I wanted to join him. I found him, and we had a pleasant evening of conversation about skydiving (his passion), travel (he's in town only tonight for a marketing gig related to skydiving), and mutual appreciation for platonic conversation at bars. One stranger reaching out can change the entire color of a local experience.

I had a spot in mind for free camping, but radar revealed a menacingly expansive orange and red blob. Town after identical town rolled by, and in Hamlin I made a mental note of the RV camp by the town center...but I felt like something more secluded. However, I was also not entirely confident GPS coordinates from the website were correct. I passed the turn off the first time, but eventually picked my way to a cleared spot along a dried lake bed. Debris was scattered around the remains of a fire pit, but I didn't feel like turning around; dusk was on my heels, with the storm shortly after.


The wind had been pushing me sideways for days now, but shortly after I pitched tent it reached new levels of ferocity. Huge clouds were pierced by lightning and announced by thunder, and I peered at their impending mass through the mesh for as long as the skies stayed up. When the drops finally became too much, I zipped close the rainfly, opened my flask of whiskey, and lay down for the night. Here's to testing my new old tent, and not getting struck by lightning or flooded, I thought hopefully. The trembling arms of the bushes next to me were illuminated in flashes, a violent shadow-play across my ceiling. The tent itself rippled and flapped for extra effect, but the sound couldn't drown out the thunder. I never would have guessed I'd come to prefer a tent in a storm over...whatever I had before. Also, I really hope no one shows up with a gun. I texted a few friends my location, still tasting whiskey on my tongue, and listened to the show until I fell asleep.


The Down Range Solo weathered the storm beautifully. I just had to pick my way back over this mess to get back on the main road...


I'll try to spare you all the photos of bikes at the Handbuilt Motorcycle Show, since there are plenty of better ones floating around. Besides, the other reason I wanted to show up was to see the Wall of Death set up in the back!


I first met Rebecca in Mitchel, SD at the Klock Werks pre-party, introduced by another wandering motorcyclist, Joe Sparrow. Rebecca also works and lives on her bike, it was great sharing our experiences and struggles over coffee. It's like there's a floating community of us.


I divided my time between a hostel and an Airbnb, but for one night I found myself homeless. It's just like the Wall of Death guys to let me crash in the drome, bonus I have a cool roommate.


Jack, another friend of the Wall, and I lent a hand to disassemble the Motor Drome. He's been staying on his best friend's couch in Austin for a few months while recovering from a BMX accident, but before that he'd been on a car wander. In the evenings, we poked around Revival Cycle's afterparty, took a ride to see the bats under the bridge, or Barton Springs, or skate parks (Jack's passion).

I had to admit, Austin seemed like a playground of food and drink, but with no one to play with...until Jack. I saw the city in a different light following him on his buddy's loaner bike. Also, Jack is a wheelie machine.


Jack was already counting down the days until he was healed up enough and ready to go to help out at the next BMX event. His loaner bike was returned, and after only a few days of getting to know him it was time to bid farewell. For travelers though, it's never really goodbye; only until next time.


I only had a day left at my Airbnb as well. After breakfast at Bacon with my adopted BMX friends, I gave Dani, Jack's friend, and Jake, still lingering from the Wall, big hugs. Next stop: Houston.
Posted by 250cc Superhero at 2:48 PM