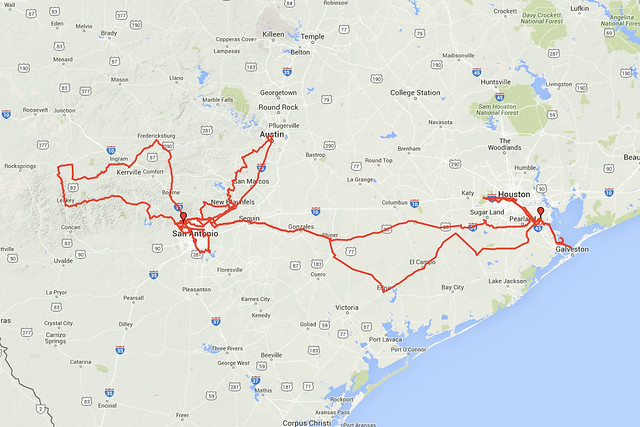 Houston has been the home of my uncle and aunt for as long as I can remember. My earliest memories of carsickness – I mean, road trips – are of taking the family car from Atlanta to visit them. In any case, I have my own two wheels now, so I was looking forward to seeing them again.


I'd forgotten that Texas gets Texas-sized weather. Shortly after I'd unloaded and the three of us took the car to the same Mexican restaurant they always take family, the skies darkened. Water fell in sheets, lightning and thunder bounced off the walls, and there was a brief power outage – but it was all theatrics while Auntie Chloris and I sipped margaritas from behind the safety of plastic palm ferns. On the news back at Yue Houston HQ, there were reports of flooding and stalled cars. It was a bit of a surprise, and I had to remind myself, You're back in the bayou, halfway to Galveston. It's low land. Later I would completely forget this, and those waters would find me, but tonight I was secure and cozy with family.

Part of the reason for hustling to Houston was because I had a book deadline to meet, and Uncle Bun and Auntie Chloris had room for me for to stay longer. Years ago, they had expected the rest of his brother's family to emigrate. When it fell through, the two of them found themselves in an enormous, mostly empty, 6-bedroom house. Since then, it's become something of a storage unit/Chinese community hostel for pretty much the rest of my family in the U.S. – they even adopted some of my parent's stuff from Atlanta when we moved to Beijing in '94.

"Space isn't a problem in Texas," was Uncle Bun's attitude, when I asked. Laid-back, young at heart, feasting-centric, they're also the only one of my uncle and aunties who chose not to have children. It cemented my adoration for them early on, which persists to this day.

They did up a little studio space with the cast-offs from a furniture set I had a kid. In many ways, people like them provide the backbone for my travels, and it would be impossible (at least very, very difficult) without them. I'm extremely grateful.


On the weekend, we visited places with names I recognized from childhood; Galveston, Kemah, all manner of BBQ...


In the same breath that I feel lucky for my good fortune in career, the adjustment back to the drafting table was an unpleasant reminder of the lifestyle that both afforded me such freedom yet I thought I could leave behind. I consumed motorcycle media, catching up on ride reports, Ted Simon's classic, Jupiter's Travels, and Somewhere Else Tomorrow. I tried to get out in the evenings with regularity, because the oppressive heat during the day explained why everyone else shuffled around in enormous air-conditioned SUVs (and never check blind spots...but anyway). Thursday, I followed my family to a ping-pong night. On a Tuesday, I rode an hour and a half across town to meet the European Motorcycle Riders – a tip I got from Fritz, a friendly guy I met at the Handbuilt Motorcycle Show. It was great hanging out and talking bikes!


Another bonus from the Handbuilt Motorcycle show was meeting Otto, from Biltwell. He sent me a care package of goodies. Thanks so much! I love the helmet and already have a spot in mind for the gas bottle.

Days settled into a routine of Hong Kong news channels in the morning (which made me nostalgic for my parents' place), hiding in air-conditioning for work, and a quiet meal with my uncle and aunt and maybe some of their friends in the evening. It was stable and comfortable...and I was terribly, terribly restless. My uncle and aunt seemed to have unlocked some sort of key to happiness, and in contrast I doubted myself. Will I one day find contentment in the routine necessary to build this kind of quiet, stable life? Is it just immaturity that I'm only at peace while moving, comfortable when uncomfortable? I'd already realized I only like to rest long enough until I'm ready to go again. The Roar kept me awake at the end of each predictable day.


Fortunately, I had the Spring Fling Scooter Rally, hosted by the Motorcycle Shop in San Antonio, to look forward to. Before the rally though, I had a few people to meet...and a Mexican Honda Cub.


Oog was tempting me with a Super Cub ride, how could I say no? These things drive so weird, but fun!

In my continual search for a place to stay, I was introduced to Debbie. She's an awesome person and a fixture in the riding community, both scooters and motorcycles. Similar to my uncle and aunt, she had expected more family to move in, and when they didn't she found herself with space for travelers. Actually, based on her history of taking in rider strays, we began jokingly calling her place Debbie's Home For Wayward Two-Wheelers. She also jokes that if she built a house it would be a one-bedroom with a four car garage. Sounds reasonable to me...

I put a call out on Facebook for anyone who might want to tool around Hill Country with me, and Kristen showed up on her GTS!


It was great getting to know Kristen! After cooping myself up to draw, it was bliss carving up the hills with new friends on bikes. I didn't even mind when it rained; Deb had a great selection of motorcycle books and I read curled up with her dog, Bacio.


It turns out Kristen is another GTS rider who has plans for a long haul. She does the Austin to San Antonio run on the regular, and I followed her once for just an evening. I ended up taking Josh's bike for a run, which I'm pretty sure hit 70mph between lights (I wasn't looking down just hanging on), and we buzzed around the city until 1am before starting the ride back. I don't usually like covering distance at night, but it was a fun change to follow Kristen. I also ticked over 40k that night. Austin is a different city with friends!

Before I returned to Houston, I shared one more sushi meal with Debbie and her motorcycle sisters. I'm going to miss her Home For Wayward Two-Wheelers.

Back in Houston, my uncle and aunt were in a flurry of packing for a vacation to Hong Kong, and I had a bit of bike work to do (as well handing in artwork). Still, there's time for hanging out with Troy (ADV troyfromtexas) before he's off on a bicycle trip in Cuba or something?!

Remember when I said I would forget that I'm in the bayou?

I thought I could outrun a storm, and dashed the entire length of Houston's sprawl to get back to Clearlake. A mere 5 miles from home base, I hit the rain... and the subsequent flooding. Hazard lights flashed from stopped cars, but I was so close. It wasn't until the second flooded section of road that I crossed, only 3.3 miles from my destination, that I thought it might be wiser to pull over and wait it out.

I found a likely looking plaza and pulled in, pointing the bike towards the covered area where a few people were already huddled. There was a dip in the parking lot I would have to cross, but it didn't seem too bad...until the water reached my floorboard and my engine went *gluglugshudderdie*. My heart froze. I coasted into a parking spot with a terrible knot in my stomach. Was my trip over in Houston?


I sat myself outside a closed pizza joint, sopping wet and cold, and debated my next move. There was no one home to rescue the bike, and I was afraid to start it...I wasn't ready to know if it didn't turn over. In the meantime, the lights from fire trucks came and went, and other stranded folks gathered.

Chris worked at the nearby military base and his car was hydrolocked. Lisa had parked hers on a median while a fireman escorted her to the plaza. With nothing to do but watch the water level rise and eventually fall, we passed getting to know each other. In that way that natural disasters bring people together, the pizza shop reopened to let us warm up and maybe buy some snacks.


When the water was finally low enough, it was Fritz that drove across town to my rescue! His all-wheel drive Ford arrived to ferry me back to the Yue outpost. Chris came along to help unload my bike. Thanks guys!


My heart eventually started beating again, when my bike started after a few coughs. I let it run for a while to hopefully steam out some water. It was 3am. I slept deeply, no Roar.


I texted everyone with some mechanical knowhow about what to check for on my bike. Mercifully, there was only a little bit of water in the oil, and everything was running fine after I wrung out the air filter. I felt like a dummy, but disaster was averted!


To celebrate, I met up with my flood buddy, Lisa, and her friend, Lauren, for a last night out in Clearlake. I think it was a college town bro kind of scene, I haven't had a guy open conversation with an offer to buy me a shot...probably since college. Or maybe it's a Texas guy thing? It was one hell of a farewell evening with these gals.


The scooter was not drowned, luggage was reorganized and more balanced, and work was all handed in. My uncle and aunt had already departed for Hong Kong. I left a small box of belongings in Texas (my contribution to the Yue Family Storage), eagerly packed up my life again, and set out for a new state. Solo again, it's time to roll!
Posted by 250cc Superhero at 8:03 PM