Gear Talk: What's in the Cooler? 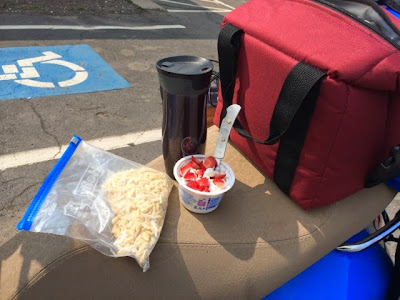 The title sounds banal, but I've always been interested in how others pack for long hauls on the road. So, I'm thinking this will be a series of posts on just gear and road logistics. Hopefully it will be useful for reference or something.


Back in Athens, GA, I bought a $10 cooler to test out carrying my own perishables. I would freeze a bottle of water or two, and started to carry leftovers and some single serving yogurt.

By the time I reached Madison, WI, carrying a small cooler was invaluable for me. It meant I didn't have to eat out all the time, which meant spending less and eating a bit better. I could take leftovers, which is nice in a country that typically serves twice as much food as I need in a single sitting. If I pulled into a campsite late at night, I wouldn't have to go out again for dinner. As long as I could find a freezer or fridge every couple days, I could carry yogurt for breakfast. Plus, it made a nice cool backrest in the heat.

Unfortunately, it was starting to leak and wouldn't last more than a day after so many miles. After seeing Davide's Polar Bear soft cooler, I found a very similar one at Wing Ding. It doesn't make my back cool like the $10 one, but with a couple frozen water bottles (also serves as backup hydration) it does a lot better at keeping my food cool for days, ha.

When I roll into a place with a stove, I pick up half a dozen eggs to boil and carry as snacks. There's typically a rotating cast of boiled eggs, snack cheese, fresh fruit, single serve yogurt, deli turkey, and leftover meals in there. It's nice to have an egg when I wake, find a coffee shop, ride 40-100 miles until the next gas stop, drink no longer scalding coffee, and have Breakfast #2: yogurt and either fresh or dehydrated fruit with nuts from bulk bins in groceries. I sort of graze on the other fruits, nuts, and cheeses at gas stops through the day, and maybe have a 'real' meal at the end when I'm not worried about food comas on the bike. That $10 was a great trial for my current 9-pack one from Softcoolers. I can't imagine eating out all the time now, it's both more affordable and healthier with this little cooler. Still a pretty comfy backrest, too.

Also, that Contigo travel mug is pretty badass. It has several battle scars from being my scooter mug for a couple years now, but that's because I toss it in the topcase or underseat. Not only does it keep my drink hot/cold for hours, it doesn't leak one bit. Now I keep it in a cotton-yarn sling I knit myself.
Posted by 250cc Superhero at 8:18 PM