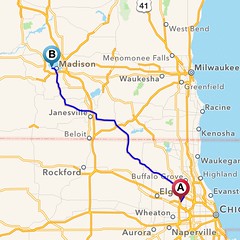 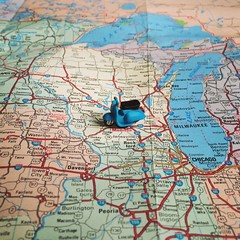 Arriving in Madison, WI was like taking a breath of air after a long dive. It's been my sister's home for about 4 years, and the first place I planned on staying for a few weeks. I was already familiar with the city from previous visits, and spending time with my sister was easy and natural. We quickly settled into a groove of coffee, takeout, kungfu movies, Friday fish frys, and of course it being Wisconsin, beer.

I gratefully took off the saddlebags and camping gear, and my scoot was invisible among all the college kid's 49cc-ers. On days I worked in the Ebling library, I just parked it with the mopeds on the sidewalk. Just don't look at the license plate.

Joe Sparrow, whom I met back in Maggie Valley, tipped me off to Wing Ding at the Alliant Center. It's a convention held by the Gold Wing Road Riders Association. It turns out I had a lot on common for touring purposes, just my wallet (and number of years riding) was smaller. Other attendees were exceptionally kind towards my relatively tiny scooter endeavor.


Bonus in Madison, the Giraffe flew in from Providence, RI for the July 4th holiday weekend.

Student life is a big thing in town, and it seemed like everyone, regardless of educational status, gathered around the Union.


Feeling all-American, the four of us took a trip to Old World Wisconsin.


Remember Stefon, from the Buffalo Trace distillery, traveling the 48 contiguous US states? He was in town for the Madison Couch Crash!

I carpooled with other Couchsurfers for a change. It was oddly communal and closed-in for this lone cub, but I had a great time.

Just for the record, for the day trip I asked my sister if she had a hat I could borrow. My options were a top hat, a One Piece straw hat, or an Indiana Jones (tm) hat. I figured I'd channel some Adam Savage and went with the felt replica. Ah, my sister, my blood.

I do enjoy posing as Spiderman. Like when I'm helping my sister shop at Target for moving supplies.

After all the fun, I proceeded to be sick for a little. Remember when I said the worst part of traveling solo is being sick or injured? My ankle was throbbing a new kind of fury from the steep hike up the Devils Lake bluffs, and I had some sort of flu. Also, I was working, which is sort of a malaise. But if I were to be sick anywhere, my sister's was the best place. Hotpot the cat napped with me during the day, and kept me company by envying my tuna salad.

Recovered and a bit antsy, I visited Mikey from the Wall of Death, in his home in Milwaukee.


Trying to get back into riding shape, I made a half-week trip to Des Moines, IA.


I'm so proud of my little sister - she's learned the fine art of throwing a killer party. I mean, for working so hard on her PhD and stuff too.


I can't remember the last time I celebrated a birthday with my sister, so I cherished the opportunity. Years ago when she was accepted into her PhD program, we took her loaded down Honda Civic from San Francisco, CA to Madison, WI. It was my first movie-classic road trip across America. We stopped by several roadside attractions along the way, and I helped her move into a tiny apartment on State St. It seemed right that I helped her move again. Now, I was rested, caught up on work, and it had been nearly a month. It was time to go, and let my sister and her boyfriend find a rhythm for their new home together.

Besides, I don't think my gut can take any more beer or dairy products. I suspect lactose intolerance might be punishable by re-education camp or at least hefty fine in this state, gotta get going before the curd police catch on.
Posted by 250cc Superhero at 9:59 PM