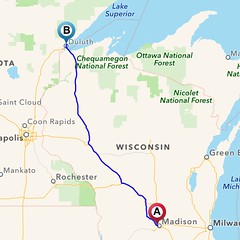 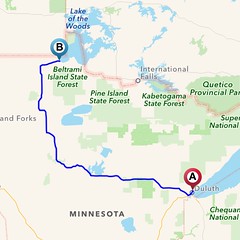 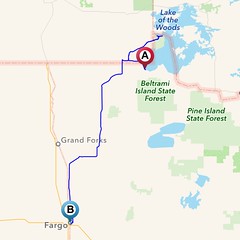 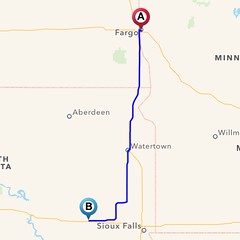 For an urbanite with a twist-n-go scoot, I sure do seem to like going to remote places. This week's journey: the unincorporated community of Angle Inlet, at the northernmost point I can drive the scooter in the contiguous US.

And of course, nothing like jumping right in for 300-ish mile days planned for 5 days straight! First stop was Duluth, MN, where I stayed with my first roller derby connection: SoKo Loco. I wanted to see the king of the Great Lakes, Lake Superior, the only one I haven't visited before. I rolled in just in time for a sunset view, and a drink at Fitgers while waiting for SoKo to return from work. She lives in a converted former orphanage with beautiful soaring ceilings. It was easy to hang out with her, we walked to a local spot and chatted life and skating and travel. Duluth is a neat little town, positioned at the tip of Superior. I noticed some adventure type bikes buzzing around, and heard there's a beautiful drive with waterfalls up the northern coast. For a few hours I debated staying an extra day to take that ride, but in the end I filed it away for the future and thanked SoKo for welcoming me to her home.


I suppose I could have taken the day to ride by Superior, but the farther I go the more apparent it is to me...I could ride forever without even leaving the US, and still not "see everything". Abandoning that idea and setting a time limit has actually been a blessing. It's worked better for me to choose a reasonable time frame, usually some compromise between personal endurance, places I don't want to miss, and a fixed time event I'd like to meet others for. Some things will have to be passed by, perhaps returned to another day.


No, my windscreen wasn't hit by a bee, or a rock. The Bee Incident of Lake Itasca went down as such: I thought a bee had gone up my sleeve, and pulled over as soon as I saw a shoulder (by the Mississippi sign above). Still straddling the scoot I started shaking out of my sleeve, and in my bug-induced anxiety I failed to notice the scooter start to tip to the right on the uneven pavement. 400lbs of scooter and gear dragged me down with it, and the guard rail split my windscreen in two and sheared the right mirror clean off. I picked up the pieces, and inspected the damage: nothing too serious, mostly just my ego.

Fortunately, I was parked at a nice looking spot. Another loaded down adventure bike pulled over to take a photo, and I took the chance to introduce myself and ask if he carried duct tape.


He didn't, but we ended chatting for a while on the shoulder. It helped distract me from my recent mishap to hear stories from another quit-my-job extended-travel-for-cheap individual. Kamden had been following the Trans-American Trail (I believe?) and then Rt 2 for almost a month at this point, couchsurfing or camping most nights. He was headed the opposite way from me, but I hope he's doing great on the road!


Somewhere between the Mississippi and the next town, I remembered the leftover Loctite plastic glue I had in my sidebag from when I fixed my bag hook and 12v plug in Madison. I removed the bungee barely holding the screen together, applied glue in the parking lot of a hardware store, and even found another patron with a short length of duct tape to spare if the glue failed. I've since removed the tape, but the glue is still holding!


It had been over a month since I last camped. Warroad had soft grass and a view of the lake, but I wasn't too excited with my RV neighbors. As the sun slowly extinguished itself in a haze, the warm incandescent glow from these boxes on wheels inspired an increasing envy in me. I caught glimpses of flatscreen TVs flickering with children's shows within, past entire miniature kitchens, and cushioned seating. They probably even had climate control, and full sized beds with real blankets. I was jealous of the idea of a comfy, more protected portable shelter, bug-free and spilling forth with warmth and light. If I could, would I have taken a trailer with dongles and doodads and down? Even as I peered covetously through the mesh bugscreen, I knew. Certainly not, not for this trip. Right now it was just me and a borrowed tent, and I wouldn't do it otherwise. At sundown, I curled up in my sleeping bag to build a trailer in my dreams. I woke with the dawn, and a crick in my neck.

And I was still eager. Today, I'd visit the northernmost place I could drive the scoot in the 48 continuous states.

Angle Inlet is part of the Northwest Angle, which is that tiny enclave of land that sticks up above the 49th parallel into Canada. This happened due to a mapmaking error (granted, it was the best map at the time), and the stipulation that the border follow the 49th parallel due west until the Lake of the Woods, where it would extend from the northwesternmost point of the lake westward to the head of the Mississippi River.

Turns out, the Mississippi headwaters are in Lake Itasca, much farther south (remember the Bee). They didn't intersect at all. In revision, surveyors were sent to find the northwesternmost point of the Lake of the Woods anyway. They would cut a line directly south until it met the 49th parallel and the border would extend westward from there. This sliced off the little piece of Minnesota land that I was now planning to visit.

The Angle is entirely supported by fishing tourism. It's accessible by boat, airplane, driving over the frozen lake in the winter, or the way I was going: crossing into Manitoba and along about 20-40 miles of unpaved road. I called ahead but couldn't get an exact number.


Actually, it's paved all the way up to Moose Lake, and then it's a few miles of hard packed dirt until the turn off for Manitoba 525, where it becomes varying degrees of packed dirt and gravel for about 20 miles. The immigration officer at the Canadian border gave me special instructions for crossing back into the Angle and a small map.

You actually drive about 8 miles past the border before coming to Jim's Corner, where you video phone in your crossing. Just pick up receiver, push the US flag button, and talk to the officer. Before leaving the Angle, you stop again and push the Canadian flag button. Here, they give you a code number which they may ask for at border patrol. There's a $1,000 fine for not having it, y'know, to discourage people from just blowing past Jim's in a cloud of dust and gravel.


Originally I wasn't sure I wanted to go out of my way to visit the Angle. I mean, I have no experience fishing, the resorts were out of my budget, and it meant a lot of dirt riding - not a scooter favorite. But I had a surprisingly fantastic time at the Angle. It's a chill little town of mostly retirees who can't imagine "doing nothing," and fishing fans. They get their fair share of adventure types (as the bartender, one of the few people closer to my age, put it) passing through too, but instead of being considered nuisances they're welcomed. Many of the people I talked to had different, exciting, full histories and picked this corner of the US - picked, not ended up. It's remote and serene, rustic but comfortable. The pace is slower, everyone had time to chat with a stranger, and there's a pervasive sense of safety and calm. When someone asks, "Where do you live?" it can be answered with, "The house next to Jim's." I'm extremely glad I took a detour and discovered a lovely, quiet community.

Two corners down! Really though, "visiting the four corners" barely describes this trip. I just needed some sort of framework. A friend once told me that anyone who says they don't make plans and just goes with the wind... is lying. This certainly applies to me. As futile as it would be to try to see everything on the way, I know myself well enough to know I'd also never be at ease with directionless meandering. The art then, my art anyway, is in choosing parameters wisely. Just enough to lay down tracks, with enough space left to fill in gaps. It's a quietly thrilling balancing act, aiming for just enough. Like 250cc, maybe.

I figured I'd give Couchsurfing another try, and found myself at a family cookout with Nate and Germaine in Fargo, ND. It turns out he's an adventurer too, and spent a year riding through South America on a dual sport! Also, a pilot. Now I really want lessons.


You may notice a lot of miles are covered, but very few photos of the ride. I've never driven through this kind of straight, flat, emptiness before. It's tamed and manicured, but it's not meant for people. It's just hundreds of miles of homogenized land for industrial scale crop production. I've hear this region described as the breadbasket of America, but I wondered if much even ends up in feed, or more as plastics or additives. It made me feel like part of a gluttonous nation. I drove through because you have to, and didn't see another car or mammal for hours at a time.

Lots and lots of bugs though. All colorfully exploded on my visor.

Back at Wing Ding, Joe Sparrow had mentioned a pre-Sturgis party at Klock Werks in Mitchell, SD. Just in time, how could I not?

The Klocks were swamped, managing a fantastic party and finding places for their out of town friends to sleep. I'm incredibly touched they welcomed me so warmly, took me in, and watched out for the weirdo little blue scooter (I felt like Gonzo in the Muppet family). I cannot say thank you enough to Brian and the whole Klock Werks crew. I met some fantastic people in Mitchell. In fact, look out for some of them at the next stop: Sturgis for Sturgis. Who knew?!
Posted by 250cc Superhero at 5:21 PM