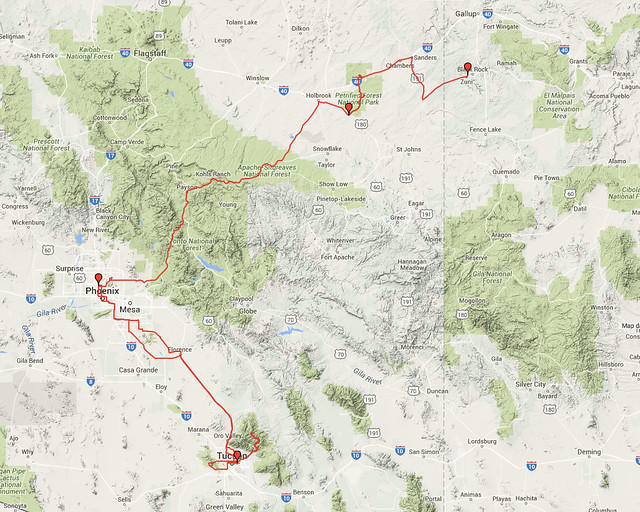 In the serendipitous way that is life sometimes, news came that Sash and Steve were staying in Tucson. Plus, a certain celebrity cooking show host, who's show sold out in RI while I was there, was touring in Tucson... I guess I'm making tracks to Tucson!

Every so often, you just have to blow your budget and buy tickets to a live show. I only wished there was a signing, I would have asked him to sign my helmet. Alton Brown's show, Feasting on Asphalt, was some of the programming playing on loop in the background while I plotted and planned my own travels. Not only did I learn to cook with Good Eats, he also explores road food in America by motorcycle? My hero. Okay, the other AB, Anthony Bourdain, too.


Most of the daytime looked much like the above. Sash, Steve, and I would camp out at a coffee shop, working on our respective works until someone's battery ran out, or someone got antsy for a ride. It's not all glitter and gold, but it's not at all a bad rhythm. Even better when I find others who share it.

Sash and Steve were staying at an extended stay hotel, which was a new one for me (I crashed on the pull out in their suite). Apparently, in addition to breakfast each morning, the hotel includes a rotating schedule of dinners for their guests to mingle and socialize during feeding. I followed them to baked potato night one evening with low expectations, but since Steve and Sash have apparently been doing this a while they fancied up our booth with craft beer and their personal supply of hot salsa. Well then.


Sash and Steve were headed to their next destination, but I'd be sharing the road with them most of the way back towards Phoenix. This is the third time we've crossed paths, but come to think of it we'd never actually ridden together until now. Ha!


Back at Waldo's, I spent the day poking around Phoenix. It's a city of expanse and straight lines, but I found a small artsy block I liked (around JoBot Coffee), and a coworking space, Co+Hoots, that was kind enough to give me a day pass. In the evening, Waldo and I had the most fiery Thai food I've ever eaten. I was off again for lands unknown in the morning. Thanks for being my home base for a while, Waldo!


On a map somewhere, I saw a road called the Trail of Ancients. It was roughly headed in the direction of Santa Fe, so obviously I took the interesting sounding road instead of I-40. I had no clue what was along it, but it worked out better that way.


I was ready to head out of town when I remembered a tamale sign I saw with an arrow. Turning around to follow the arrow ended up being the best decision I made that day. It led to a personal residence, where I sat in her kitchen eating this delicious tamale. As I packed up outside, a woman struck up a conversation over my bike. Sheryl, she introduced herself, had just bought tamales to bring home... and invited me to stay over. "There's a night dance tonight, I promise it'll be something you've never seen." This made sense, judging from the signs all over town not allowing video or photography.

I was a little nervous taking Sheryl up on her offer at first, but then she introduced me to her youngest son, JC. "Hi," he said, and then turned to Strallie, "Mom brought back another one." Whew, there's a precedent for picking up random travelers. Sheryl invited me to use their shower (much appreciated!), and then we settled at the kitchen table. She took out a loaf of traditional style bread for a snack, and I listened to her tell me about her family (her other son in Korea) and community life. The bread was freshly baked, in one of the many round, traditional style ovens that dotted everyone's yard. It's also why the town smelled so good – everything was closed because the entire town was baking or making food, including the tamales that drew my interest, for the night dances.


Sheryl took me into the old part of town for a quick tour, as well as a peek into the village center for a daytime dance. I believe she said they were mostly corn-related kachinas, but the experience is difficult to describe. I was glad for the advice they gave me – leave the phone in the car, if you have questions please save them for when we're back at home. The environment was reverent, the sounds of chanting, drumbeat, and dancing all you can hear approaching the square.

The players that stood out to me were the mudheads, who also walked among the assembled masses between dances. A mudhead stopped to give a kid one of his many red gourds, and a bow and arrow as tall as the kid, along with a dramatic speech and miming firing an arrow. Sheryl translated for me afterwards, it was hunting advice.


Sheryl invited me along for a dinner and groceries run in Gallup. In the inexplicable way that memory works, I remember JC playing me a Green Day song he liked in their SUV. At the grocery, he enlightened me on the different kachinas, taught me a few words (my brain was already too full to remember any of them), and talked about his dad's involvement in their religious community. He even mimed some of the dances in the aisles. As a family and at schools they speak Zuni, but Sheryl later expressed frustration at the slow erosion of their language.

With epic amounts of groceries picked up, we went back to deliver them to the home of a relative in town. The groceries would be for the cookout later, to feed the family members who were building a new oven on the property.

At around 8pm, the household took a nap. At 11pm, everyone woke again and returned to the village center. And I mean everyone. The entire town awake and present. Old, young, and everyone in between milled around, bundled up against the desert cold. They chatted and caught up with each other, and then slipped away to quietly peer into windows of the kivas where their brothers, uncles, fathers, and sons were dancing – only men danced. The sounds of dancing came from the six (I think?) kivas in town. I say 'sounds' because you could hear their movements, small bells or percussive pieces held and woven into the elaborate outfits would shake in time with steps, even before the low chanting reaches your ears. In the quiet of the desert, following firelight along ancient dirt roads, it makes for a most supernatural feeling.

During the day dance, I remember a moment I spotted the two other white women across the village square. Each held a red gourd, looking painfully out of place, and I wondered if they felt as if they'd fallen into some other world like I did.

Around 1am, or was it 2am – without my cell phone, I had no clue – JC was getting sleepy and the cold was biting. The family decided to turn in before the dancers finished all their necessary visits. The rest of the town was certainly dancing on, based on the lively business of several food trucks lit up along the main street. Strallie and JC had their favorite truck though, and we made a stop for some burgers and fries before bed.

I think it's the only time I've had fried food out of a truck in the wee hours of the night while completely sober.


I can never say thanks enough to Sheryl and her family, for extending such hospitality to a traveller. They patiently answered so many questions, only once or twice Strallie simply said, "It's a secret," but I see how some mystery would be protection. Tagging along to homes on the grocery run, I was touched by so many kind welcomes, feeling very much like I'd stumbled into another land. They had different customs, different struggles, and a huge cast of magical characters that everyone knew except me...and yet coexisted with modernity. This was a crash course in southwestern pueblos for me. It's like this was this hidden between the folds of the fabric of America.

Honestly, between the sheer amount of new information and interrupted sleep patterns, the entire experience was dreamlike. Without even photos to look back on, I'm not sure it happened. I want to recall the story of the flood Sheryl shared with me as we hiked to the base of the plateau, but I can't find records of it. I guess I'd flunk oral traditions.

Somehow, this is America, but completely foreign. Somehow, I was lucky enough to be spirited into that world for a day.
Posted by 250cc Superhero at 2:52 PM