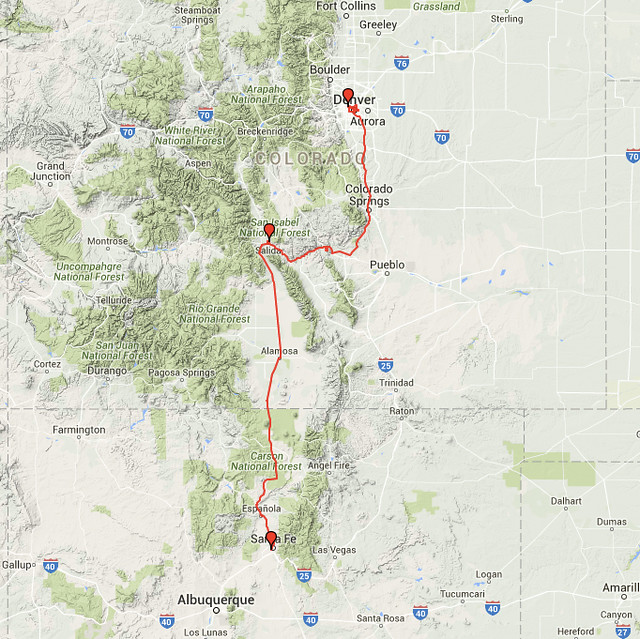 Colorado has been the most difficult riding I've done so far. I wanted to see scooter friends in Denver, did some research, and picked Salida as a waypoint. It appeared to be the best of both worlds for this early in the year; a cute town, splitting the different between the plains and what appeared to be a canyon pass instead of a high mountain pass.

The 225 miles from Santa Fe to Salida was some of the most tiring, grind-you-down, cold, windy, rainy riding I've ever done. The bulk of it was leaned into a crosswind that trapped tumbleweed – the ones you didn't have to dodge – along the fences. The roads were straight, so you were acutely aware of when the crosswind shifted into a steady headwind. I hit a dust storm early on that wasn't too bad. Then it began to rain a freezing drizzle, blown sideways. And then the land began to climb. Between the headwind, slight climb, and elevation, there were times I held my bike wide open and the needle wouldn't move above 40mph. Cars honked and passed, but I'd long lost the fine motor skills required to flip them off. My temp gauge dropped to 10 C (50 F), but I was wearing mid-weather gear and GPS said I'm only 25 miles away! If I stopped to put on gear, I was afraid I wouldn't be able to get back on the bike. The land climbed more steeply and I saw a sign for... Poncha Pass, 9,010 ft?!

I think I started cheering in my helmet on the downhill into Salida. By the time I pulled into Simple Lodge and Hostel, I slurred my name at check in and could barely hold the pen to sign. He showed me to my room and a hot shower, which I gratefully stood under for an eternity.


In the grips of the weariness of being chilled to the core and then heated again (it's a very specific feeling I've become overly familiar with), I got a knock on the door. It was the host.

"There's a guy here, says his name is Paul. He says he knows you?"

Downstairs, Paul from Santa Fe, with fresh helmet hair and pink cheeks, stood at the desk. "Steph!" he exclaimed and gave me a big hug. His head cleared over my own so my face mashed into his leather jacket, which still held the cold from outside.

"Holy shit, I can't believe you rode through that!" I couldn't hide that I was somewhat impressed. I didn't actually think he would follow me. He was a new rider, only a month into his license.

"I can't believe you rode through that, on the scooter! You hit the dust storm? And the rain? And wind?" We laughed, reliving the absurdness of us both being there, and I released him so he could settle in and take a hot shower.


When Paul emerged (human again, I know that feeling), we joined the host and another hitchhiker, Greg (I'm sorry, that may be misremembered!), for $.50 wing night at Moonlight Pizza. A family was playing in the common area back at the hostel, but Paul and I turned in early. I don't know about him, but the weariness of cold got into my bones.


Another town, another cafe. At the hostel, Paul played with the guitar in spite of not knowing how to play. We both needed rest. It was the low season, so the host comped us another night...road magic!


Before I knew it, the Rockies were behind me.

At a gas station in Colorado Springs, we exchanged farewells. Paul was going to meet an old friend, I would continue to Denver. If things were different, he said he might continue with me. I didn't know until later, but Paul said I changed the way he traveled; he rides slower now. And he's keeping the bike (as opposed to selling when finished with the trip). Guess my work here is done!

A couple hours later, I rolled into the home of Ambra in Denver, CO. I knew it was the right place when I saw this scooter in front...


I had just a moment to unload, then Jon came around to hit up First Friday Art Walk. Ambra was sporting some DOT approved fishnets for the chilly ride, but we quickly filled up with gallery wine for warmth.


It was like a scooter rally of three, tearing around Denver with Jon and Ambra. We wandered in and out of galleries, vintage shops, and other art spaces before finally finding ourselves at late-night spot, Chubbys. Jon suggested I try the chicharones burrito. Fries and chili are also in this burrito. What have you done to this burrito. Obviously, I went for it.

We tossed our tortilla-wrapped hot gut bombs under the seat, but when Ambra kicked her bike... Nothing.

An hour and a million kicks with various combinations of fuel and choke later, Jon desperately started offering passers-by free scooter kicks. Nothing. At least the burritos were still warm enough to devour onsite.


In Salida, it seemed the average guy was a rough, ruggedly tan, flanneled character sporting varying degrees of untrimmed beard. In Denver, the trend shifted back towards clean and crisp urbanite. I refer to cities like this as having 'critical mass' – enough people with city lifestyle demands to sustain, well, all the metropolitan things one might like to find in a city. Art walks, boutique shops, diversity in restaurants, happy hours, brunches and such.

Speaking of brunch, I hope Ambra doesn't mind me mentioning that she was going through some relationship strife and Sunday morning we found ourselves at a bottomless mimosas spot. I was content to listen and let the hours pass by, sipping whatever was in front of me... little did I know, the bar keeps count of your drinks and prints it on your receipt, even if the total is a flat $10.

The receipt came back for 21 mimosas. Dayum. At least I know I'm topped up on vitamin C.

Obviously, the next course of action was to work on scooters. I was due for an oil change (completed successfully) and Ambra wanted to change the rear tire of one of her bikes (not quite so completed, the chair lift was working out but she didn't have other tools. However, she does have a nice dress).

It was fun being back in a city, tagging along while Ambra shopped for housewarming gifts, and hitting up places like Sputnik (vegan options: definitely in the city). Between her series 2 Lambretta and Jon helping to break in the Series 3, I had a feeling like it was our own personal mini-rally, sequel to Las Vegas. Thanks for showing me the city, guys!
Posted by 250cc Superhero at 12:57 PM