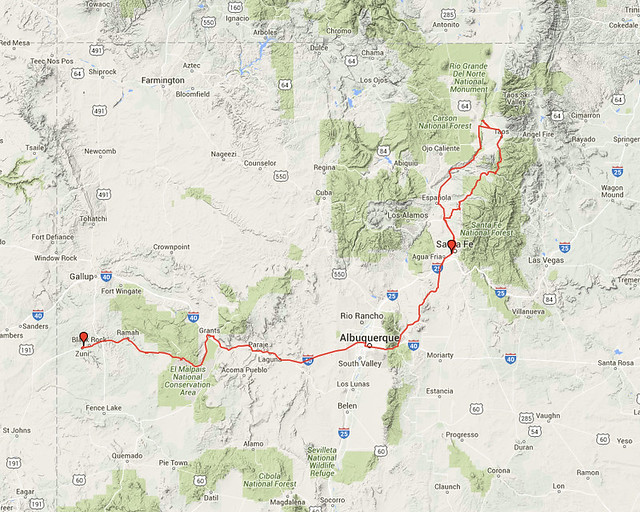 But now, the vastness of the desert stretched out before me like the ocean. I passed through Albuquerque with just a stop for a burrito with green chile sauce. My sights are set on Santa Fe.

El Morro National Monument is a big sandstone feature with an oasis at the bottom. Situated about halfway between ancient towns along an east-west trail, it's been used as a watering hole for centuries by native people, Spaniards, and other European travelers. I certainly felt like it was a natural spot for a break, this thing is hard to miss on the horizon.

The ranger suggested two hikes – one to the water, where people have carved names into the wall (hundred year old graffiti!), or another up to the ruins at the top of the mesa.


I mostly followed Historic Route 66, crossing under I-40 a few times between pueblos, before finally joining it to Albuquerque. Somewhere along the way (Anzac, NM?), the landscape turned to huge, heaving piles of old molten lava. It was like the earth erupted, you could see blackened rocks between the cracks. The road became narrow, and began ducking and weaving between the volcanic hills. Cool, surprise lava bed! But difficult to explore or photograph, there was nowhere to pull off.

Hostels have become some of my favorite places to stay when I want a bed, and to meet other travelers. The Santa Fe International Hostel is what I imagine the quintessential hostel experience in America to be like. There were plenty of characters, despite being very clearly off-season – I had an entire six-bunk dorm room to myself the first couple nights. Some of the people who stayed there booked rooms for longer while working, in transition, fixing up a vehicle, or otherwise working on life. Others passed through, like myself. The owner, a greyed, crazy-haired gentlemen, seemed just the sort to take in strays. He floated around the worn Santa Fe style clay and brick halls, inviting us to help eat the piles and piles of food in the kitchen that are donated each week from the local Trader Joe's and Whole Foods Market. I never went hungry; actually, I had to make a point of going out.

It's also my first time staying in a hostel with a chore system for guests. My sleeping schedule was still set on Zuni time though, so I was up early and done wiping down various surfaces by 8am.


When I finally tore myself away from the commercial size coffee pot and wifi, I nearly fell over pulling out of the hostel. Santa Fe is located at 7,199 ft above sea level, and even without luggage my bike wasn't accelerating out of a turn quite like at sea level. Whoops.

In other fun news, I discovered a spot in the steering that would catch (by 'discover' I mean nearly fell over). I probably destroyed the freshly repacked bearings from San Francisco by taking it through Baja. Whoops again.

The center of town was full of the knick-knack type shops that weren't interesting to me, but I wrote a few postcards from the square and headed to the artsy street, Canyon Road.

In the evening, I spotted another RI plate in the hostel lot. Rhode Islanders have a tendency to always come back, I've been told it's the state with the highest retention rate in the US. Although this is unverified, it's easy to believe when you're there. So, I commented that he must be really, really lost. We ended up banding up with another group of road trippers, all roughly my age, to hit Second Street Brewery. I followed them to their local friend's house afterwards for grilling and more drinks.

At some point, I looked up to realize I was in a house surrounded by people I met only hours ago, chopping green chiles and sipping apple brandy by the fire. Where did my introvert go? This party was just passing through, one stop on a longer party-party road trip.


In the morning, I witnessed a tearful goodbye between staff as the owner of this van departed, after a several month stay at the hostel doing repairs. It seems like everyone here is a wanderer, the manager bounces between work at various hostels, a hitchhiker just pulled in, and hey is that a green Versys parked in the lot now?

I figured it'd be nice to have a soak in a free, clothing optional hot spring after lunching in Taos, but when I got there the river level was too high. It washed out much of the spring, and water temperatures were barely above a lukewarm bath. Also, there was a family playing loudly there.

Another couple joined me in the 'quiet corner' until the family retreated up the path. As soon as they were out of earshot, the man exclaimed, "Finally!" undressed, and slid into the water naked. I was a little too cold for that, but enjoyed chatting with them and hearing RV travel stories. They loved this area and she worked in internet marketing, for freedom to travel as well.


Upon return to the hostel, I met the owner of the Versys, the hitchhiker he followed to Santa Fe, and my new roommate living out of her Volvo.


What followed was a bit of a whirlwind. For reasons that I'm going to blame on altitude-impaired judgement, our cheapskate party decided to purchase a bottle of Wild Turkey 101 on our walk back to the hostel. It was a clear night, comfortable enough to sit in the courtyard among the blooming cherry blossoms, drink, smoke, and talk travel.

I still feel it's serendipitous for me to find myself in the company of fellow travelers, whether by foot or car. In explaining this, and sharing other small miracles on the road, I remembered a phrase from the book, Breaking the Limit, by Karen Larsen. I've since given the book away, because it was a hardback that Giraffe Tim picked up for $.10 at a book sale and gave to me with all my available onboard storage, so here's my attempt to paraphrase.

She refers to 'road magic' as the luck you have when you need something, and a series of seemingly unrelated events lead up to that something finding its way to you, often just in the nick of time. Perhaps you break down, and the next car that drives by is a truck that hauls you to the next shop, offers you dinner, and an overnight stay, just as thunderheads gather. Danny mentioned some of his moments, being stuck out in the rain trying to hitchhike, and having something fortuitous happen or discovering something he would have otherwise missed. Actually, I'm beginning to use road magic to describe any lucky happenstance that could only have been possible if one or several unrelated events leading up to it occurred, not necessarily spurred by misfortune. Road magic is when the stars align on the road. Like stopping for tamales at just the same time as Sheryl.

Anyhow, we put some hurt on that bottle of 101. That cherry-like aftertaste will probably always make me think of Santa Fe.


In the morning, Paul and Danny fixed an enormous frittata for breakfast, with many, many chiles (it was a good wakeup!). It seemed we would all be going separate ways; Danny was aiming for Albuquerque, Jesse making her way to Austin to meet friends, and I was going to Colorado. Only Paul was undecided on his plans, east or north. I told him I was aiming for the hostel in Salida, CO, if he wanted to meet me there. With a belly full of eggs and fire, I rolled out.

Somehow, my social circle had become like a train station. Santa Fe has been most like what I imagine traveling as a single young person would be like, for whatever that's worth.
Posted by 250cc Superhero at 4:16 PM