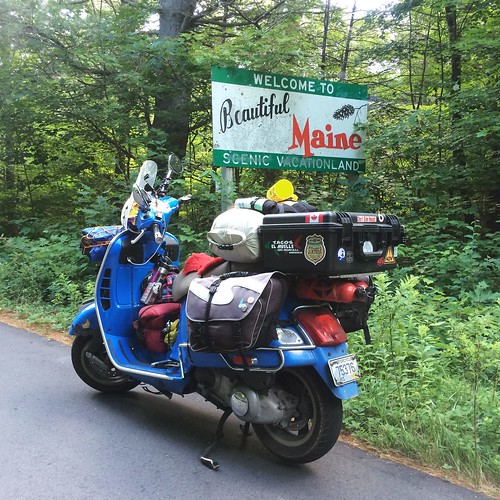 The Vespa GTS 250/300 is pretty cushy for touring straight out of the crate, but here are some small additions that go the distance. I run stock inside, so really this is just a rundown of some luggage and electronic accessories I put on there.

The often-asked, long-awaited breakdown beyond the cut.

I use my phone for navigation, GPS tracking, and music. After a windscreen, this was the first thing I installed. The pieces: RAM X-Grip attached to a 3 inch arm, with a U-bolt base around my mirror stem (~$45 total).

I also hang a little cheapo touchscreen pen there because my winter gloves aren't touchscreen capable. And a lucky cat with peppers...because lucky.

For charging above mentioned phone. Scooterwest sells a plug and play left knee pad power plug for GT/GTS/GTV for about $50. This would be the easiest way! Before I knew it was available, I enlisted the help of a friend with wires and diodes lying around to follow Modern Vespa tutorial on installing a turn signal beeper and 12v power outlet. My outlet is always on because it's wired to the alarm, while the Scooterwest version is on only when the ignition is switched to on. However, my electric work is not as tidy, so there's that. The turn signal beeper has grown on me, but I can go without the sound of a miniature truck backing up when I'm stuck at a left turn.

The 2015 and later GTSes have a USB port inside the glove compartment. It's easier to DIY wire to the knee pad, but if you want to use the Scooterwest kit you need an additional kit.

I picked up a CB2 Wide Crampbuster ($7~10) right after the phone holster. It's cheap for the extended comfort it provides, and easy to carry if borrowing other bikes. Merely rest your palm on the plastic cradle and let the weight of your hand hold the throttle open. Flip it the other way to disengage. Ahhhh.

The black plastic Throttle Assist (~$20) is a bit newer. It presses up against the brake lever to hold the throttle open without your hand. I was nervous about this assist at first, but once you're used to being able to take your hands off the bars... Fun for the plains, or just plain fun?!

I also swapped out the stock bar end weights for 500g bar end weights, to help dampen the front end wobble notorious on GTSes when you load the back.


The above would be the first things I put on a GTS. The following are bonus rounds!

The cheapest, easiest modification to increase carrying capacity. Not everyone likes to block the canyon, but when living on the bike, leave no space unused! A couple small bungee cables hold my soft cooler here.

Note, if you block the canyon like I do, it's easier to get off the bike after a long ride with the addition of a side stand. I got by without it until Vespa SF installed one for me. It's not stable to leave it on the side stand, but it's much less likely to tip over when I'm attempting to step off the bike with numb legs, thanks guys!

If you've got money to spend, I've seen Classic Racks on other bikes and they look lovely. 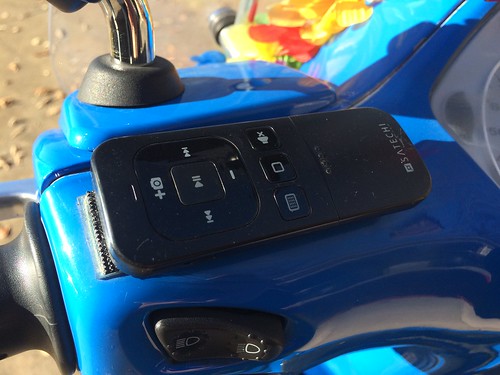 Maybe it's different for a different bike, but I like music when riding this one. The Satechi Media Remote (~$35) has a battery life that actually lives up to its claim of about 6 months, and lets me control music by rocking my left hand slightly without fully removing it from the bars. Also, it works as a remote shutter. I attached it with adhesive Velcro (~$5) on the remote side, and VHB tape (~$11) on the headset side after plain adhesive eventually failed. This way, I can pull it off in the rain or when I'm leaving the bike unattended. 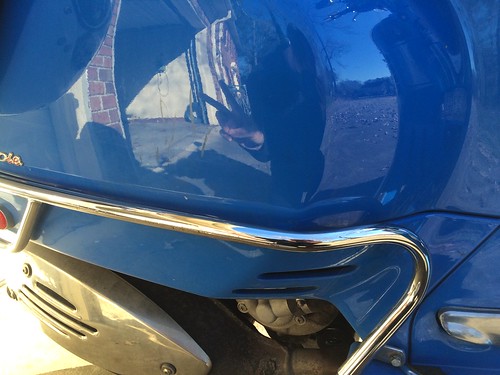 Not really necessary, just nice as additional tie down points. Body work is expensive and inconvenient for a Vespa (darn monocoque frame), this insurance policy is cheap by comparison. I have these from Scooterwest (~$223) because they hug the bike closer than the Vespa brand ones, but they're still bolted to the frame and not the plastic. The bike has tipped over on both sides, and the bars have proven themselves.

My side bags are attached to the grab rail and to the cowl protecters. Unfortunately, I don't remember who made my bags, only that they were cheap and came from The Internet. They're faded and fraying in some places, but have held up so far.

The stock nylon bag hook is strong, but I overload mine mercilessly in my quest for space. The bottom hinge broke in a right-hand side fall. An aluminum bag hook (~$65) is unlikely to break except with excessive, direct, blunt force trauma. Also, it feels luxuriously solid in the hand. Ride on.

Sing praises for my Pelican iM2450 storm case! The standard round-shaped topcases are meant to hold helmets, the rectangular shape of the Pelican is much more useful for me. Not only is it a better shape for my portable studio, the flat surface on top is the perfect height for a breakfast bar (or just a bar), or for strapping more stuff on top.

Vespa SF installed an original top case rear rack. Dave (DSM8) banged a piece of scrap aluminum into shape for a lightweight mount. Six holes were used; two for short bolts to secure the plate to the case in corners, three were added to the rear rack and sandwiched the plate between case and rack, and one big bolt went through the case and plate to the existing threaded center hole in the rear rack. Add washers and lock nuts.

A little insurance for the desert, and fancier than the gallon jerry can I carried for a while. I keep a small plastic bottle in my glove compartment for Seafoam fuel stabilizer, which I add whenever I replenish the fuel bottles. East of the Mississippi, I burn the fuel and ride around with these empty, but next time I head west...

This fancy little plastic piece is a holster for my heated gloves temperature controller! My friend took measurements from the plastic clip on my Tour Master Synergy single rheostat controller (~$35), and 3D printed a piece that I could bolt to the knee pad.

The temp controller works with the Gerbings G3 heated gloves, my winter gloves. They get toasty quick!

More luggage options. I needed to redistribute weight towards the front to reduce wobble, so Vespa SF threw on a Vespa original front rack. Thanks again, guys, now I can carry so much stuff and people can tell me I have a nice rack! 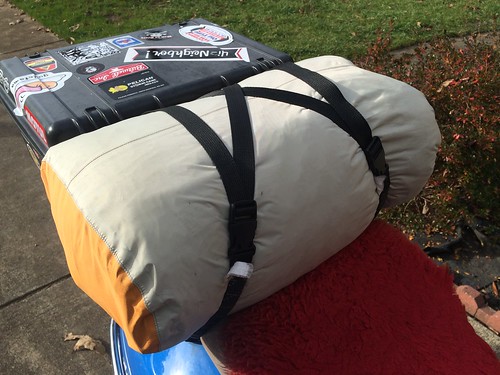 Super handy product, like bungee nets and cables. ROK Straps (~$21) allow for quicker on-and-off without fussing with hooks. I like it for attaching things to the passenger seat, since it has to be removed and flipped up to refuel.

I should probably mention that I also carry a tubeless tire kit (worm style plugs) and tools in the glove compartment or under the seat.

My pack has slowly changed over time, but that's just about everything I've done to my bike. It's been settled in this arrangement for about a year now. If I bought a proper GPS unit, I may consider threading the power supply up through the headset to poke out from under the left mirror stem gasket (an arrangement I noticed on Lostboater Ken's scoot).

If I were making any higher budget performance changes, I would consider improved suspension for carrying all this stuff!
Posted by 250cc Superhero at 9:22 AM