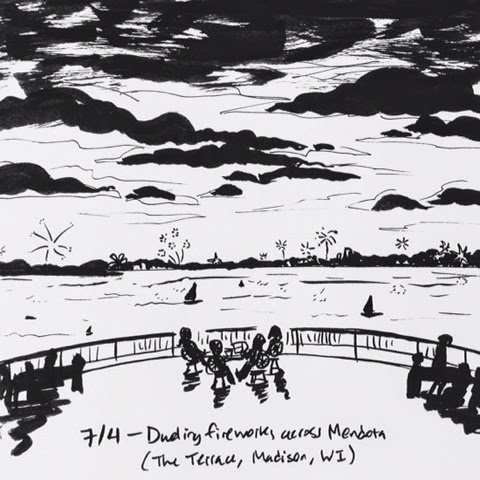 Had a lovely evening watching competing lakeside neighborhood's fireworks displays, over a couple pitchers of beer with my sister, Ben, and the Giraffe (flew in for the weekend).

Also, caught up with Joe, whom I met in Maggie Valley. He was working at the Klock Werks booth at Wing Ding. He had suggested checking out the show, and it was great to meet the other Klock Werks people.

On the way to the Alliant Center, I spotted a train of three baggers and a trike off to the side of the road, asking for directions. I pulled up and asked if they were going to the show, which they were. I said I was just there yesterday and know the way. The back guy honked to his buddies and waved me forward, and the little blue scoot lead the way to the convention center.

The guy in front had a fat cigar pinched between his lips as he rode. At a light, he took it out to ask, "So, ready to get you a Goldwing?" I laughed and took off at the light change. It was a nice little impromptu ride over the lake.