Parkersburg WV, Some Ohio, and All The Bourbon Time. June 22-26. 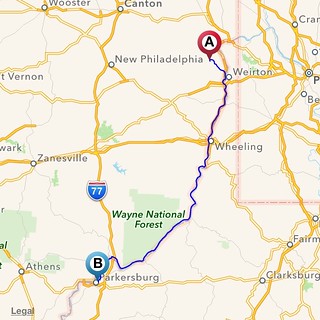 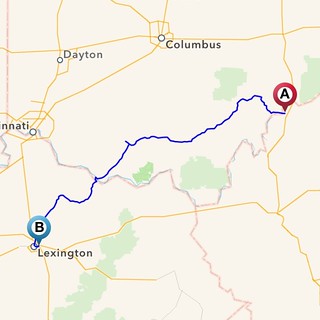 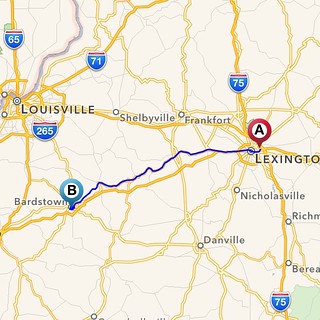 As the song lyric goes, you don't have to go home, but you can't stay here. The time had come again: everyone else goes home, but I keep on going. If there was one thing that would keep me in place, it would be so I could stop saying quite so many goodbyes.

I said a heartfelt thanks to Davide for riding with me, and felt a pang as he punched Virginia into his GPS. Forget hangovers, rally withdrawal was setting in. Thankfully, Matt and Ali had graciously invited me to stay with them a night in Parkersburg, VW (Ali, CORSette winner of past, and yes, the very same Matt who owned the Stella... incredible depths of graciousness reside within).

It was a short, pleasant ride to their home - a merciful contrast with the usual multi-day rides home from rallies in the past. After some local touring around Marietta, OH, courtesy of Matt, we just hung out in the garage admiring scoots. An early evening for us both.

Matt had mentioned a ride called the "Triple Nickel", the Dragon of Ohio. He didn't need to work until later in the morning the next day, so he could ride it with me and led the way!

It's no Dragon, but it was a lot of fun and very pretty. This is not what I was led to believe Ohio looked like, but I was happy for the ride and riding company.

So now I'm really on my own again. I picked the squiggliest line on the map, and aimed for bourbon. Every so often I still looked in my side mirror for the Partybike's headlights.


Matt had taken me to some of the native American mounds in their neighborhood. It turns out Serpent Mound, the largest serpent effigy, was right on my route. The day after solstice, I stopped for a break.

As I got into Kentucky, the bits of scenery and buildings started looking kind of like that episode of X-Files, Home. I figured they won't expect a scoot to be able to make such a speedy getaway though. Some of my favorite roads were the unmarked empty ones. A bit of tree cover, easy curves, so peaceful... nobody told me Kentucky has beautiful riding.

The next few days, I'd be staying with the Giraffe's sister and her husband, Judi and Art, in Lexington, KY. They're such cool low-key people, I completely forgot to take photos. Art is an avid rock climber, and if I had been there over a weekend and didn't have a sprained ankle, I would have loved to go to Red River Gorge with him (he goes every week!). It's on the list for another day. I guess this trip will just have to be all about the bourbon.


The hard hat tour at Buffalo Trace was already full that day, but I stuck around as 1:30pm rolled by and managed to sneak into some cancelled spots. Yay, guess I'm doing some walking/limping anyway!

I've tasted a few whiskeys straight from the still now, but they did a neat thing on this tour. They ask you to put some whiskey from the tap on your hands, rub them together, and cup them around your face. You can smell the corn and malt this way. Also, now you can operate on open wounds, and everything you touch is deliciously corny.


I followed Stephon to tour the capital building (oh right, Frankfort is the capital of Kentucky), chatting about our traveling experiences around the US. He's actually going to be in Madison, WI, next month for a Couch Crash...hmm...


Tour no. 2: Town Branch, local to Lexington, because it was a passing thunderstorm and showers kind of day. The tour was a bit odd because it was split into the brewery first, with its tasting, and then the distillery, with its tasting. However, I've now acquired a taste for bourbon barrel aged beer. Probably because it's like bourbon, but wrapped around a beer. For when you want to drink a whole glass of something that tastes like bourbon but isn't a cocktail.


I poked around Transylvania park for a bit, and chatted with another local, Phil, at Common Ground Coffee, waiting out the rain.


A couple guys struck up a conversation over my riding gear at Talbott Tavern, and mentioned they were staying at a great campground down the street. I went to check it out, and it's barely stumbling distance away from the Heaven Hills distilleries. Done and done.


My tour guide was a fantastic lady, five foot nuthin', who also works as a school bus driver. The way she described her summer, "During the school year they keep me behind the desk 'cause I have to drive the kids, but over summer I can give tours and drink on the job."

Enough touring, on to the tasting! I found a local bar, and befriended the keeper. It may have been only 4pm. I ended up staying and tasting the local spirits until just before dark.


As I've said before, I'm an urbanite at heart. While I enjoy the sense of self-sufficiency that comes from being able to carry a shelter with me, if the price was the same I would choose four walls, no bugs, and climate control. But hey, sometimes you need to leave your comfort zone. So far, I've learned the depths of my exhaust-and-espresso-fueled urbanity, but I've also picked up a few things that are perhaps unique to exposing yourself to nature. Like scooters and motorcycles (look great on green). Stars, campfires, and company. Bourbon, level ground, and falling into my Thermarest at 10pm.
Posted by 250cc Superhero at 9:03 PM