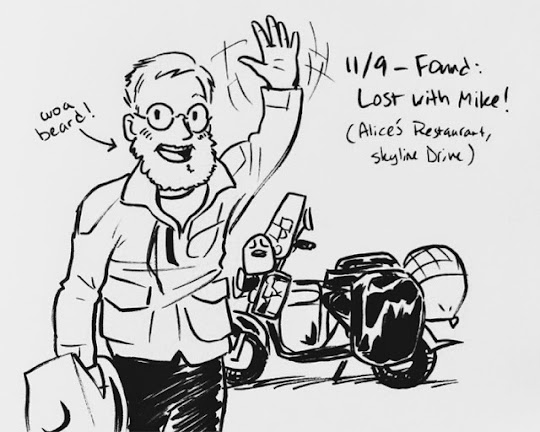 Mike, waving enthusiastically, was easy to pick out from the forest of bikes in front of Alice's Restaurant. Background story: I ran into him several months ago in Shady Valley, TN, and kept in touch though we were going separate ways. He was headed to the Arctic Circle on his 50cc Ruckus, I was on a faster track across the Midwest. We finally caught up as he's passing through the Bay Area, and eagerly exchanged stories over lunch. Stories continue to spill out into the parking lot, where many passerby paused to ask him about his proudly stickered scoot.

For me, there was an element of relief to share insights with another person about moving through the world solo on another 'underboner.' As it turned out, Mike and I started our journeys at roughly the same time (May 5th for me, May 8th for him) and our mileage is also similar (20k vs my 19k). Are we also driven by similar things?  I could have spent the entire evening going back and forth with tales, but eventually we're both moving parts to some larger drive train. It was a happy afternoon to be able to catch a fellow traveler for a few hours, and hopefully we'll find our paths intersecting again in the future. In case you didn't check it out already, you can follow his ride on Mike's blog!

Riding often inspires introspection and as I rode back, I pondered the motives of the solo rider. For me, there was never a question of who I would take off with; it was always going to be me and the bike (perhaps to the disappointment of romantic partners at the time). In my scooter, I’d found a partner that would push me as hard as I pushed her, and perhaps that's why riding took hold so well for me. Much of my life in Providence was solitary, but my bike was always there, rain or shine, ready to connect me to the outside if I just gave her the time. My bike could simultaneously challenge me and put me at ease, a treasure in any relationship.

Together, maybe we could go farther than most people would believe.
Posted by 250cc Superhero at 1:00 PM