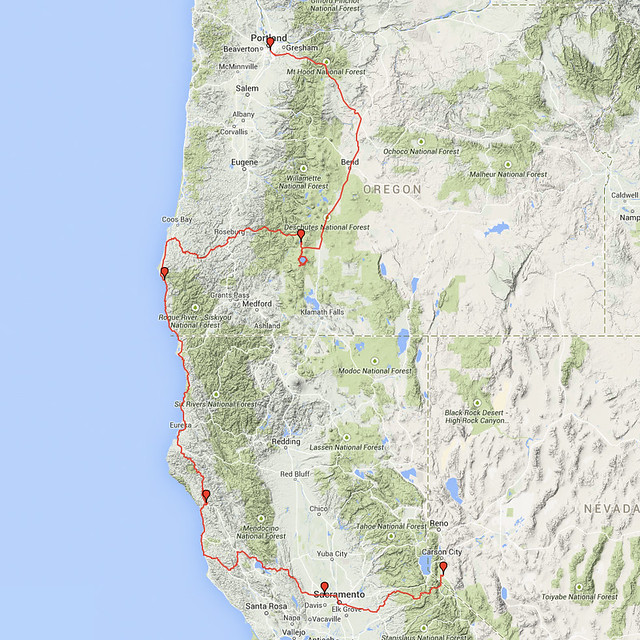 By the looks of this map, I'm making tracks. I suppose after the easy idleness of Seattle and Portland, I was ready to cover some distance. In this installment: Crater Lake, the Oregon coast, the beginning of the Pacific Coast Highway, a left turn for Sequoias, and twisty twisties.


First, welcome back to tent camping. Crater Lake campsites usually fill up and spill over the nearby Diamond Lake, so I was glad I headed to Diamond Lake first and snagged one of the few remaining spots. It's a peaceful lake, with a few general stores nearby and many dusty but private sites. My camping gear and I have reached an uneasy truce, and the crinkly unfurling of the tent felt like the equivalent of a tenty side-eye (just bear with the idea that tents have eyes). Undeterred, I set up early with the help of many four letter words, and decided there was enough light to ride around Crater Lake before dusk.


Crater Lake was formed by the collapsed volcano Mount Mazama, and is the deepest lake in the U.S. There are no outlets for this lake, it's made entirely of rain and snowfall. The little pointed island on the right is Wizard Island, which is a cinder cone left behind from the eruption 7,700 years ago.


The ride was absolutely terrific. The road was beautiful, winding, narrow and without guard rails. Occasionally a hapless rented RV would bulge over the double yellow lines and force me a few feet closer to a sheer hundred foot drop, but there's nothing like threat of imminent doom to keep you alert. Besides, riding along another volcano!


As the sun sank lower, the temperatures dropped as precipitously as the edge of the road. I quickly lost feeling in my fingers, and started shivering under my riding gear. But I couldn't turn away from the scenery.


Actually, I literally couldn't turn away, because there's only one road that goes around the crater. By the time I made it back to camp, the sun left only a bruised purple in the sky. I stood under the camp shower turned all the way to hot, but my fingers wouldn't return to me. It wasn't until I curled up fully dressed in my sleeping bag with a bit of jerky and whiskey that I could finally feel my fingertips again. Oh right, I was riding at around 6,000 feet above sea level and camping at 5,183 feet – it might be chilly.

That being said, it was bone-chillingly serene.

Somewhere along the scenic ride to the Oregon coast, I stopped by a small town's farmer's market (yay, Saturday?). Hot food was definitely happening, and some sweet local plums for dessert as well.

Humbug Mountain State Park was suggested to me by Don, whom I met in Choteau, MT. I'm so glad for the tip, what a beautiful location! I snuck in with the hiker bikers, and had a fantastic picnic dinner with cyclists from Germany and California.


As if to make a point, as soon as I crossed into California I was dumped sky high in redwoods. Just past Eureka, CA (which makes me think, "Oh no, Jack Carter, what will you do?!" even though I read later it's based in Oregon and filmed around Vancouver), I picked up the Avenue of the Giants.

Camp was set up in Leggett, CA, deep in Ewok territory. I shared some whiskey with Joel, a Triumph rider, (he seemed skeptical – to be fair I was offering from a mason jar with a sippy lid) and struck up a conversation with a family around a campfire. Cozying up to the flame, we talked about career because the son of the family wants to be an artist. His father asked me the classic question, "If money were no issue, what would you do?"

Bursting with bourbon-fueled honesty, I answered easily, "I would be here." And then I paused. "With slightly better gear."

I mean, I'm wary of that question. As I understand, it's an exercise to help you determine your true values, so that you may presumably better pursue them and find more fulfillment in life. But humans are fickle and shortsighted, and not all constraints are bad. What would I truly do? If you had asked me 15 years ago, I would have said draw every day. Ten years ago, I would have gone to Shaolin to train (I did, but only for a month). Five years ago, I would have said I'd give anything for all the training time and a serious coach to help me be the best fighter I could be. I didn't find a coach, but I found riding. That night, I told him with complete conviction, I wouldn't do anything different than be there with them, sharing a fire and some half-baked wisdom for future generations. I tried to give practical thoughts and advice on what day-to-day life is like for a working artist, but I'm cynical. I just hope their teenage son finds some useful tidbits, because I still cherished the interaction. In that moment, money notwithstanding, I wouldn't choose to be anywhere else.

They invited me for breakfast and I shared well wishes before retiring to my sleeping bag, but I knew I'd be up too early for them. Before I left in the morning I tucked a few cards into their picnic table, but there's a part of me that cringes every time I tell someone, Follow me at 250Superhero.blogspot.com. I'm not a superhero, the name was a joke from some old work. Sometimes it feels like I barely have the endurance to carry this trip out, let alone chase the dream of going international – taking on such added challenges as language barrier, cultural gaps, and the song and dance that always accompanies traveling alone as a female (basically, expect to work harder).

I was glad to put it out of mind, when I scooted to Joel's camp the next morning to share part of the ride south.


In spite of my questionable moonshine, he was up early and ready to ride. We were roughly headed the same way, me via Sacramento and him back to home base in Oakland. I led the way, hoping I wasn't slowing him down too much, and it was fantastic to have a road buddy again for just a while.

This is actually my second visit to Glass Beach. My first was part of a family trip in 2009 for my younger sister, Monica's, college graduation. Thing was, it was absorbed into a massive family reunion on my mother's side, and they decided to take a road trip to Mendicino county without much input from the graduate we were supposedly congratulating. Mostly, I recall not getting a wink of sleep due to the inescapable snoring from every descendent of that bloodline. Somewhere between sleep deprivation, we stopped by a beach that was renowned for washing up industrial debris made of sea-smoothed glass.

Over the years tourists have depleted the sea glass and it's no longer permitted to take any with you, but I still found the beach to be quite unusually glassy.

I said goodbye to Joel in Boonville, where CA-253 split from 128 to head towards Ukiah. He's heading to Australia this winter, to buy a motorcycle and ride for 3 months. Perhaps he'll post future adventures to his Twitter!

It was another day that started out with all the layers on, and ended with as few layers as possible. By the time I rolled into Sacramento, my temperature gauge read the highest it has yet, 42 C (~108 F).


My sister's friends from Hong Kong and Davis, Patty and Will, had a spare room for me in Woodland, CA. It was great catching up with them, being absorbed into a Chinese family dinner, and playing with their 6 cats. I passed along the dreaded, "If money were no issue..." question. Will responded that he would more or less turn his home into an enormous playground shelter for cats, and directed me to an example, the Cat House On The Kings. Well, now I feel selfish.

This is where the journey ends for now, only because I'd been riding quite hard with an increasing front-end wobble, and needed a rest. It seems after I realized I could ride 300-ish miles a day, it was hard to find reasons not to (thanks a lot, Davide). Find out what's in Gardnerville, NV in the next installment. Same scoot time, same scoot channel.
Posted by 250cc Superhero at 2:10 PM