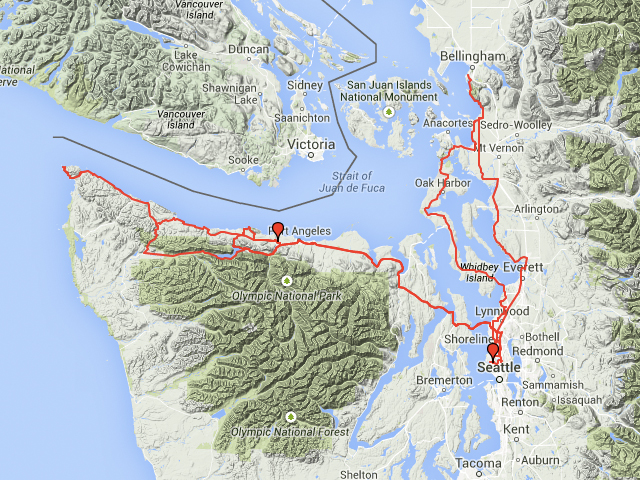 Of the US cities I know, my childhood hometown of Atlanta, GA was eerily foreign and familiar in the same breath. Madison, WI was comfortably recognizable after frequent visits to my sister's. However, if there's any city here that's like a second home for me, it would be Seattle, WA. In college years, I spent a summer here crashing with Grace in her studio apartment above Uwajimaya. From the International District, we walked everywhere or took the free bus. I was also here when Gwynne moved from Atlanta. Seattle is a place with an easy, natural history for me.

Also, timing was about right - the truth was, I was starting to get tired. Traveling on your own has many merits, but it implicitly means you do everything for yourself. A one-person circus — the research, accounting, transport, kitchen, manual labor, art, photography, PR, and what-have-you departments are just me. I'm use to wearing many hats as a freelancer, but by the time I rolled into Seattle I needed a rest.

First stop, Gwynne and Tom had a great weekend planned at his parent's place in Port Angeles.


In the push to make it to Seattle for the weekend jamboree, miles just became numbers that needed to add up. I followed the Volvo containing Gwynne, Tom, and Tim as far as the port of the Edmonds-Kingston ferry, where I darted ahead. That's when I smelled the saltwater of Puget Sound. It had been months since I smelled an ocean. It hit me then, the scale of what I'd accomplished. It took 13,000 miles or so, but I'd actually crossed the continent. Unlike a plane ride, I was intimately familiar with every mile. They seemed to hit me all at once and I wandered the half hour ferry ride too dumbstruck to be annoyed at the salt wind whipping my hair in my face.

It was nightfall by the time I reached Tom's remote childhood home. I was thankful for a hot shower and warm bed (benefits of arriving early with the hosts, ha ha ha), with no idea of how beautiful this spot actually was until the morning.

I felt a little guilty for napping prolifically instead of socializing, but they were such delicious naps. The breeze was cool, the sun was warm, the sounds of friends and water and a few attack ducks wrapped around me like a blanket. Through half-lidded eyes I drifted in and out of the brilliant blue beauty of Washington's second deepest lake. The world could wait.

Nasi goreng is a household dish in Dutch families, due to their history as colonizers (ah yes, the Dutch East Indies). At first, I was dubious of the pairing of cornichon pickles, but it's actually super tasty! Just goes to show, everything is better with pickles. And egg. And hot sauce. Good thing there's no shortage here. Unlike these legendary Dutch bread sprinkles, hagelslag, I kept hearing about.

Technically, Cape Alava on the Ozette Indian Reservation is the westernmost point in the 48 contiguous US states. However, it's only accessible by a 3 mile hike - no go with my ankle still mending. Tide depending, Cape Flattery is very nearly as far west though. In fact it looked like you could drive a scooter farther, have a scenic ride past Neah Bay, and hike a comfortable single mile to the cape. In the distance, you can see Cape Flattery Lighthouse on Tatoosh Island. The other thing I didn't realize I missed about oceans is the appearance of lighthouses.

Gazing westward I was conflicted, realizing I'd completed scooting to three out of the four corners that gave this trip framework. All things end, but I didn't want to pursue that last, easternmost point. I comforted myself with the reminder that my final corner in Lubec, ME wouldn't happen until 2015.


On the way back through Neah Bay, I noticed a sign advertising razor clam chowder, fry bread, and pie. I pulled a quick u-ey, and walked up to a house where I met Lila and Duane. They're up for running as two of the nicest people on the planet.


Within moments of meeting Lila, you could tell that she's the type of person who is the glue holding a community together. They welcomed me in like family, and I listened to stories about life in Neah Bay, family, and history. They're remarkably upbeat people, especially considering some of the stories of displacement they shared. Before I left, they fixed me up with fresh-picked ripe yellow plums, more chowder to go, and as much fry bread as I could carry. The chowder was delicious - big chunks of salted pork, potatoes, and razor clams - and kept me warm on the chilly sunset ferry ride back to Seattle. However, it's her fry bread recipe with butter and homemade apricot preserve that takes the cake. I thought of her as I nibbled my fry bread stash for days, but lacking preserves I paired it with cheese.

Maybe it's because I've known Gwynne since Atlanta days, but taking the ferry back to her place felt a bit like going home. Seattle and I, we get along pretty well. It's a big city, a port by the ocean, with cozy coffee cafes and bars aplenty. There's great food. I already know some people here. As the week played out, I settled into a groove of working at cafes and toyed with the idea of finding affordable housing or roommates, like a tongue playing with a loose tooth. It's expensive and winter is grey, but it's just wet, not freezing...


Also, I was floored by the bike scene. Backfire Motorcycle Night, which I thought was a casual evening out to park bikes around the local place, was packed in a way that reminded of Sturgis...but much better for diversity. It's refreshing to see multiple riding groups share a city - clearly, I'd been in RI too long.


Chas and I were both new to the route north, and I still chuckle inside remembering when we hit Deception Pass. I was riding behind him, and as the cliffs dropped away on the bridges I could see his helmet swiveling like crazy to take in the view. In my mind I could hear the dialogue, "What the... where did all this awesomeness come from?!" At least that's what I was thinking, and my helmet was probably spinning too, like a cartoon.


Before brunch, Gwynne, Tom and I visited Bruce and Brandon Lee's grave in Lake View Cemetery. The quote on Brandon's tombstone especially hit home with me.


Because we don't know when we will die, we get to think of life as an inexhaustible well. Yet everything happens a certain number of times, and a very small number, really. How many more times will you remember a certain afternoon of your childhood, some afternoon that's so deeply a part of your being that you can't even conceive of your life without it? Perhaps four or five time more. Perhaps not even that. How many times will you watch the full moon rise? Perhaps twenty. And yet it all seems limitless.

For Brandon and Eliza
Ever Joined in True Love's Beauty

When doing something like exploding your life to ride around the country, life seems to stretch out like the endless road in front of you. It's easy to forget how fleeting your time is. You take in moment after moment, gobbling them up with the miles. Yet it's journeys like these that will impact who you are, and who you will be to the people you're close to and the world around you. When your ride is done - and it will be done one day - what will be left?

I pondered on the beautiful but uneasy coexistence of the finite and infinite at brunch with the gang. Then it was off to our next adventure: urban canoeing! Bonus low-impact graffiti art.


When people ask if I miss Providence, RI, I answer honestly that I don't at all. I love being on the road, and Providence receded in my mind into just another place I'll pass through again at some point. But I miss people very often, and the easy-going nature of having a group of go-to buddies. Road friendships can be intense and last a lifetime, but can also be all too fleeting. I miss frivolous things like nail polish, and choosing a cute skirt to wear with leggings and boots in the fall. Super girly, yes, but at the core I realized it's about having options of self-expression. I was beginning to look forward being still for a while when I reached my cousin's place in San Jose, maybe join a rock climbing gym. Seattle was like a little taste of it. I liked just killing time with Gwynne and Megan at their place, doing day-to-day things like seeing if friends were around who wanted to get food. I liked going to the flea market, or just sitting in the livingroom streaming TV. I liked buzzing around the city with other riders, going to coffee shops in the day and bars at night (so many to choose from!).

As much as I wanted to asked Gwynne and Megan how much to rent out their guest room until further notice, it was too soon to sign any leases. Recharged and caffeinated, I was ready to hit the road.