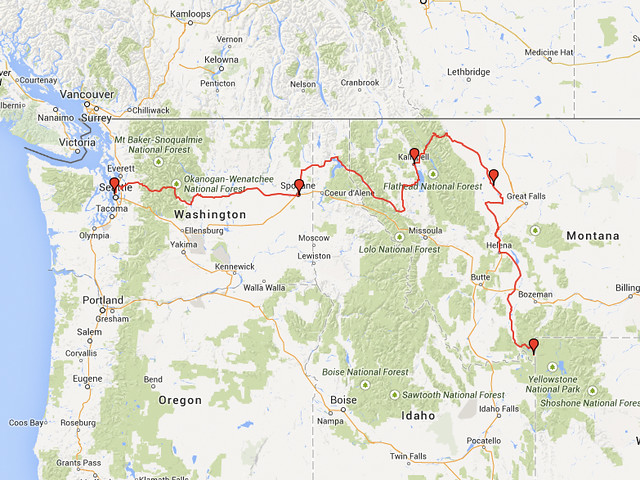 In part 2 of scenery overload, I fall into an unlikely gathering of likeminded travelers, and negotiate a state on fire to see my childhood friend.


I had been warned about Montana. It's the fourth largest state by area, after Alaska, Texas, and California. Reports were mixed, with beauty on one side and mind-boggling boredom on the other. My urbanite soul furrowed its well-groomed brows (did you know souls had eyebrows?), but in the end I had nothing to fear.

Montana is serene for riding, even in between the bugs and scenic bits. I loved how the roads carved easy winding paths through the golden hills, scattered with rocks. The emptiness is like that of Minnesota, but for whatever reason open ranch land sits better with me than miles of corn and soy. Maybe it's because I think cows, sheep, and goats are tasty.


I'd picked Choteau to be my overnight destination for distance purposes, but when I rolled in the campground I found online was closed. The city campground looked like a sad affair, exposed and facing industrial silos, but I'm glad I took the ranger's advice and crossed the creek around the bend. In a small tree-shaded grove, I found two BMW motorcycles, a cyclist, car, and car with camper.

As it turns out, the motorcycles belong to Voni and Paul Glaves. Voni is one of two women who have crossed a million miles on their BMWs. This happened to be one of their favorite campgrounds en route to Canadian destinations. They invited me to join them, which I was more than happy to!


I pitched my tent across from Aeurelie, cyclist extraordinaire from France. Admittedly, there is a part of me that feels like, "What kind of person spends their vacation flying thousands of miles to a foreign country, to bicycle around the backwaters that even locals don't bother with?" I have much respect for cyclists.


There was a fire ban on, but we sat in a loose circle on the grass and shared beer and stories into the evening. In the morning all five of us packed up camp and vanished without a trace, in the words of car camper Don, "Like soap bubbles." I'd picked Choteau because it was about the right distance on the map for me to reach Glacier National Park, it was a crazy kind of serendipity to meet such a great group of travelers. I like to think even though we were all just passing through, we shared something in common in our approach to the world.


I passed Auerelie shortly outside the city limits and waved, and Voni and Paul passed me at a gas station break and waved. I liked thinking of them sharing the same road, but in different modes of transport. While I fantasized about a cushy BMW for my next ride, the awesome mountains of Glacier National Park rose in the distance.

Around bends, I could see Going To The Sun Road (Rt 2 between St Mary and West Glacier, MT) hugging the cliffside into the distance, a faint diagonal scratch in the mountains. I was spellbound, and couldn't stop taking photos. It's a double-edged sword, because I love having the photos afterwards, but I would love to come back and ride it again without breaking pace so often.

I considered riding farther to Libby, MT as per Paul and Voni's suggestion, but in the end I admit to having a smaller, more exhausting bike. It works out for the deliberate, slower pace it enforces, otherwise I wouldn't have met my Couchsurfing host, Art, in Kalispell. I wonder if I'd be able to contain myself on a comfy faster bike, swallowing up miles and perhaps passing beautiful experiences. Maybe later on, I'll develop more self-control (don't hold your breath).

Art and his wife invited me along to a boat trip with old friends, on Flathead Lake.


I've never seen a drive up espresso shack, but apparently I'll be seeing more because they're quite common from here on west. I was so excited by the novelty of it, she gave me the cup on the house.


When I finally left Montana and crossed into Washington, I was irritated to immediately find myself in Spokane city traffic. The mountain wilderness that seemed to stretch blissfully into eternity now felt so brief behind me. Still, those miles were under my wheels and in my muscles, I was exhausted. It was a pleasant relief that my CS host, Jill, offered me to take a bath in her luxurious free-standing bathtub (I sort of wish I took photos). She has a beautiful, artistic home. After my tension had melted into hot water, we went to Neato Burrito for Broken Mic night, spoken word performance. It's the little things.

Later, I'd hear from Jill that she bought a Vespa GTS! Just spreading the word.


As I rolled out of Spokane, I received a text message from Gwynne in Seattle: "Be careful out in eastern Washington - I heard there may be flash floods, dust storms, and wild fires between you and Seattle. So you know, watch out for Sauron and ring wraiths and shit."

The warning couldn't be more apt. The 303 miles between me and an izakaya dinner with Gwynne saw a war of weather patterns. There was smoke from fire that blackened tissues when I wiped my face. There was rain and wind, and cold that numbed my fingers. The road was still slick with mud from a recent mudslide in one part. There was lightning, which caused a blackout in the town I had counted on finding gas. I tried to massage feeling back into my freezing hands (exercise in futility) and soggily rode on, rolling into the next town's gas station just as my fuel light went on. I was shivering, damp, and tired, but visions of tasty small plates of Japanese food drove me harder than the rain.


I don't know when exactly it happened. At the surreal "Bavarian Village" of Leavenworth, I still had over a 100 miles to go. In another situation, I might have appreciated the quaint faux-European-ness in an area some call the American Alps. The skies had cleared somewhat, but I was buried neck deep in bumper to mudguard traffic, screaming children, and tour groups. I considered pulling off for a break, but everything looked expensive and crowded. Subsequent gas and rest stops were swarming with smiling, carefree tourists, putting in sharp contrast my cold, stiff, uncomfortable perch on two wheels. I don't remember what it was that pushed me over the edge, maybe a little of everything. Somewhere in the Okanogan-Wenatchee National Forest my brain ticked over, and I gave in. Fuck it. I've been conserving gas for most of the trip, we're opening this up. Fuck. It. Aaalllll.

I cranked the volume to its max and banged the throttle wide open. The needle climbed past 70...80... as fast as I could take the curves. Trees blurred into a green tunnel around me, and I passed cars with an impetuous impunity. If I could have ridden without my hands, I would have thrown both arms into the air with two middle fingers raised high. For the loud parents and their obnoxious offspring. For the storm and the shitty road conditions. For the stupid people who thought this was all fun and games. For things in the world I knew I had no power over, didn't deserve my rage, or would do no good getting angry at. Fuck them all. I let anger consume me, embraced the futility of human emotion, spurred my 250cc to its top end, and screamed lyrics tunelessly to my chin guard in a duet with the screaming of my engine. The Roar had just taken on a new quality, and I was glad I didn't have a bigger bike. Beware the crazy, angry scooterist.


At Steven's Pass, the world disappeared in a blanket of white fog. If hitting the pea-soup-thick fog made a sound effect, it would be, "PHOOWF." The fog could have lasted a minute or forever, there was no way to tell. Just an unending silvery white, an Apple store's dream. For a second you think the ground has dropped away, but actually it's because you've cleared the summit and have descended out of the clouds on the other side ("WHOOMF"). And it's beautiful. The trees were different - greener, more lush. The air smelled like a good gin. The fog wiped out the turbulent world before, and replaced it with a slightly more delicious version. The rage receded. It felt like I'd just beat a boss level, saved the forest, and now pixelated little forest animals were going to come party with me.

It's not always bad to be angry. I think this is the very definition of catharsis.


Gwynne, my childhood friend who's close enough to be a sister, was waiting in Ballard. I knew I had the right place when I saw the red Georgia flag. I had time for a shower, and then it was time for a victory feast of grilled tuna collar.
Posted by 250cc Superhero at 12:57 PM